In the past few years, BMW’s design department has been serving some looks, and the new one isn’t breaking that pattern. Feast your eyes upon the XM Concept from BMW’s M Division. The XM, when it enters production later this year, will be only the second-ever M-exclusive model, after the vaunted 1978 M1. M turns 50 this year, so this is quite a special occasion. And while some people may have expected maybe, you know, a sports car – a new M1 or something – BMW M CEO Frank Van Meel reckons the SUV is as much a part of the current zeitgeist as the M1 was a part of its own. Oh, and the XM kind of is a sports car. Read on. 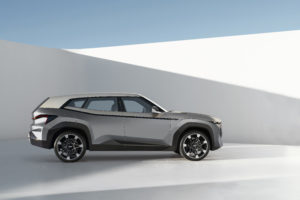 Scale can be misleading with concept cars. For context, those are 23s the XM is sitting on, and the whole thing is around the size of an X7, more or less. Speaking of scale, look at that grille. We actually think it’s more successful here than on the M3 and M4, proportion-wise, and the gap below the grille gives us hope that it won’t be bisected by a number plate later. The rim of the grille lights up, and those wee triangles below the bonnet are daytime-running lights; the real headlights are hidden below, behind translucent black plastic. An eye-catching black strip conceals the door handles and serves as a border between the two paint tones – silver and a light rose gold here – and almost, but not quite, outlines BMW’s traditional Hofmeister kink. Almost. The rear offers vertically stacked exhaust pipes, scythe-shaped lights, and one legitimately cool homage – two BMW badges, etched directly into the glass of the notched rear window, the shape of which echoes the rear of the M1. 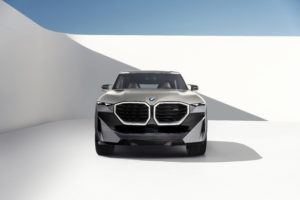 Say what you want about the chunky exterior, but the inside is gorgeous. A big curved screen fills the dash, the chunky seats are covered in weathered brown leather and the rest is carbon fibre. The rear passenger compartment – or ‘M Lounge’, if you will – is wildly different from the front row. The backrests are a 50/50 horizontal split between sporty moulded leather and quilted satin-look teal fabric, which carries over to the bench seat – so it’s somewhere between the bridge of the Starship Enterprise and Elton John’s lounge. It really is quite striking. And when you take into account the shag carpet at your feet, ample leg room and the indirectly lit three-dimensional polygonal moulding covering the ceiling, it certainly looks like a very comfortable place to be. 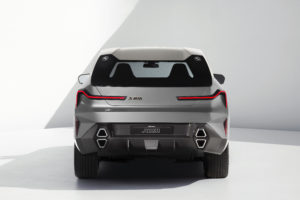 The production XM will release in a very similar state to the concept, and will be built in the US, with price estimates from $150k–$200k. That’s nearly 3.2 million randelas, but well, this is the first M hybrid – a plug-in – and its new flagship. Oh yes, we haven’t mentioned the 4.4 L twin-turbo V8 hybrid engine, which pushes out 550 kW and 1 000 Nm of torque. This will be the most powerful production car BMW M has ever made. The XM will compete with the likes of the Lambo Urus and the Porsche Cayenne Turbo S E-Hybrid, and it will smoke them both – BMW is looking for a new Nordschleife record, and that’s not hyperbole. And M claims it’ll do 80 km on battery power only, which is handy. And it does look like an almost indecently luxurious ride. People will either love it or hate it, but they’ll definitely feel something, and isn’t that what strong design is about? BMW may also see this as a massive family car, but honestly, we wouldn’t want a toddler within a mile of those seats, front or back. It hasn’t been confirmed for SA yet, but we understand the XM will be exported. Fingers crossed.