It’s been nearly two months since I’ve attended an in-person car launch and like an addict that’s gone cold-turkey I’ve been desperately itching for a spirited drive. With some world-class roads at our disposal in the Western Cape, the local launch of the new Volkswagen Golf GTI could not have come at a better time. Armed with my hookah pipe in the boot, cap turned backwards and vape in my hand it’s time for a drive.

All too keen to get the GTI on the road I lowered myself into the heavily bolstered tri-colour perforated leather bucket seats. These sporty-looking chairs are electrically adjustable and now have one-piece backrests not too dissimilar to those items found in performance focused Audi products.

Once comfortable in my driving position I pressed the pulsating red start button on the piano-black centre console and fired it up to hear a gentle yet confident purr. Next, I selected the “mode” touch-based button on the facia. This brings up the vehicle’s drive-mode menu and then I engage the Sport setting on the 10-inch HD infotainment screen. Of course, a high-paced 200+ km round trip ensued.

Our route took us from Constantia to the M3 and then down on to the N2 highway towards Grabouw. We then headed towards Stellenbosch via the gorgeous serpentine Franschoek Pass. I put my foot down as soon as the opportunity arose and blitzed the 90 km stretch between our start and just outside of Villiersdorp. On this leg of the drive it became clear that the new GTI is an impressive high-speed cruiser as it simply devoured this stretch of the N2 with shocking ease. 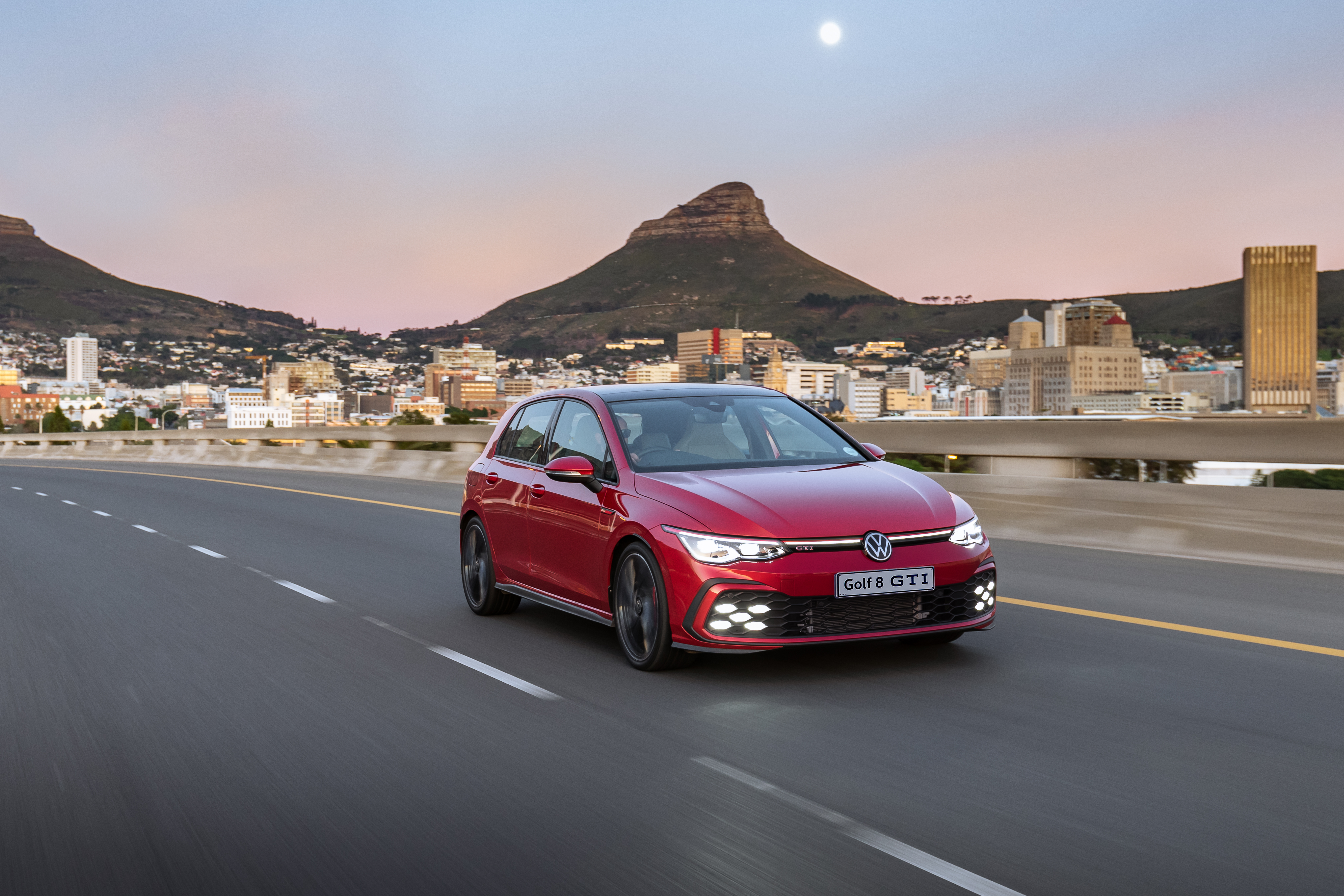 Powered by the VW group’s familiar EA888 2.0-litre four-cylinder turbocharged petrol engine there’s not much different than before on first inspection at least. We know this engine from the outgoing Golf R, Tiguan, T-Roc and a host of Audi-badged products. This latest version of VAG’s four-banger has new fuel injectors and in Mk8 GTI guise it’s tuned to deliver a meaty 180 kW at 6 500 rpm and 370 Nm between 1 600-4 300 rpm, representing an increase of 11 kW and 20 Nm over the outgoing Mk7.5 GTI. On paper these are not significant numbers but as I would soon discover the added poke can be felt.

Grunt is sent to the front wheels via a quick-shifting 7-speed dual-clutch (DSG) and an electronic clutch-based limited-slip differential (VAQ) works together with the three stage ESC system to put the power down to the tar. This new GTI can turn the ESC fully off, something the Mk7 did not allow. The benchmark 0-100 km/h sprint comes in at a claimed 6.4 seconds and if given the space it’ll run on to an electronically limited top speed of 250 km/h. The motor provides a pretty fierce thrust that allows brisk overtaking to be conducted effortlessly. I suspect that VW have under quoted their 370 Nm figure here. As I found on the highway section of the drive it’s in-gear acceleration is far more potent than you’d expect it to be.

The suspension has been tweaked with the front-axel subframe now made of aluminium rather than steel. This saves 6 kg which sounds like a marketing nonsense but this is unsprung mass at the lowest part of the car and this new development has done wonders for the sense of front-end agility. The spring rates have been adjusted too and are increased by 5% at the front and 15% for the rear. Optional electronically controlled shock absorbers (DCC) are able to adapt the individual wheel damping up to 200 times a second and this gives the GTI a composed and confidence-inspiring character when driving hard but more on that just in a moment. The steering setup has also been updated and is now devastatingly responsive with just 2.1 turns needed to go from lock-to-lock.

After what seemed to be very little time spent behind the wheel the flowing ribbon of tarmac that is the Franschoek Pass came in to view. After faffing my way through the vehicle’s frustrating and numerous on-screen menus I eventually found how to turn ESC off and opted to change gear using the steering-mounted paddles. Primed and ready it was time to grow horns and see what the new hot hatch was all about. In short, this GTI is tauter, pointier, more direct and more lively to drive than the old GTI. The rear end is pleasantly mobile and rotates naturally when turning in at speed. The old car would never and this refreshing engagement from the chassis is welcome. What’s bizarre is that it’s a comparative porker on paper at well over 165 kg heavier than the outgoing car. Despite carrying the equivalent of both Rachel and Siya Kolisi trapped in the boot (keeping the Hookah safe I suppose) the Mk8 demonstrated an improved sense of it’s fleet-footed athleticism. It’s easy to drive quickly and you get the sense that the chassis could deal with even more power through the front wheels.

The sightly damp road surface didn’t really faze and grip from the Bridgestone Potenzas either with traction aided considerably by the differential on the way out of a corner. I could have my foot buried in the carpet on sweeping bends and the front would dig into the tar and slingshot the vehicle out the other side. You can feel the differential do it’s best to manage the scenario and the steering will gently tug towards the apex as the inside front brake is called into action to assist the turn in. Only at heinous speeds on tight hair-pin bends did I experience some under-steer as the front tyres protested with baleful shrieking.

The engine has very little lag and pulls heartily from low down the rev range, the gearshift is slick and fast although it will change up automatically even when using the paddles which is frustrating on a road that is best exploited at high revs and in a lower gear. The engine sound is muted and unfortunately synthetic too with a deep bass played through the stereo but from the outside onlookers can enjoy the typical VrrrPha! exhaust whip-cracks on full-bore upshifts. The brakes are powerful but are a little too fierce at the top of the pedal making it tricky to slow down smoothly.

After this short yet epic blast up the mountain I had to get out of the car to catch my breath and let the adrenalin-induced shakes pass through my hands and feet. I thought to myself in that moment, that the Golf GTI has grown up to be a deeply impressive agile, refined and wickedly fast hot hatch. It’s not as hardcore as a Hyundai i30 N or Renault RS but it’s mature demeanor will appeal to more drivers. Compared to the Mk7 GTI, a vehicle we highly recommend, the 8 has moved the game on in nearly every respect. We look forward to conducting a more extensive and in-depth test so subscribers keep an eye out for your next MOTOR magazine delivery.

Potent in-gear acceleration, usable grip and high levels of comfort and refinement make this an excellent high-speed cruiser. For around R670k as standard what more could you ask for?

No option for a manual transmission. Button-less interior and new haptic-feedback controls will take getting used to, new infotainment system not as user friendly as older VW products