Are you an outdoorsy type that loves to spend time after work and on the weekends out and about? Maybe you’re single and enjoy outings with your mates. You describe yourself as someone with an “active lifestyle”. You like to go to the beach, are keen on hiking or enjoy a cycle through the country side to unwind and recharge for the week to come. Perhaps you’re looking for a new car, too, but you’re unsure about what to get. We live in a time where we have more choice than ever. Should you go for the compact looks and fuel economy of a hatchback or the style and tall-riding stance that a crossover has to offer? We got hold of Audi’s smallest crossover the recently updated Q2 in 35 TFSI in S-line guise and the A1 Sportback in 30 TFSI Advanced trim to see which vehicle is best. 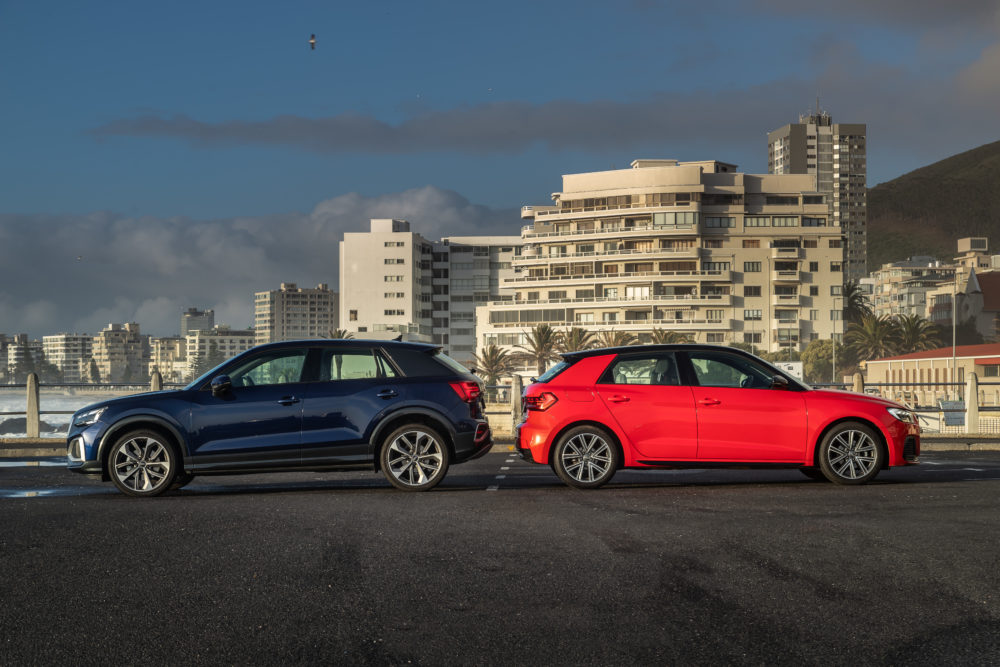 Dressed in pearl effect Mesano Red, the second-generation A1 Sportback cuts a dashing figure, especially when the contrasting black roof is specified. Viewed from the front, gone is the previous iteration’s rounded-off hexagonal grille, replaced by an edgier and larger interpretation the little A1 looks much more aggressive than before. Above this item, and at the edge of the bonnet, are three slits, paying tribute to Audi’s 1984 Sport Quattro Group B rally car which no doubt add to it’s purposeful look.

Sited at opposite sides of the revised bumper, the headlamps feature LED daytime running lights these are R15 640 optional extras on this base 30 TFSI but come as standard on the 34 TFSI. Items bearing a similar pattern are also found at the rear, adding to the A1 Sportback’s signature design-cues. The sloping roofline and those enlarged colour-coded C-pillars lend the small hatchback a taut figure. 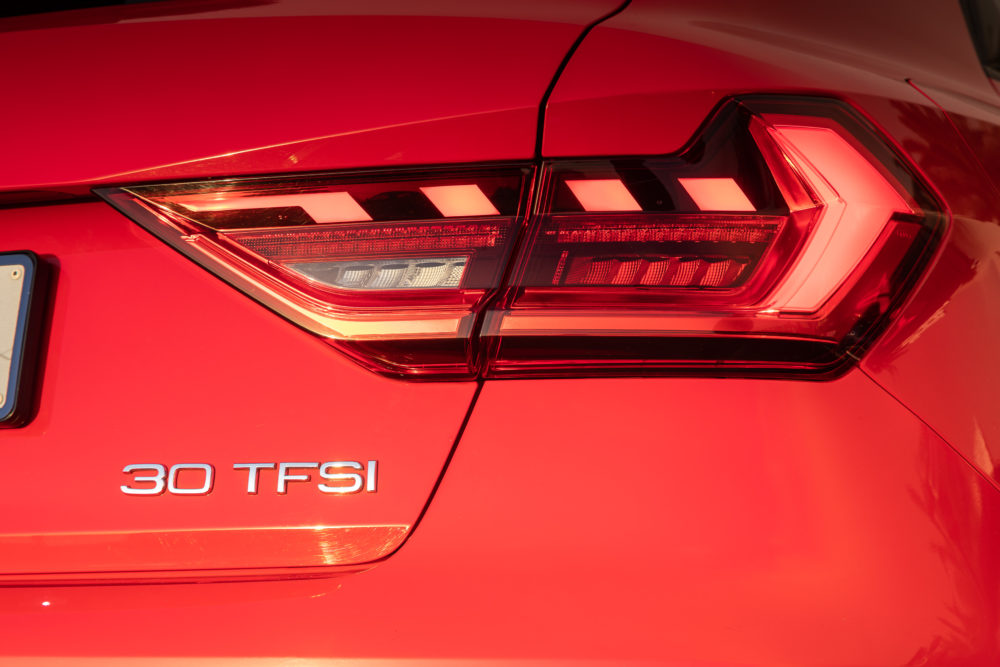 The sharp lines are carried over to the highly customisable cabin, where the 8.8-inch touchscreen display and dual-zone climate control system (included, with cruise control and extra storage, in the optional R10 800 Comfort package) are angled heavily towards the driver for easy access while on the move. Of course, most functions can be operated via the leather-clad multifunction steering wheel in which case is a sporty flat bottomed unit with paddle shifters. 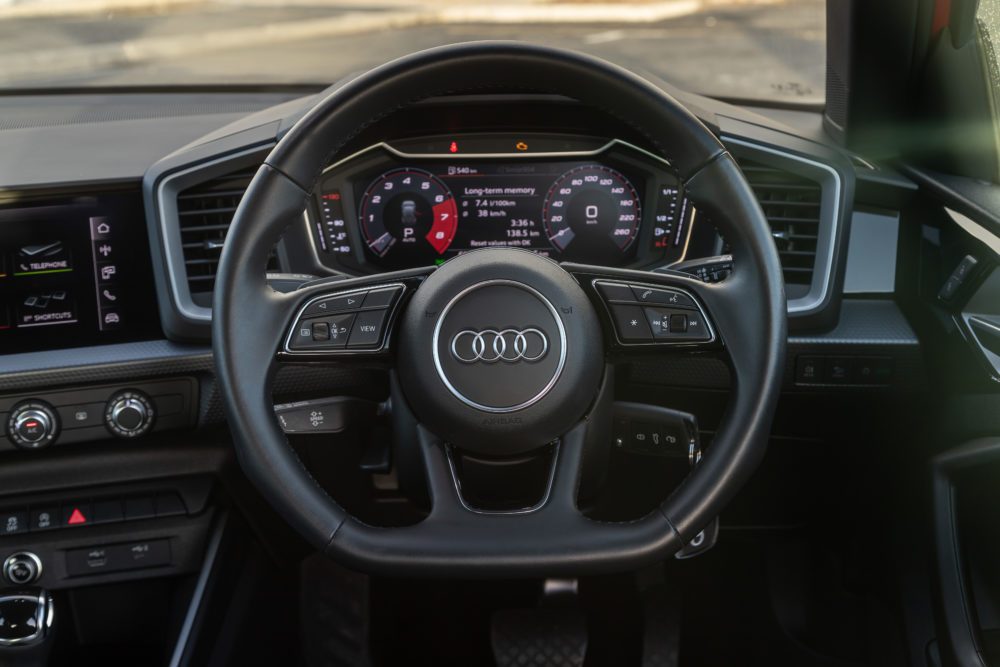 Although digital instrumentation is standard, I would gladly spend the extra R10 400 and specify the Technology package, which adds Audi’s intuitive virtual cockpit, a smartphone interface offering screen mirroring functionality and an improved sound system.

The multi-spoke 16-inch style wheels looks great and unlike cars fitted with larger items on rougher roads the smaller wheels with more tyre side wall do a great job of soaking up road imperfections. Once heading out to one of our favourite mountain passes this gave the A1 Sportback the opportunity to stretch its legs. 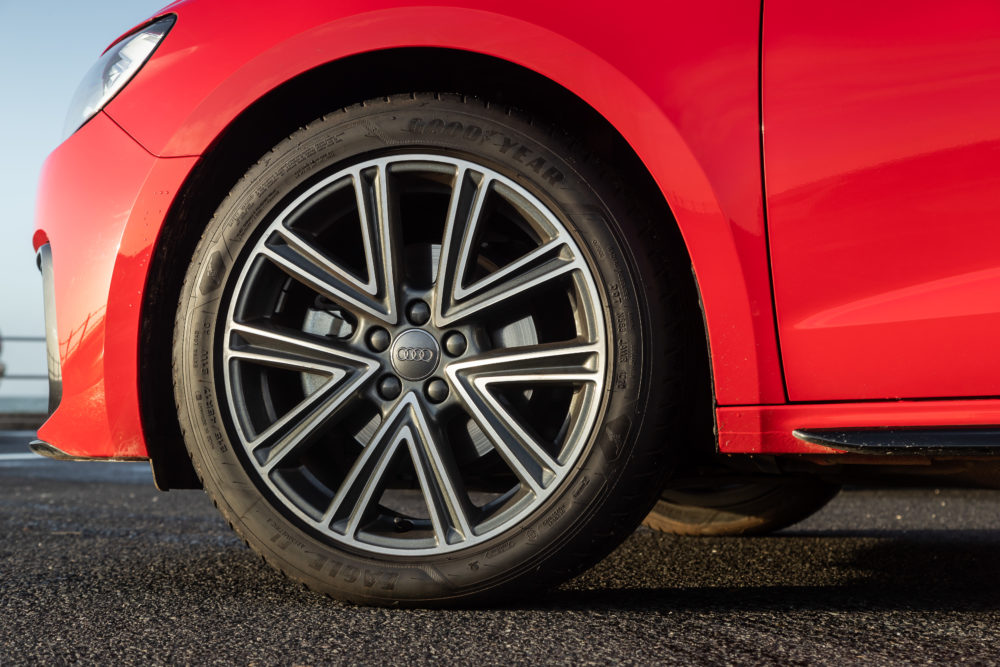 Its 85 kW/ 200 Nm power plant proved more than sufficient when negotiating the countryside. Although this is a city slicker, tackling longer journeys are certainly not out of the question. Overtaking should, however, be performed with consideration, as the turbocharger takes some time to react before the hatch sets off to complete dash from 80 to 120 km/h. Switch the driving mode to dynamic and slot the transmission into its sportiest setting, though, and you’ll largely mitigate this concern. 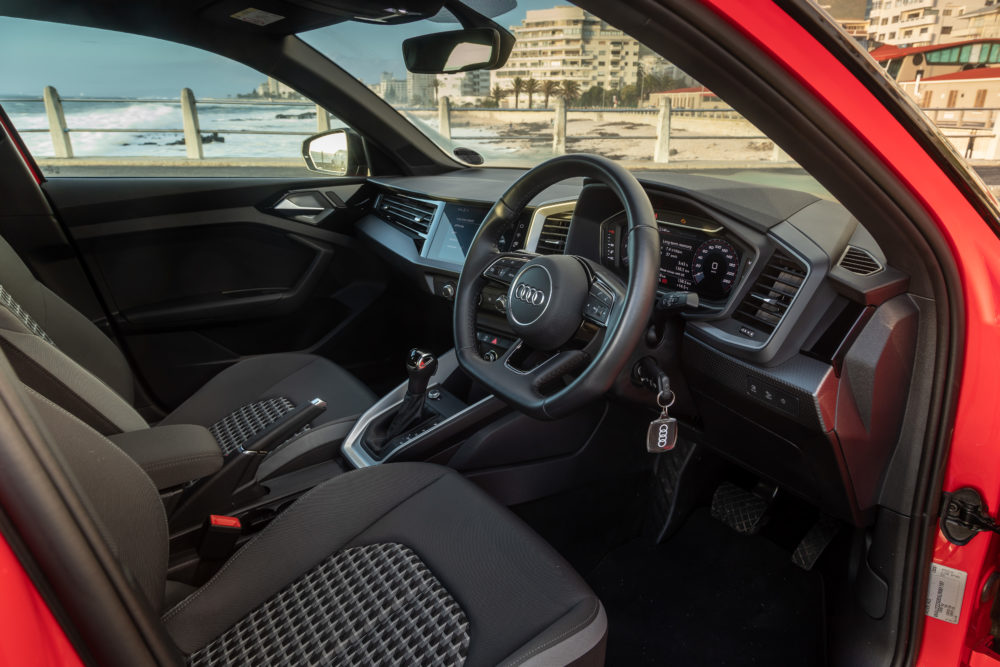 Gone is the 1.0-litre TFSI found in the A1, leaving the 1.4-litre turbo petrol unit, with 110 kW and 250 Nm, as the only engine to choose from. Power is sent exclusively to the front axle via an eight-speed automatic gearbox rather than the previous 7-speed dual-clutch.

The most notable changes are to the exterior for this facelift includes a slightly more chiseled look compared to its predecessor. There’s a new rear bumper, rear diffuser and the exhaust pipes aren’t visible like they were before. A new headlight design on the front and rear culminate in a more up-to-date look in line with the rest of the models in the range. 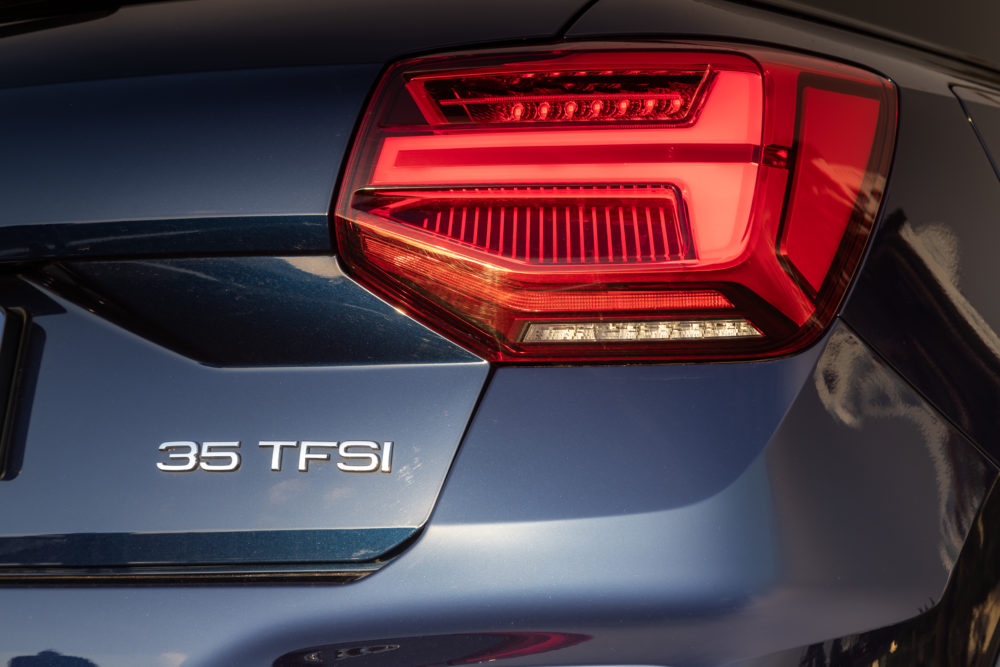 Small crossovers like the Audi Q2 tend to excel in narrow city streets, I found it to be thoroughly reassuring on some of the Western Cape’s more flowing and high speed roads too. The turbo petrol has enough oomph when called upon to overtake or even cruise at the legal speed limit. Our test unit with the S line package comes with a lower and firmer suspension and when teamed with large 19-inch alloy wheels the ride can feel a bit busy at low speed.

The cabin is well insulated though and feels nearly as refined as the larger Q3. The eight-speed automatic is smooth and doesn’t labour the engine in gear using the forced induction engine’s torque band surprisingly well.

The Q2 is offered with plethora of optional equipment which has been wrapped and bow-tied in separate packages, namely Comfort, Technology and Black Styling. The Comfort Package (R17 800) includes an electric tailgate; four-way lumbar support; seat heaters in front; storage and luggage compartment package with two rear USB ports. A Technology Package (R35 200) ups the ante inside by fitting MMI navigation plus; Audi smartphone interface and the brand’s virtual cockpit. 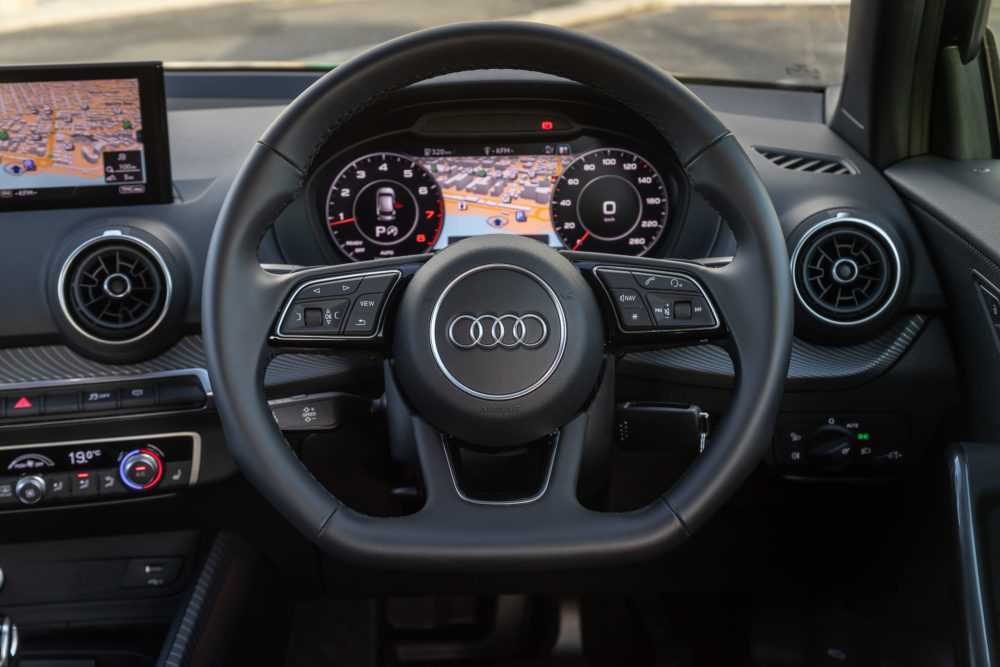 Possibly the most popular package of the four is the Black styling (R18 500), which is only available on the Advanced and S line models and includes black treatment for the grille surround, front and rear bumper trims, exterior mirrors and side blade. The 19-inch 10-spoke Y style wheels are finished in black too and the vehicle is fitted with sports suspension. 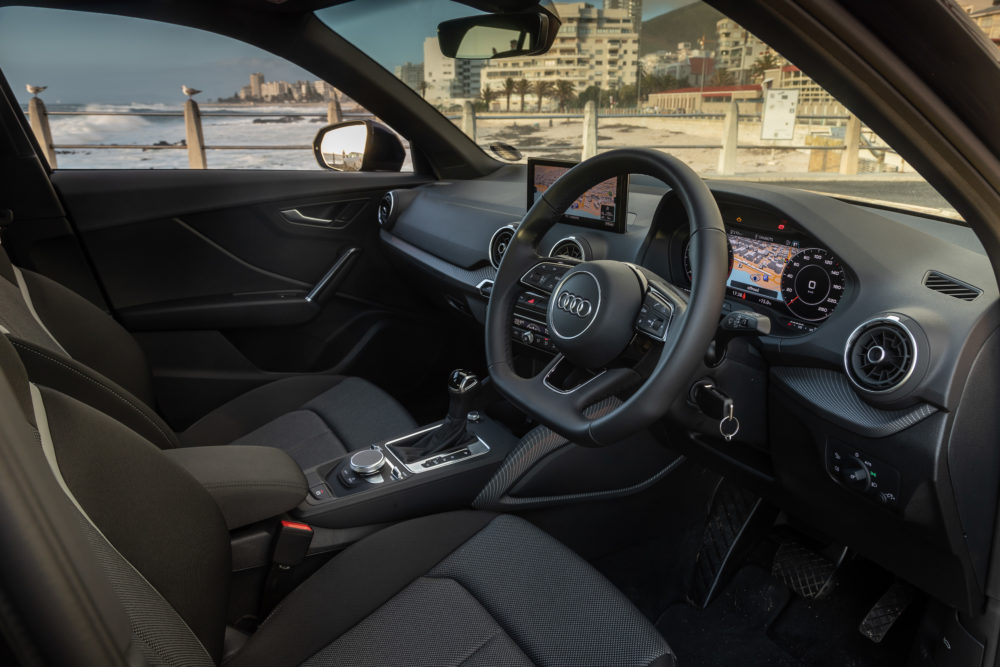 Over the years, crossovers have become popular players with their larger bodies, greater interior space, usable luggage areas and higher ride height. On the other hand, hatchbacks offer more versatility than similarly sized sedans and are known for offering great fuel economy, better dynamics than crossovers, and a smaller body, which could be good if you’re limited to street parking or tight parking spaces. In this twin test the Audi Q2 simply looks too expensive when compared to the A1 before options. Sure it’s the more fashionable option but it doesn’t provide significantly more interior space and the ride is not far more comfortable than its sibling despite the added suspension travel. At R133 500 cheaper the A1 30 TFSI covers most bases thanks to a well thought out cabin, efficient yet punchy engine and purposeful looks. 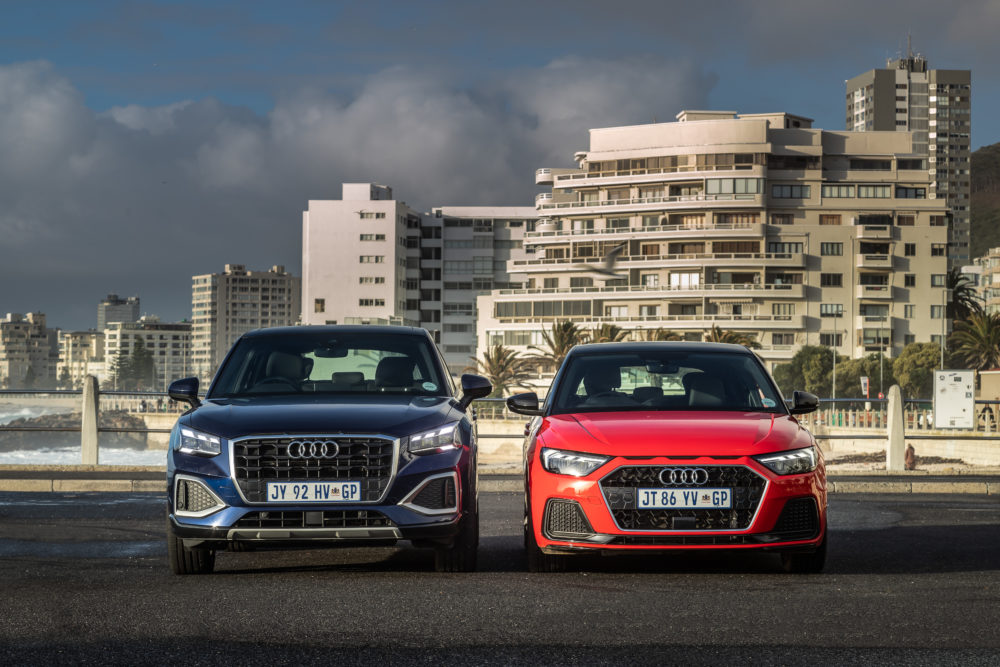 The efficient 1.0-litre 85 kW drivetrain is punchy around town and relaxed on the open road 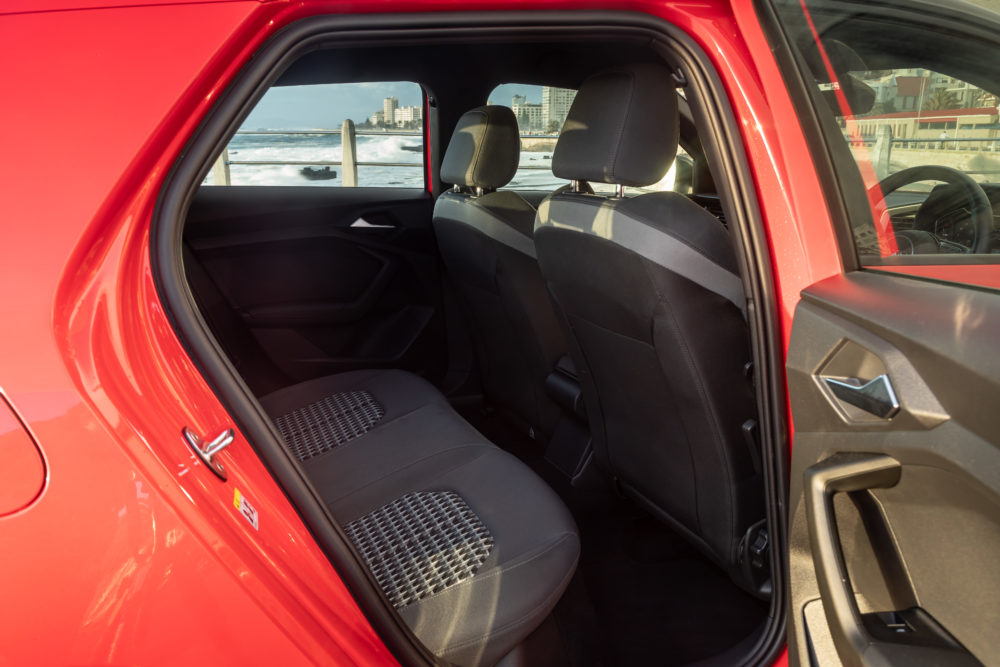 The S line sports suspension doesn’t do the ride any favours, not as spacious as you’d think 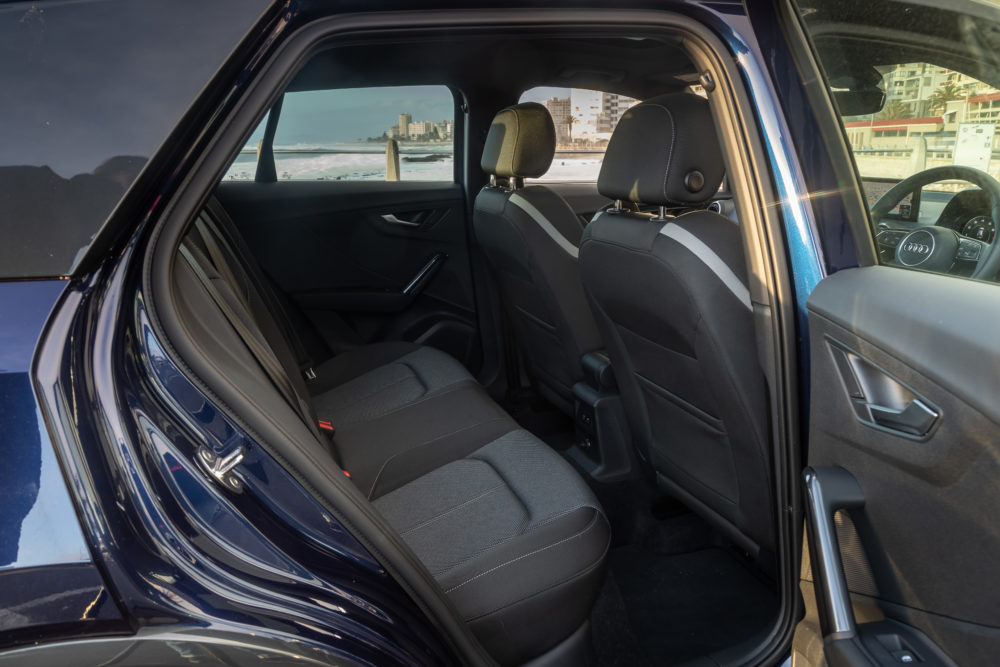 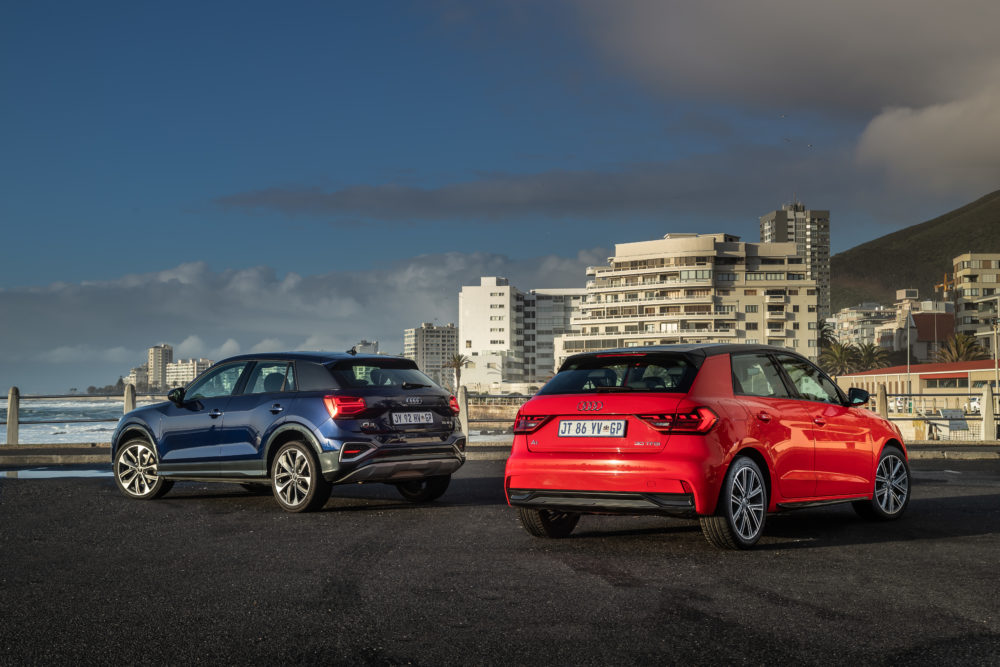