The Ferrari 812 Competizione, the new limited-edition special series car derived from the 812 Superfast has been revealed along with the 812 Competizione A (Aperta), a targa-top version of the limited-series model. This duo of cars is dedicated to a very exclusive group of collectors and enthusiasts.

The 812 Competizione and 812 Competizione A sport the most exhilarating V12 on the automotive scene and is derived from the multi-award-winning engine powering the 812 Superfast. The result is a naturally-aspirated 610 kW engine that pairs impressive power with electrifying delivery and the inimitable soundtrack that Ferrari V12 purists know well. To boost the output of the engine several areas have been significantly re- engineered to achieve a new record red line while optimising the fluid-dynamics of the intake system and combustion, and reducing internal friction. 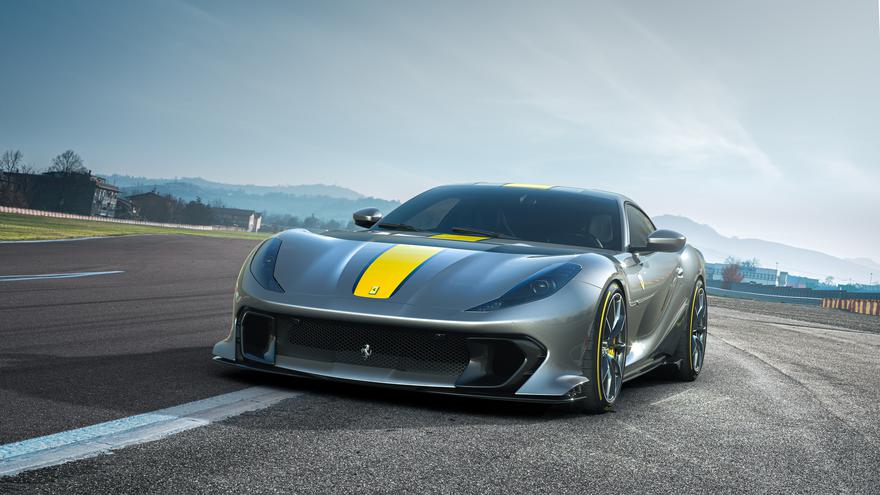 Maximum revs are now 9 500 rpm which, together with a rising crescendo of torque delivery. The titanium con-rods are 40% lighter than steel versions whilst delivering the same mechanical resistance; the piston pins, on the other hand, have been given a diamond-like carbon (DLC) coating to reduce the coefficient of friction to the benefit of performance, fuel consumption and wear. These modifications are combined with a rebalanced crankshaft, which is also 3 percent lighter than the previous version.

The most significant improvements, however, are to the distribution and the cylinder heads, which have both been completely redesigned. The cams (which now feature DLC coating) now action the valve stems via DLC-coated steel sliding finger followers, which are derived from Ferrari’s F1 experience and were developed specifically for this engine to provide a higher lift profile. 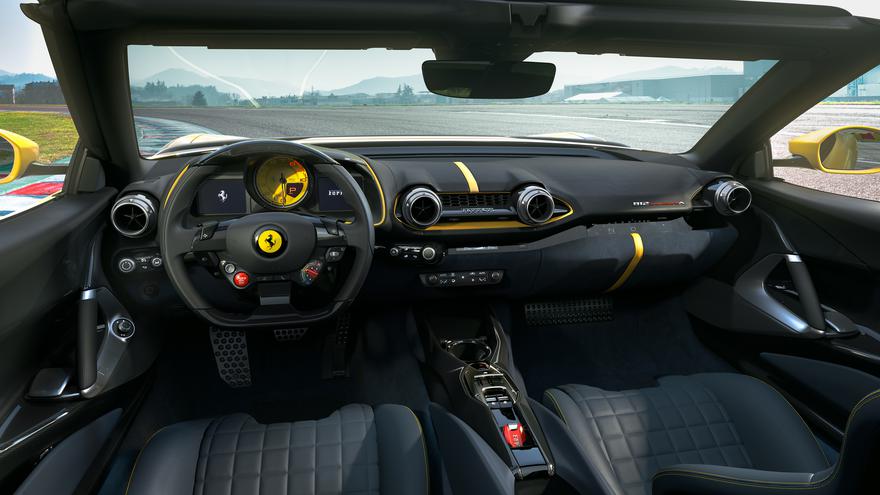 Both the 812 Competizione and 812 Competizione A are equipped with a seven-speed dual-clutch gearbox. Calibration of the control strategies has reduced shift times by a further 5 percent. Although it retains the same gear ratios as the 812 Superfast, the new car’s changes are even more sporty, thanks to the extra 500 rpm in maximum revs allowed by the new V12.

The 812 Competizione adopts an integrated solution with a single air duct. This allowed the intake for the engine radiators to be extended sideways as far as the chassis allowed as well as reducing not just weight, but also losses to the intake plenum and thus the combustion chamber, which in turn, improved the overall performance.

The shape of the engine vents either side of the bonnet’s blade is designed to guarantee correct management of the flows even when the 812 Competizione A is being driven in the open configuration: the hot air flow lines are deviated away from the cockpit and are channelled along the flanks until they eventually merge with the car’s wake.

Brake cooling is fundamental to avoiding compromising on either downforce generation at the front of the car or on the weight of the brakes themselves. Compared to the 812 Superfast, the brake cooling concept was completely redesigned around the new front “Aero” calliper which debuted on the SF90 Stradale and which has an air intake integrated into its casting. 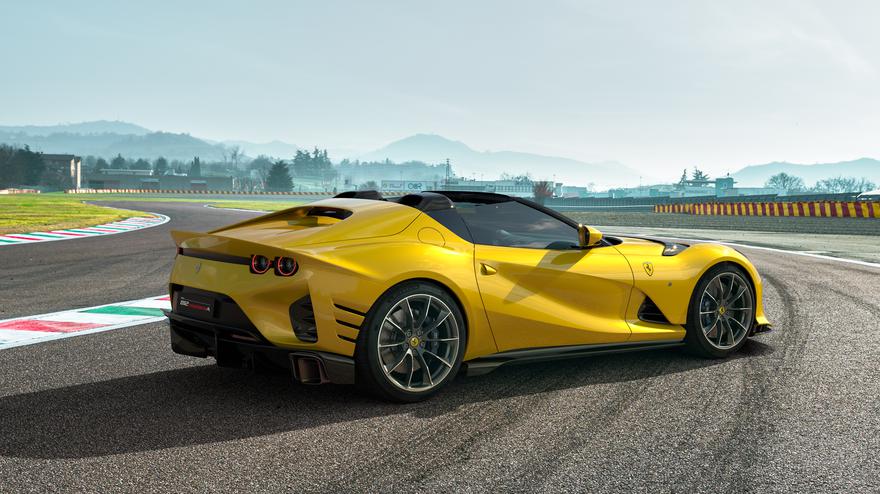 Ventilation of the callipers and the pads is achieved by channelling the cool air captured by the generous opening on the side of the bumper towards the integrated air intake which then distributes the air flow inside the component. Two carbon-fibre side air intakes for the brakes flank the main grille, which feeds cooling air to the engine and cockpit. These intakes are square in section and are split between brake cooling and a double air curtain duct. Thanks to the latter, the charged flow that strikes the side of the bumper is channelled and used to reduce the turbulence generated by the outer part of the tyre tread, thereby improving the front downforce generated by the outside edge of the bumpers.

The three horizontal slots on the side of the rear bumper just behind the rear wheel are another visually striking novelty. In addition to recalling the F12tdf, they also hide a system of three aerodynamic flicks. Due to the low-pressure area created by the car’s wake, part of the flow downstream of the rear wheel naturally tends to be drawn towards the centre of the car. However, with this new solution, it enters the bumper through the three horizontal slots and is then deflected upwards by the internal flicks, contributing to rear downforce.