Handsome as it was in its own right, the previous-generation Sorento wanted for some visual impact in a segment where many rivals had ditched the smooth-skinned, softly-softly approach to SUV design in favour of more muscular lines. The same criticism certainly can’t be levelled at the new Sorento, drawing as it does from the bluff-sided, tough-looking (and sadly unavailable in RHD markets) Telluride. 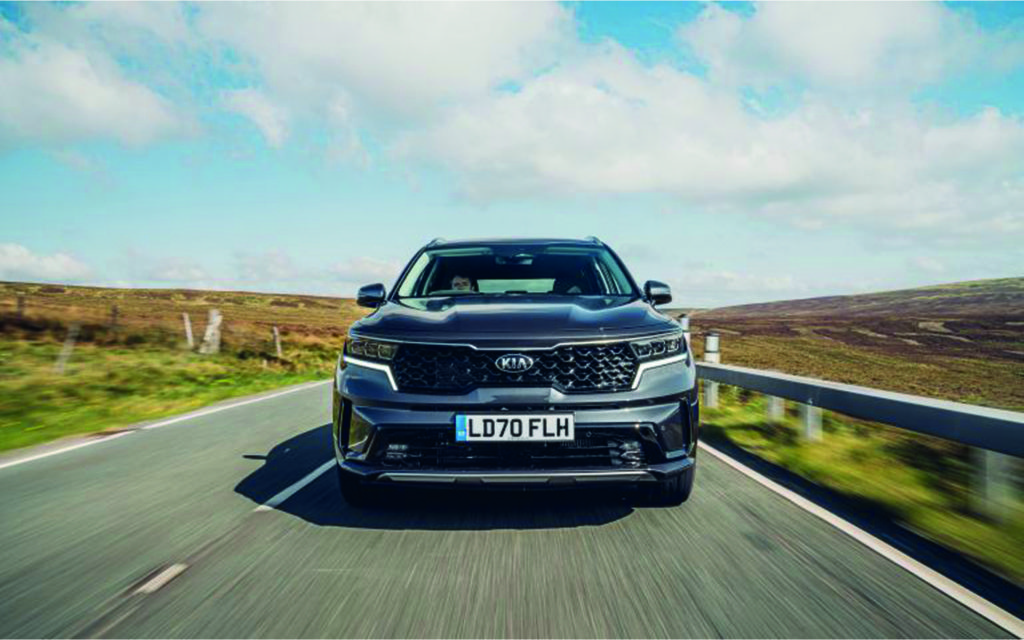 The Sonata’s international introduction in 2019 ushered in Hyundai-Kia’s N3 platform, which it shares with the likes of the Hyundai Santa Fe, Kia Carnival and Hyundai Staria (also featured in this issue). These new underpinnings result in a car 35 mm longer in the wheelbase (2 815 mm) and 10 mm longer (4 810 mm) than the previous model. In this seven-seater model, the new platform affords nearly MPV-rivalling amounts of cabin- and utility space, with Kia claiming a luggage capacity of 616 – 821 ℓ and a huge 2 011 ℓ of utility space.

As with many of its stablemates, the cabin of our launch unit was a fairly sombre affair when it came to colour scheme – piano blacks, charcoal greys for the softer trim sections and a smattering of chrome-effect garnish for certain fascia and door panels – but the cabin’s spaciousness, mood lighting and generous glasshouse means it never feels claustrophobic and the standard of fit and finish is impressive enough to be viewed in the same light as a number of German rivals. 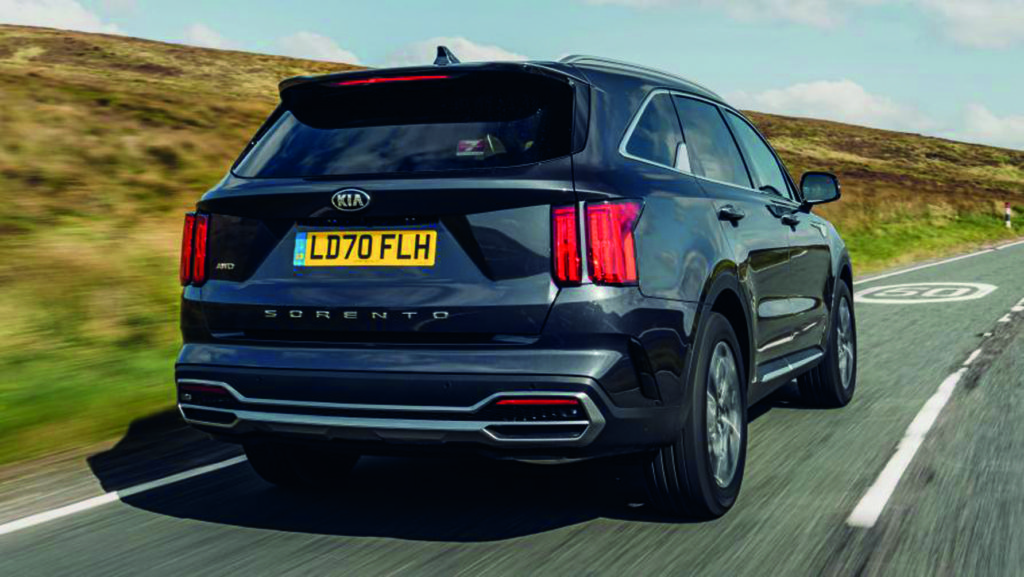 The updated Sorento range is powered by Kia’s new 2.2-litre, four-cylinder Smartstream turbo diesel unit coupled with an 8-speed dual-clutch auto. The new unit is more than 30 kg lighter than the outgoing RII 2.2 engine and features a higher compression ratio and injection pressure. Power has climbed marginally and torque remains unchanged at 440 Nm, for a claimed 0–100 km/h sprint in 9.2 seconds and a 205 km/h top speed. It proved an impressively refined and composed performer on our drive between Gqeberha and Cape Town, with just the merest hint of turbo diesel thrum entering the cabin under hard acceleration. The impression of refinement is bolstered by the near-seamless interplay between engine and dual-clutch box, to the extent that the expected kickdown under full throttle barely announced itself and masked just how much mid-range punch there is on offer. 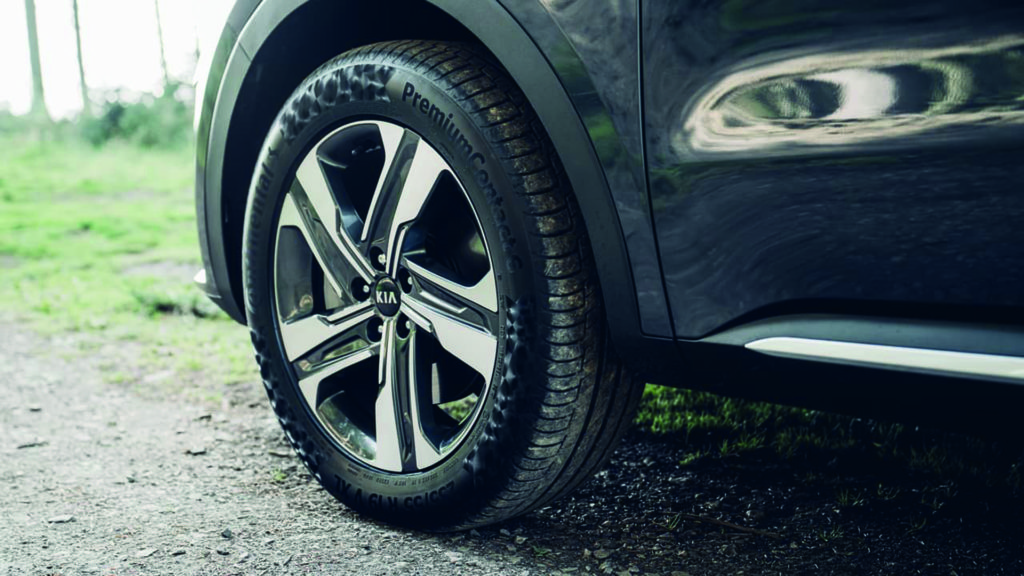 The steering isn’t the last word in responsiveness, but it’s well weighted and relaxingly geared, making the Sorento an effortless long-distance cruiser. The ride quality is impressive, proving composed on all surfaces – our stint on some seriously rutted roads did little to unsettle the Sorento – and body control doesn’t range into any unnerving degree of floaty vagueness. We didn’t have a chance to thoroughly test the Sorento’s off-road ability, but the 185 mm of ground clearance and segment-requisite drivetrain management system with on- and off-road presets (these tailor parameters such as drive apportioning, stability control, throttle and gear mapping) mean the new car should be able to tackle some moderate green-laning without too much hassle. 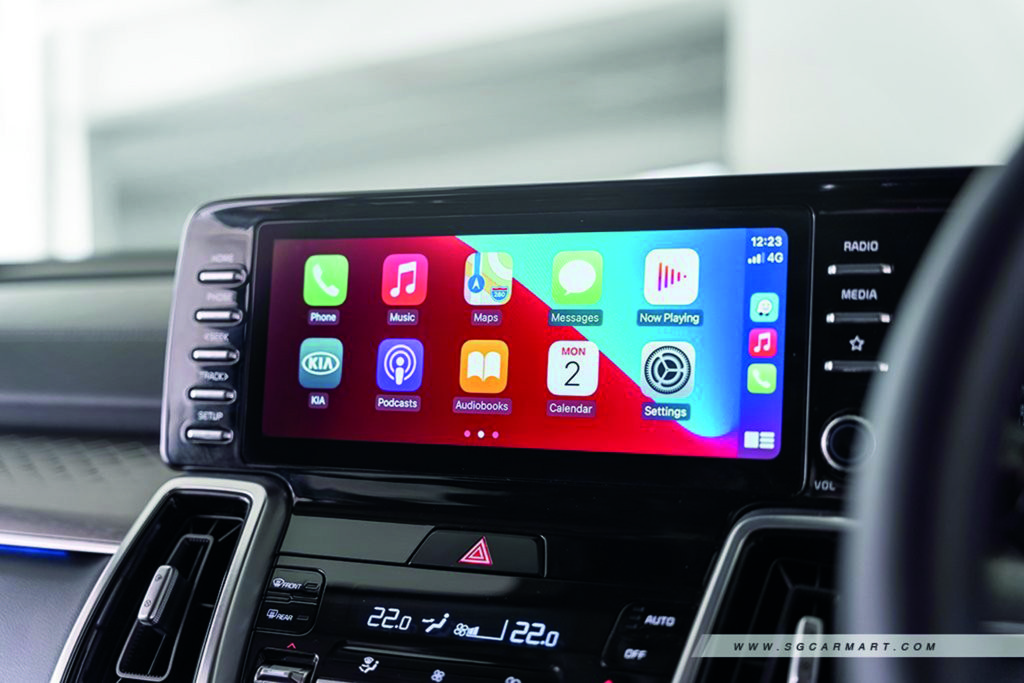 While a Kia just shy of R1 million may sound, um, surprising, it has to be said that the SXL-grade Sorento doesn’t want for much when it comes to standard specification. We won’t go into the full rundown here, but among the highlights are powered/heated/ventilated front seats, a 10.25-inch touchscreen infotainment system with Android and Apple connectivity, power tailgate, keyless entry and ignition, 12-speaker Bose audio system and a panoramic sunroof. The price also includes an impressive six-year/90 000 km maintenance plan and five-year/unlimited km warranty.

The Sorento also offers an impressive array of active safety tech to keep occupants safe and lift some of the burden off the driver on longer trips. In addition to alerts for driver fatigue and rear cross traffic, there’s an array of camera- and radar-assisted safety systems, including front collision mitigation (semi-autonomous braking assistance), lane keeping and following and blind-spot-collision avoidance. The neatest of these safety systems has to be the blind-spot monitor, which projects a video feed to the 12.3-inch TFT digital instrument binnacle when you indicate. 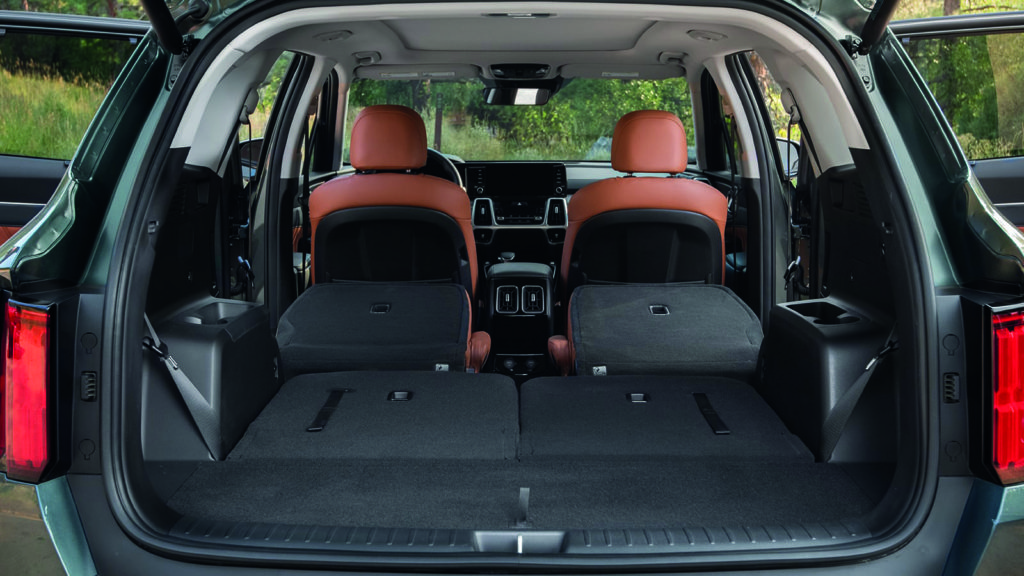 The new Sorento, with its eye-catching design, spacious and beautifully appointed interior and refined road manners only reinforces our love of Kia’s halo SUV. Factor in plentiful standard specification (even the lower-grade EX+ and SX models are generously equipped), the feeling of quality and a solid after-sales support package and even committed Europhiles would do well to consider the Sorento.