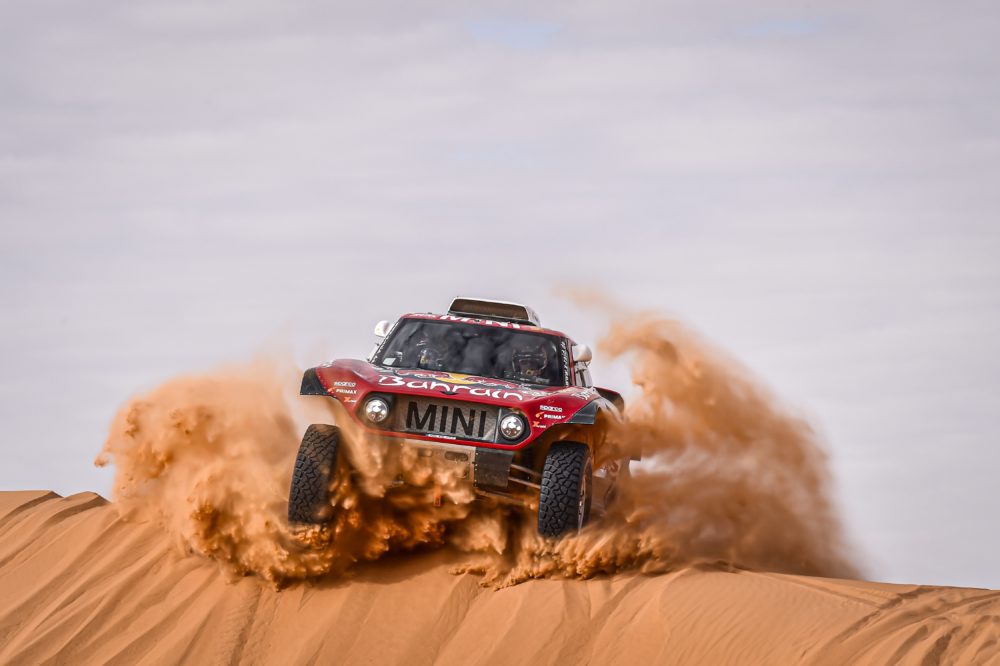 The move to Saudi Arabia was met with varied response, a host of factors merged to create the need to accept Saudi’s offer to stage the Dakar there for the next five races. Chief amongst the driving factors was money, the countries in South America simply don’t have the money required to assist with hosting the Dakar. Climate change was also a factor. The last few Dakars held in South America have been marred by extreme weather forcing stages to be cancelled and gumboots in flooded bivouacs. The extremes forced riders to quit from heat exhaustion and carry clothing for snow as they climbed into the high altitude areas. And then Saudi Arabia entered, offering a home with plenty of extremes, favourable weather conditions, safety and lots and lots of wide-open spaces to go bundu bashing. 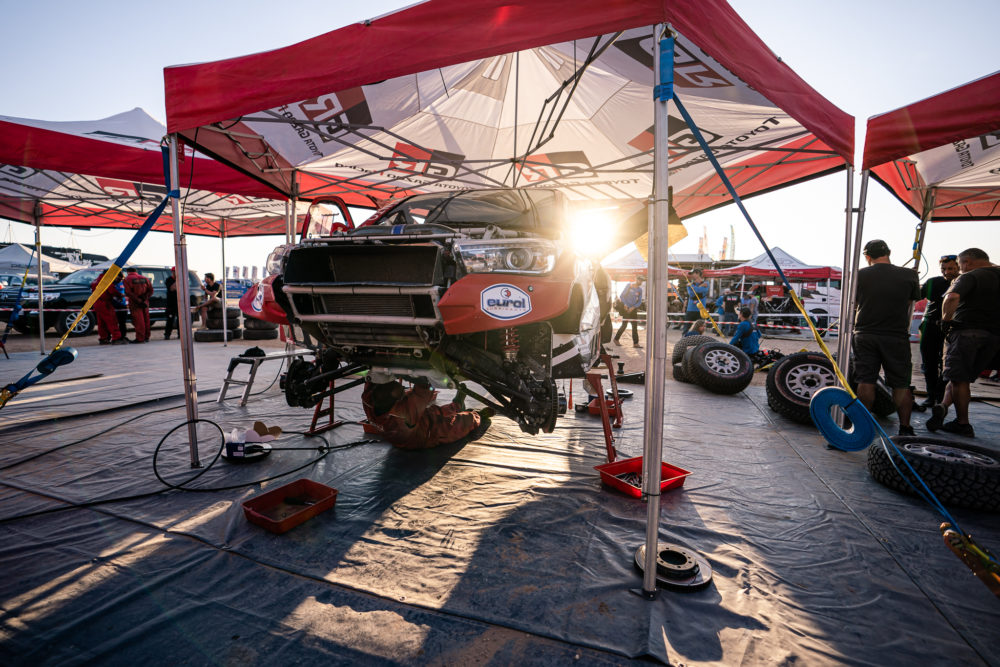 Dakar 2020 traversed 7 900 km in total, of that 5 000 km were special stages and four of them exceeded 450 km in length, which is a gruelling distance off road, it’s the equivalent of driving 900 km on road. The 12-stage event had two even splits in terrain; the first half was dominated by tricky navigation and punctures galore for team Toyota Gazoo Racing, the second half moving into the dunes which saw unmatchable pace from the ‘Mini’ buggy and a spectacular roll down a dune for Alonso. 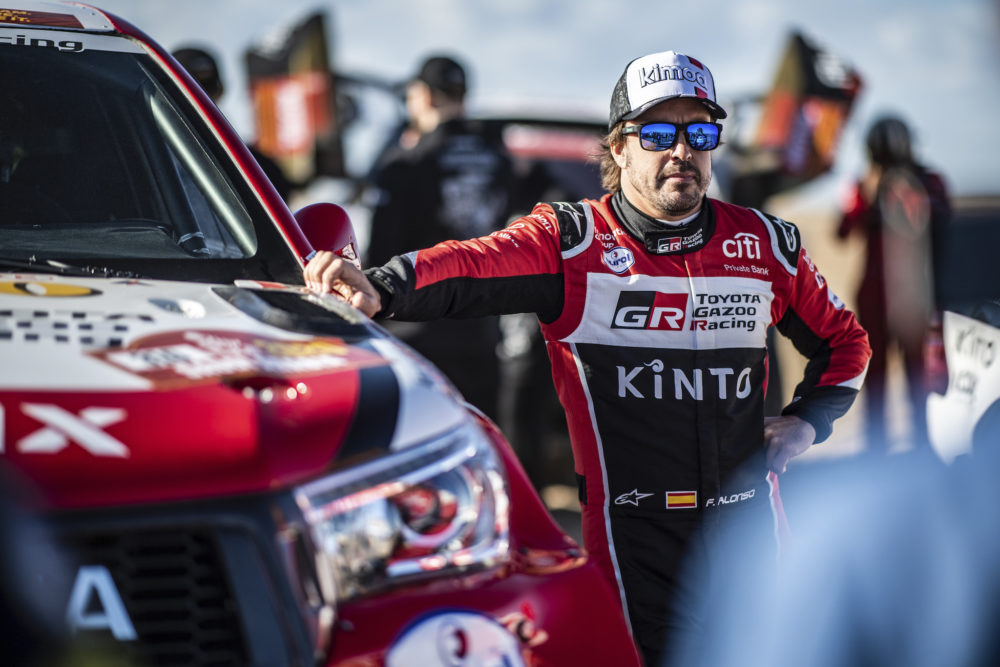 The new location brought numerous changes, as crazy as they may have seemed initially there was plenty of logic around them from the organisers to stay true to the spirit of the Dakar. In recent years the finishing time gap between amateurs and pros has been increasing steadily. The original objective of this rally-raid event was to have amateurs and pros duelling it out on a level playing field. Big teams bring big money, and big support, which drives the wedge of advantage between the two skill sets. The rule changes implemented are to even the playing field, pitting everyone against each other regardless of support and financial backing. And we’re all for it. 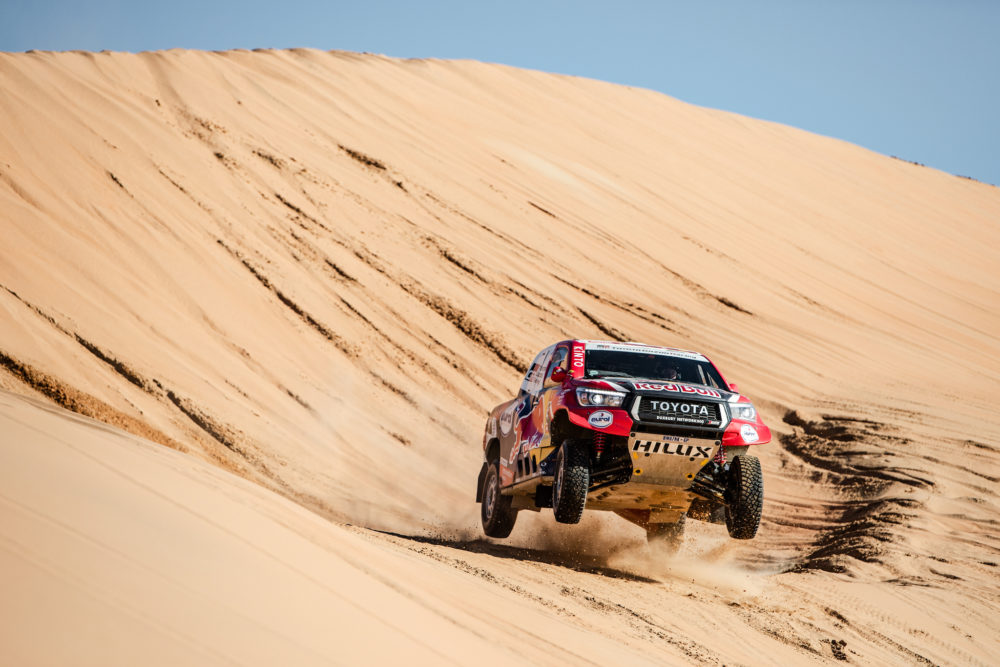 Major rule changes for 2020 included new colour-coded road books being issued minutes before the start of the stage. Issuing of road books ahead of time meant larger teams had more manpower to decipher the navigation, leaving the smaller crews on the back foot, this change balanced out the odds, giving everyone a level playing field. This came to the fore in the final stages where the advantage of being second on the road equalled not making the mistakes of the leader as they figured out the road book on the move. This saw Carlos, Nasser and Stephen playing a game of musical chairs for the top spot as under seven minutes separated them. Nasser’s only error in the final stages was losing their way, and paying the price of not standing at the top of the podium at the end. 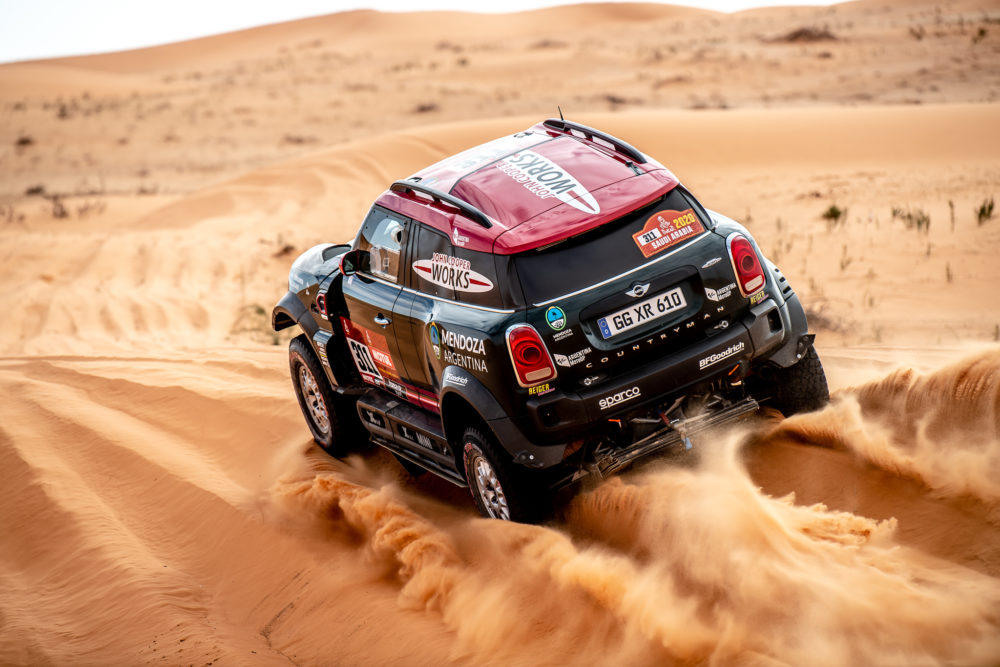 The new super-marathon stage for the bikes only allowed the top-ranked riders ten minutes for work on the bike in the bivouac on these stages, and the regular marathon stage still happening on the penultimate stage before the finish. These changes brought down the deficit between amateurs and pros, evident when Orlando Terranova won the first stage and Botswana national Ross Branch won a stage 2 as a privateer, the changes are working.

A new joker round has been the best idea in the Dakar in many years. Previously if a withdrawal occurred for whatever reason the competitor packed up shop and went home. The joker round is a second chance allowing competitors (except top-ranking teams) who become stranded to be recovered, returned to the bivouac for mechanical assistance and allowed to resume the race under the Dakar Experience class. This returns the Dakar to its original intentions about completing the route and the experience, it also allowed for Dakar Experience competitors to be classified in stage rankings but not overall standings, giving the teams an indication of their performance and to be part of the daily competition. 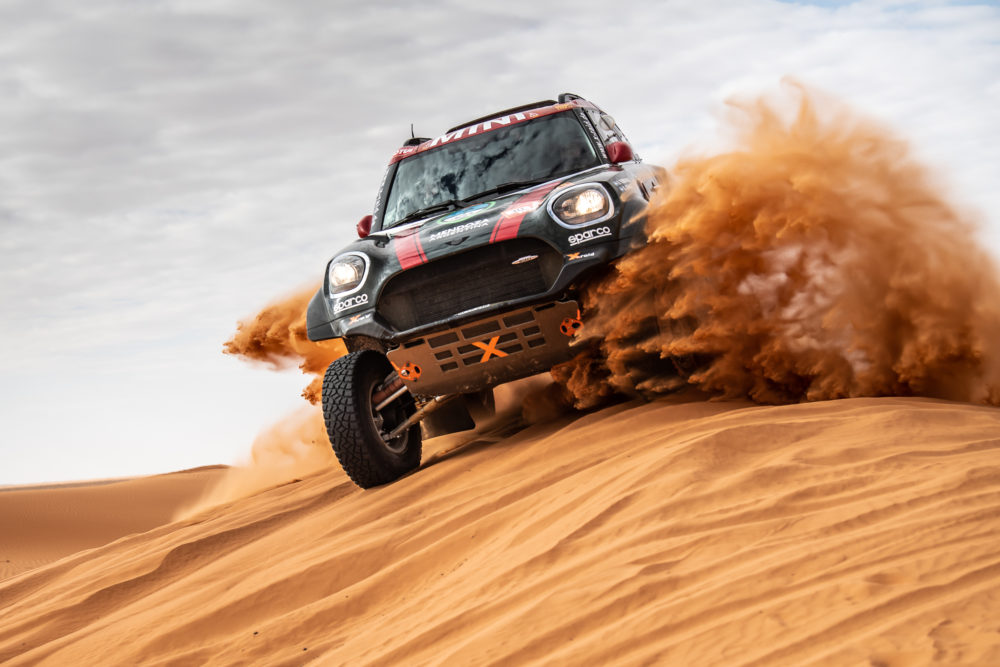 The opening stages brought home some harsh truths about racing in Saudi Arabia, it was tougher than expected. Punctures punctuated the flat-out racing that the top runners we so eagerly looking forward too. Giniel de Villiers in a Toyota Gazoo Racing Hilux picked up four punctures on a stage before gingerly limping the Hilux into camp on three tyres and a rim, costing plenty of time. He seemed entirely unfazed by proceedings, noting that while it wasn’t ideal it was early days. Synonymous throughout the feedback from the competitors was the damage that the camel grass could cause to tyres. A twist in events was the pace of the Minis.

A Mini? Did this writer do their research properly; a Mini can barely get over extra-large speed bumps. Yes, a Mini. And it’s a Mini in branding alone, it’s a Mini in the same way that the current Nissan GT-R could be called a Datsun, there’s been much more than six-degrees of separation between the two. The Minis are actually buggies, and thus perfectly suited to the wheel-destroying camel grass. The raised ride height, insane suspension abilities and the lighter than a feather shell on top meant the ability to go fast and be light, skipping across the kilometres. In the end the superlight buggies worked in the favour of the Saudi Arabian landscape, with Carlos Sainz taking the podium, which was only decided on the final stage, keeping to the true nature of Dakar. Sainz has claimed three victories with three manufacturers – Volkswagen, Peugeot and now ‘Mini’. 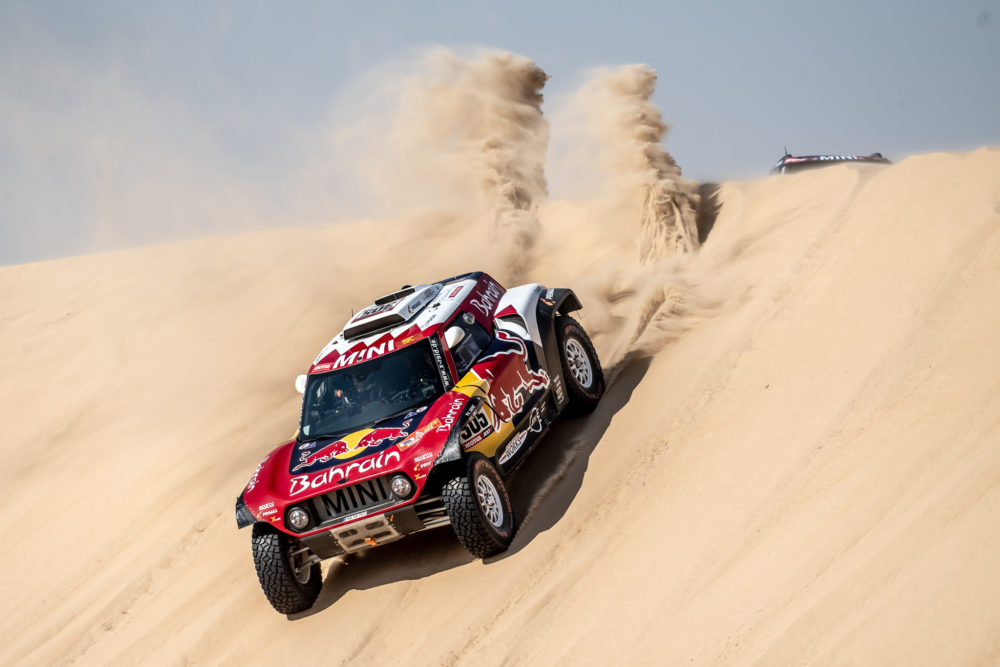 In the bikes category it was a mixed bag of emotions, veteran Dakar competitor Paolo Goncalves succumbed to injuries from a fall which lead to the cancellation for the bike class the next day. The 2019 winner Toby Price WAS the first to find him and abandoned his race to stay by Paolo’s side in the true spirit of sportsmanship. The event organisers credited Toby’s lost time though that wasn’t enough to help him win again. Recovering from surgery he showed serious pace initially even when his road book “walked out on him 15 km into the race”, however in the end he lost out to American Ricky Brabec, winning on a Honda bike, breaking KTM’s 18-year Dakar winning streak.

Botswana national and triple SA bike champ Ross branch was in the running for a solid top ten spot even with a separated shoulder and severed fingertip after a fall before a mechanical malfunction dashed his chances, he managed to claw back time in the following stages and finished a solid 21st place.

Kristen Landman and Taye Perry put in incredible performances, Taye was sitting in third overall for women, behind Dakar veterans Marjam Pol and Laia Sanz, when her KTM suffered a mechanical meltdown on the penultimate day 300 km from the end. Did she quit, hell no, all 1.58-metres of her pushed the bike through the thick sand, help arrived from an Argentinian duo racing a Hilux who towed her into the bivouac at midnight. Her unfortunate mechanical problem put Kristen Landman on the third step of the podium.

Dakar 2020 can’t be written about without mentioning Fernando Alonso in his rookie debut, and a fast rookie he was. The opening stages were tough for him and Dakar bike veteran Marc Coma, plenty of punctures and navigational issues saw them falling down the order. The team didn’t give up and it was refreshing to see seasoned motorsport champion belly down in the sand digging them free or changing a tyre. As they progressed the duo found a steady rhythm and climbed back up the order finishing second on stage 8. The marathon stage saw a spectacular roll down a dune, it didn’t deter him, he simply snapped his goggles on, kicked out the damaged windscreen, removed the destroyed headlights and went on his merry way. The marathon stage meant no mechanics were allowed to assist in the bivouac so Alonso and Marc went about fixing their Hilux with cable ties and duct tape. 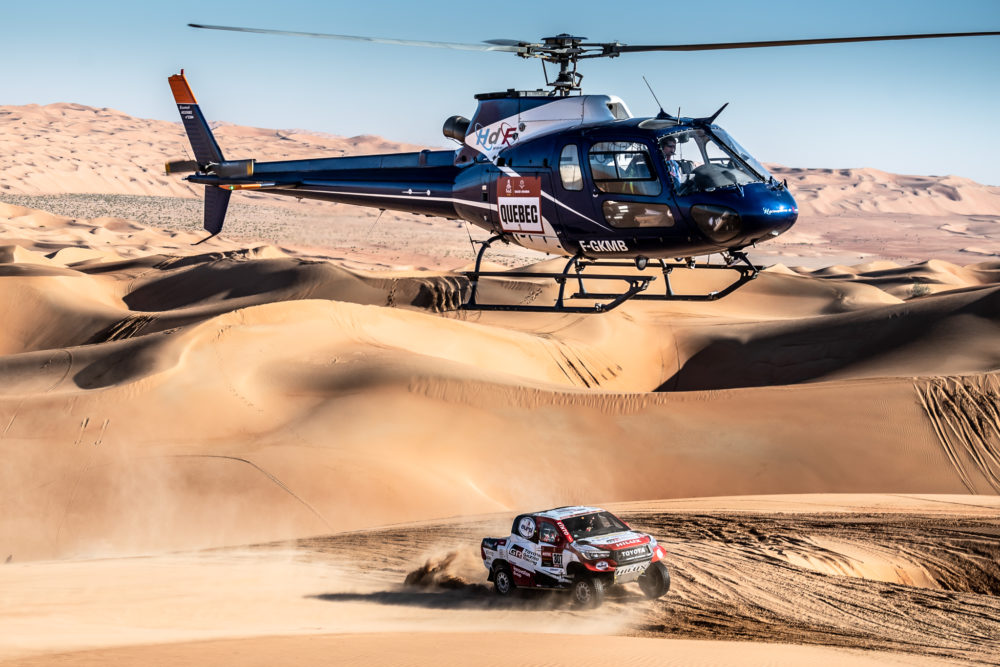