In the pursuit of the building the ultimate speed machine, the folks at SSC in Philadelphia Pennsylvania started planning their powerful creation way back in 2009. This project was meant began by the brands founder and CEO Jerod Shelby who was keen on developing a successor to the SSC Ultimate Aero which held the Guinness World Record for the coveted fastest production car in the world from 2007 to 2010. After much blood, sweat and tears the first of only 100 of the Tuatara hypercars to be built has been debuted with a similar recipe to that of the Ultimate Aero with massive power and an emphasis on aerodynamics. The Tuatara has a class-leading 0.279 drag coefficient and is claimed to keep the identical aero balance between 160 km/h to 482 km/h and beyond. The SSC Tuatara makes extensive use of carbon fibre, the body and chassis is all made from the lightweight material for unprecedented durability and performance. Powered by 5.9-litre a twin-turbo flat-plane crank V8 this power plant will certainly dominate the driving experience. The motor is mated to an automated manual transmission (AMT) offering shift times as brisk as sub-100 milliseconds in the all-out track mode. Let’s see whether the Tuatara can live up to the expectation of becoming the fastest production car in the world.

Isuzu has expanded its local range of D-Max bakkies (previously known as the KB) with five new automatic models. This is a timely addition as the bakkie game has been evolving over the past few years. Double-cab bakkie buyers specifically have been gradually migrating towards automatic variants as traffic in and around cities becomes more of a nightmare. The Isuzu D-Max X-Rider is unique in the current bakkie landscape as it offers a lower specification engine producing 100 kW and 320 Nm and carefully selected interior equipment levels while offering flagship exterior looks. It’s on-road presence is thanks to LED daytime running lights, 18-inch diamond-cut alloy wheels, side steps and a sports bar finished in black with the X-Rider logo. Safety technology is taken into account too with the fitment of a collapsable steering column, electronic stability control with traction control, hill start assists, hill descent control and ABS with electronic brakeforce distribution. The result is a bold looking good value for money double-cab that now has should now appeal to an even larger audience thanks to an automatic transmission. Isuzu has been proven to be one of the better brands when it comes to the aftersales experience and vehicle reliability so a five-year/120 000 km bumper-to-bumper warranty only sweetens what looks to be a good deal. 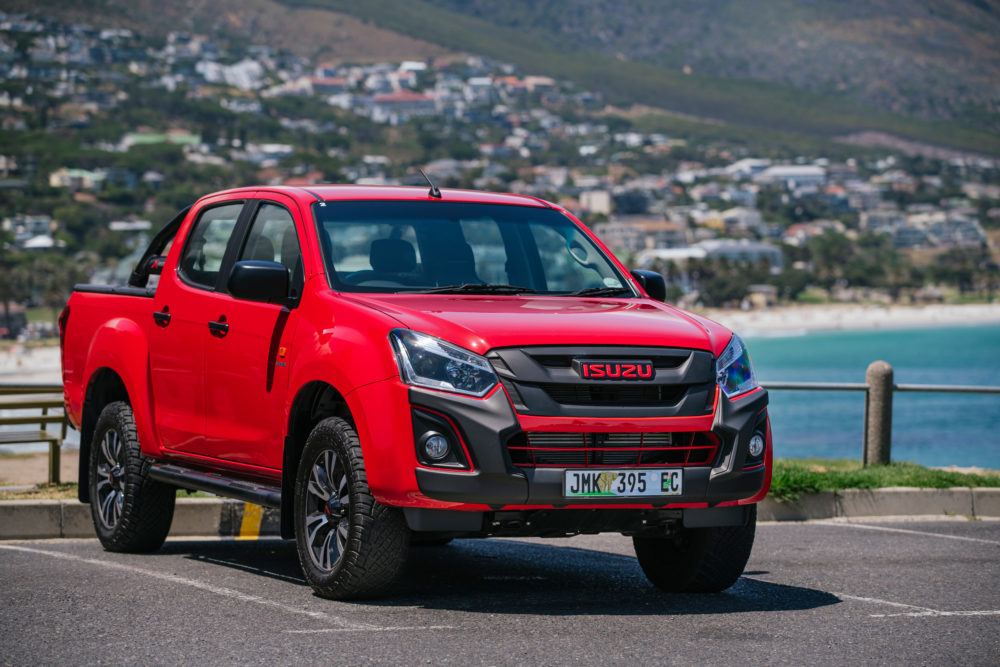 Taking the fight to the BMW M2 Competition and Audi TT RS, Porsche has gone and crammed a 4.0-litre six-cylinder boxer engine into both the 718 Cayman and Boxter creating the GTS 4.0 to silence the negative comments received about the 2.5-litre four-cylinder in the outgoing model. This new motor is the same used in the 718 Spyder and Cayman GT4 and is available mated to a six-speed manual gearbox revving to 7 800 rpm. The new GTS follows the same recipe as before where choice options on lesser models are fitted as standard. For example the ride height is 20 mm lower than a regular Cayman thanks to Porsche active suspension management. Ensuring that the GTS is as precise a driving tool as expected it comes fitted with torque vectoring and a mechanical limited-slip rear differential. The sport chrono package and a sports exhaust as well as 20-inch alloy wheels ship as standard too. 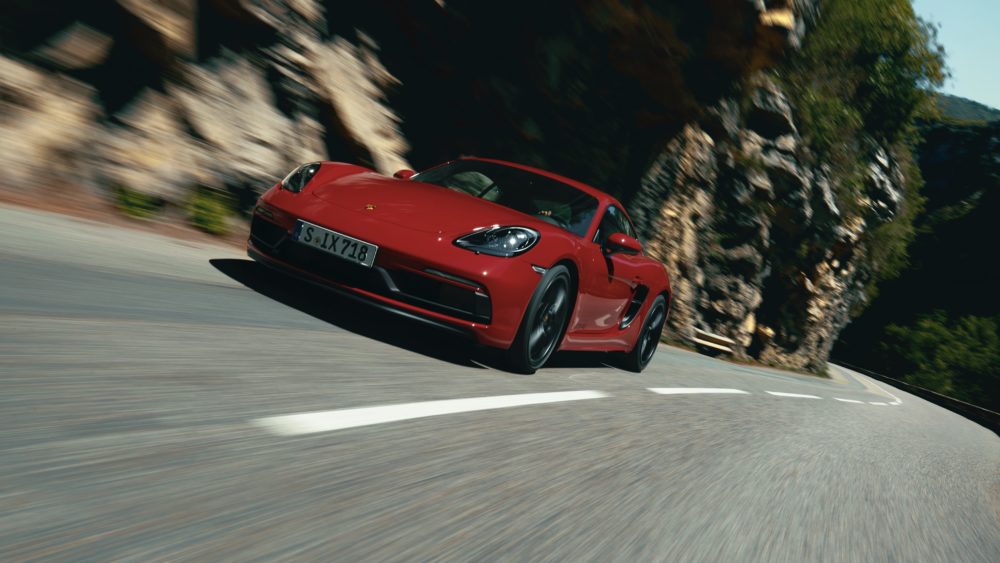 This facelifted Citroën C3 previews a subtle yet new design direction for Citroën. We can expect its current model line-up to receive similar aesthetic updates in the near future. The new face is said to have been inspired by the Citroën concept cars of late and as a result comes of a bit more mature than before. The refreshed design adds some extra joie de vivre to the already funky supermini with LED headlamps, an updated Airbump design signature, new alloy wheel styles and the potential of 97 exterior colour combinations perfect for individuals who want to stand out. Having been made available to the South African market in late 2019 with the relaunch of the French brand into Mzansi, its only fitting that this update has come along as this third generation of the Citroën C3 has been around globally since 2016 and sold an impressive 750 000 units. 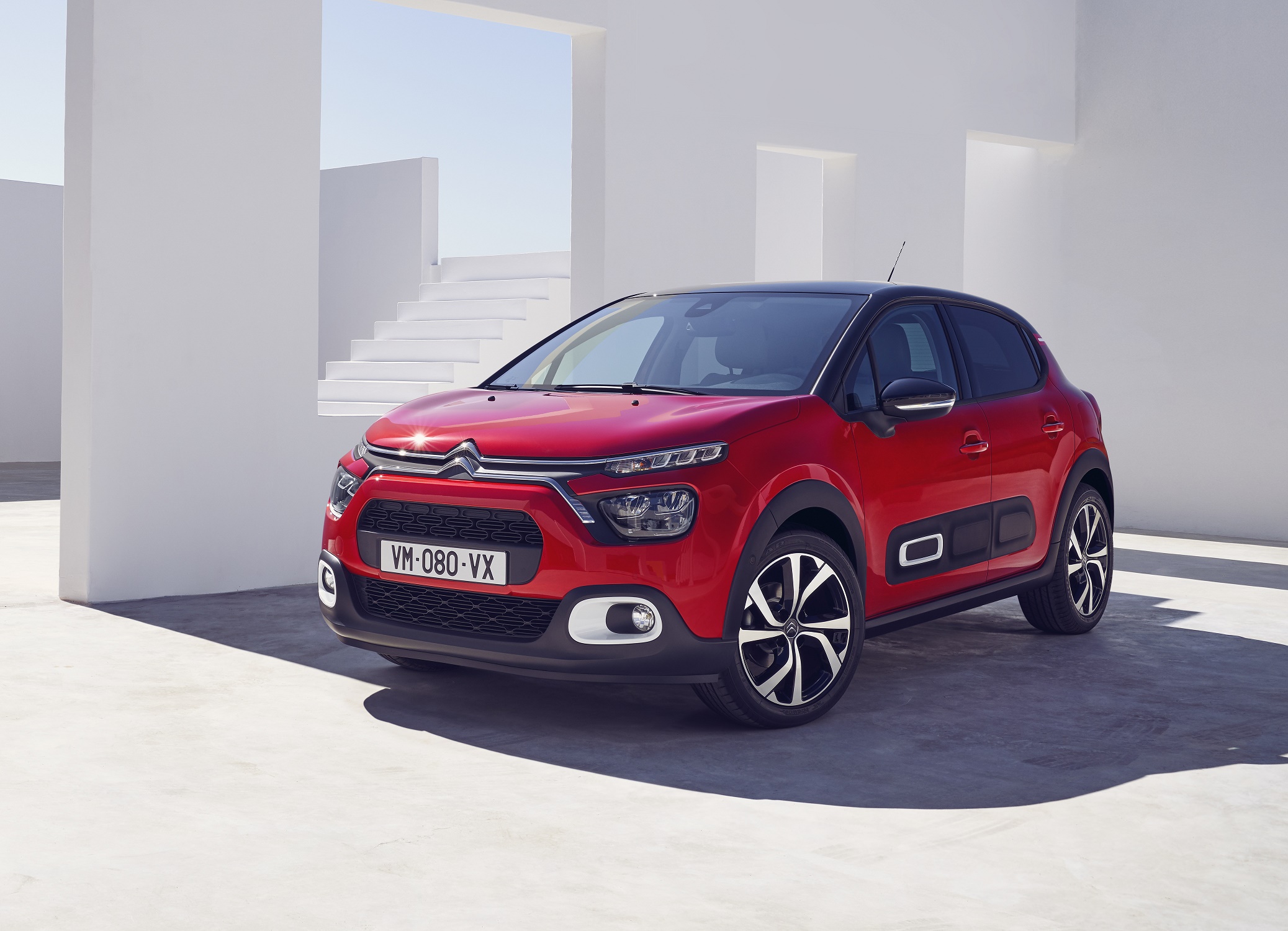 The new generation Smart including the fortwo coupé, cabriolet and forfour models have all gone electric with the well-known design and concept largely unchanged. The urban run about has EQ affixed to the name falling in with the Mercedes-Benz EQ brand of electric vehicles. So then it’s not only the car that’s being refreshed but the Smart brand has gone under a renovation too into a now all-electric brand. The vehicle has a freshly designed exterior with a new radiator grille, pronounced wheel arches and optional LED headlamps, whereas the interior offers more storage and a redesigned infotainment system with smartphone integration. The Smart EQ is available with an optional 22 kW on-board charger with a rapid-charging function needing about 40 minutes to charge from 10% to 80% depending on the conditions. 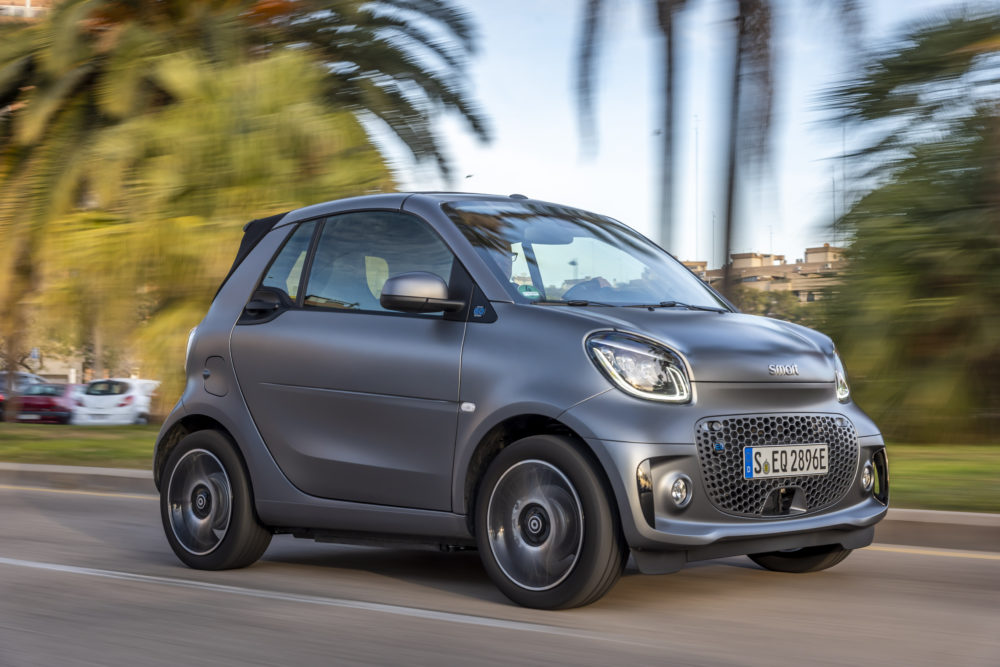 The combination of diesel torque and mild hybrid technology is an appealing proposition for those of us who care about both usable performance and economy. BMW has unveiled this new straight-six turbodiesel variant into the X5 and X6 stable. The familiar 3.0-litre turbodiesel motor is in this guise accompanied by a 48-volt starter generator to optimise power delivery and efficiency. All considered the motor produces a generous 250 kW and 700 Nm. The latter is available from as low as 1 750 rpm. The X5 xDrive 40d in particular is claimed to sip between 6.4 and 5.9 l/100 km while emitting between 164-153 g/km of Carbon dioxide into the atmosphere. Not bad for a vehicle of this size, ey? We should be seeing more of these mild hybridised vehicles in the near future should the claimed figures translate positively to the real world. 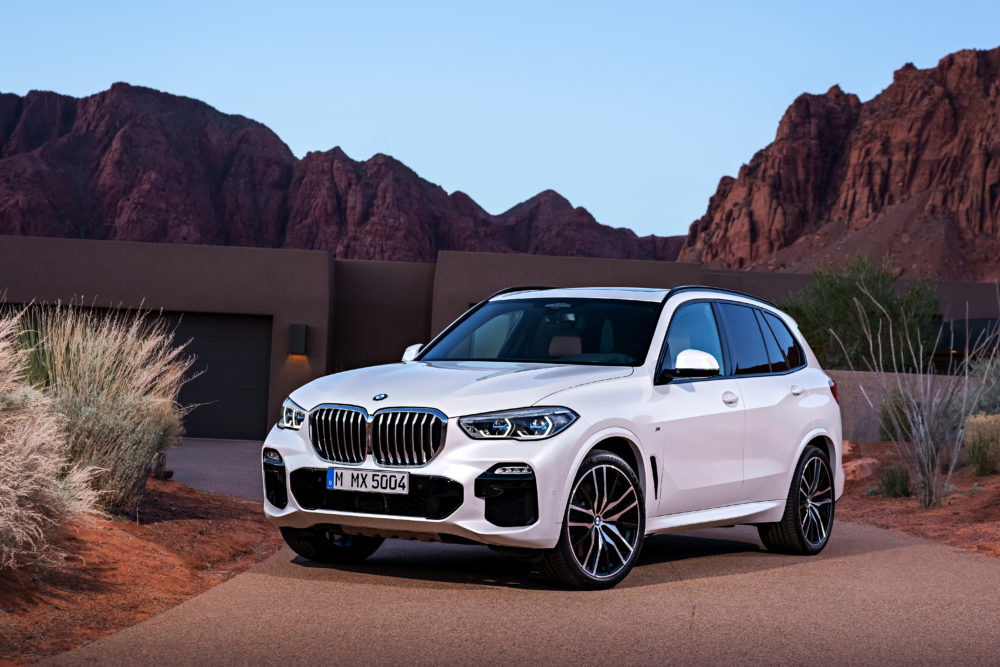 The core of the Aston Martin sports car range has just expanded with the introduction of this the new Vantage Roadster. The brand has endeavoured for the past decade to offer a more characterful, luxurious and quintessentially British alternative to the benchmark sports car the Porsche 911. The Vantage Coupé is one good looking car, arguably the best in the business and here with the roof lopped off and the Roadster hasn’t lost any of the desirable proportions that make the donor car so appealing. As the handsome looks have remained for the Roadster the commitment to everyday usability and an unadulterated driving thrills has remained too. The sonorous AMG derived twin-turbo 4.0-litre V8 powerplant remains unchanged producing a meaty 375 kW and 685 Nm to the rear wheels via an eight-speed ZF automatic transmission. There is a weight penalty of 60 kg for the added chassis bracing as well as the electrical components needed for the folding roof. Being very British of course Aston Martin publish its performance figures using the Imperial system and as a result 0-96 km/h (60 mph) is clocked in at a respectable 3.7 seconds only 0.2 seconds slower than the hard-top Vantage Coupé. It’ll run on to a top speed of 305 km/h with the roof up. The Roadster’s roof is its party piece and will fold away in 6.7 seconds and raise in 6.8 seconds up to a reasonable 50 km/h. 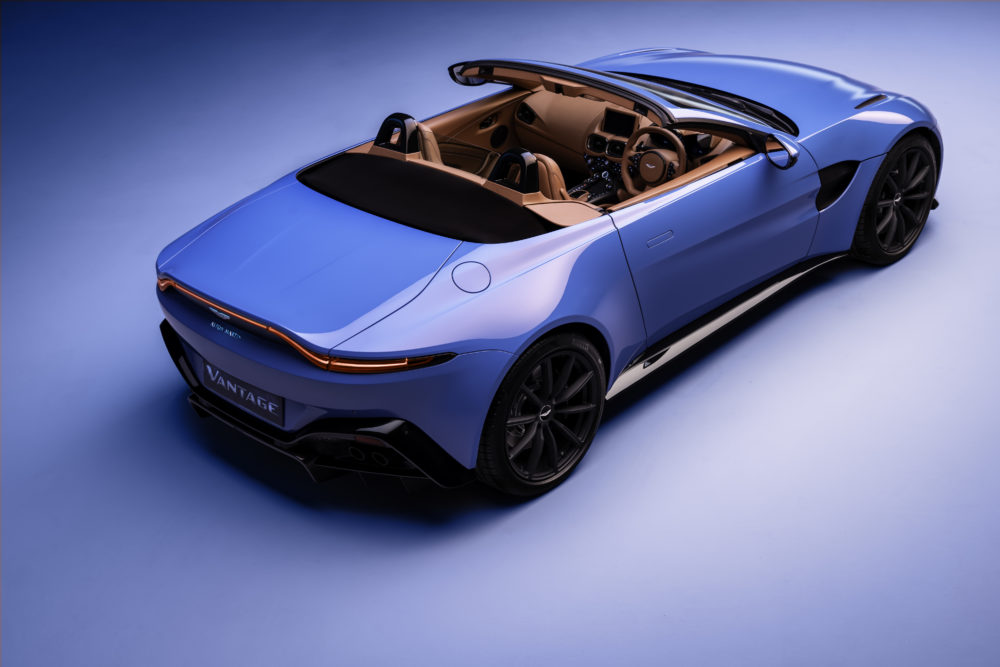 sub-7 sec – The fastest automatic convertible roof on any car