My tummy is grumbling and my feet are throbbing. I want Currywurst from the Volkswagen stand but it feels like I’m a thousand postcodes away looking at big-grille BMWs. They have lovely salmon on the BMW stand, sure, but it’s not the same as Wolfsburg sausage. You see, for all their famed efficiency, the big three German manufacturers don’t like to encroach on each other’s turf. So, their latest and greatest automotive exploits – excuse me, ‘mobility solutions’ – are positioned at opposite sides of the IAA exhibition halls, which translates into a roughly twenty minute walk each way. Each way! Plenty of time to come over all pensive then, considering the dilemma of cars, petrol versus electric, slowing economic growth, the future of motor shows, the environment. 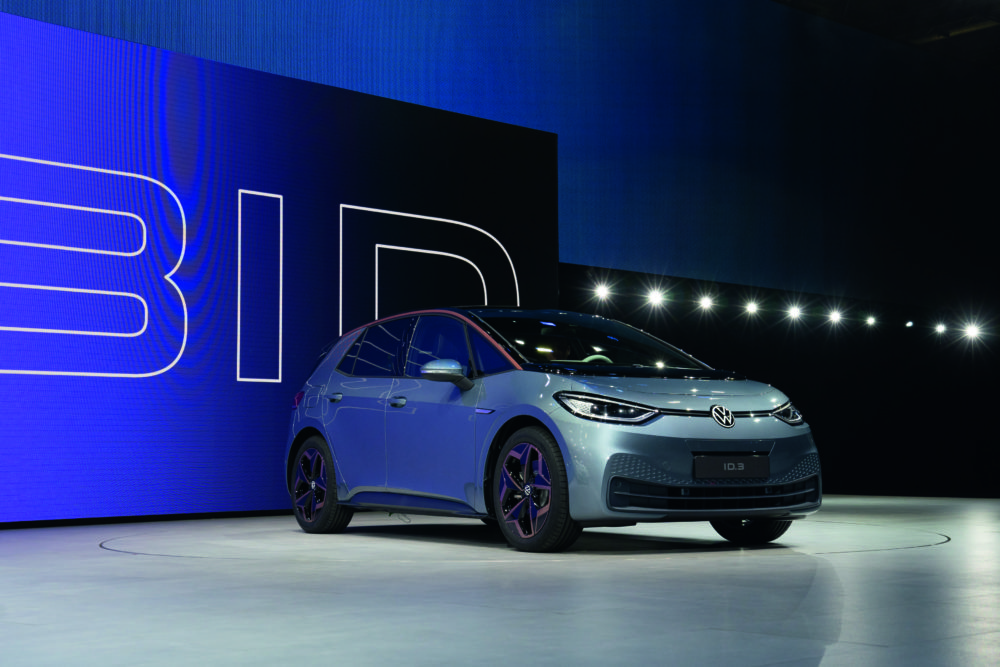 The story circulating the show as we arrive is that this might very well be the last Frankfurt motor show ever, what with manufacturer reorientation from glitz, glamour and shifting metal to sustainability and green solutions – making the motor show harder to define and ostensibly turning the whole exercise into a mobility forum rather than a trade show. If that is indeed the case and IAA 2019 is the last of its kind, that’ll be a crying shame, because it has been around since 1897. That’s a 122-year tenure of support for the German motor industry.

However, as ever, that’s the pessimistic view to take. The other is that the motor industry is evolving at breakneck speed. So quickly in fact that even the mightiest mainstream manufacturers run the risk of pulling a Nokia and being left behind if they don’t get their affairs in order. Dr Wolfgang Porsche summarised it well by saying, ‘The automotive world will change more over the next ten years than it has during the course of the last 100 years’. Right, let’s get to it…

Volkswagen revealed the long-awaited ID 3, an all-electric hatchback set to revolutionise motoring and save the world as we know it. Revealed to us at the exclusive Volkswagen Group night ahead of the motor show opening, Volkswagen’s first EV is a family-sized hatchback, much like the Golf, but with interior practicality of a Passat (ID stands for ‘Intelligent Design’ and 3 for the third chapter, by the way.) Its launch brought about a new, back-to-basics VW logo, too. Three versions will be made available, with 330 km, 440 km and 550 km range respectively. There’s a plan to introduce 1000 units to South Africa in due course. 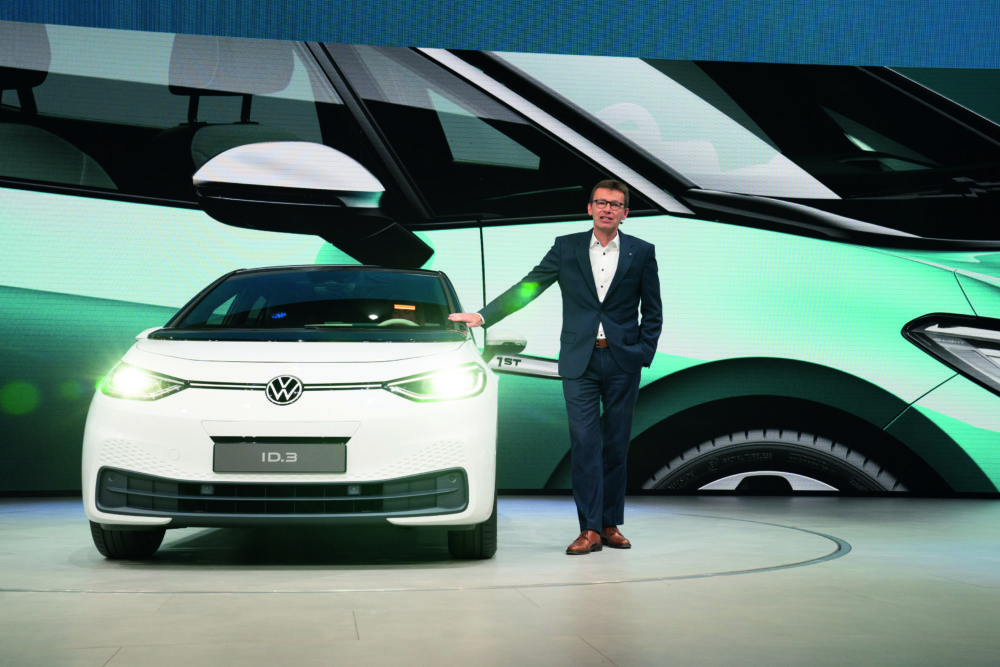 Keeping things in the realm of electrics, Stuttgart’s worst-kept secret – the Porsche Taycan – is finally among us. Following on from the Porsche Mission E concept of 2014, it looks virtually unchanged from the original concept car: whitewall wheels, coke-bottle silhouette, quad-LED DLRs, single-strip rear LED taillights and all. It’ll be quite a bit more expensive than the little Volkswagen ID 3, but that’s all part of the plan for the VW Group. VW does people’s cars, Audi does premium SUVs, and the Porsche does performance, jaaa… 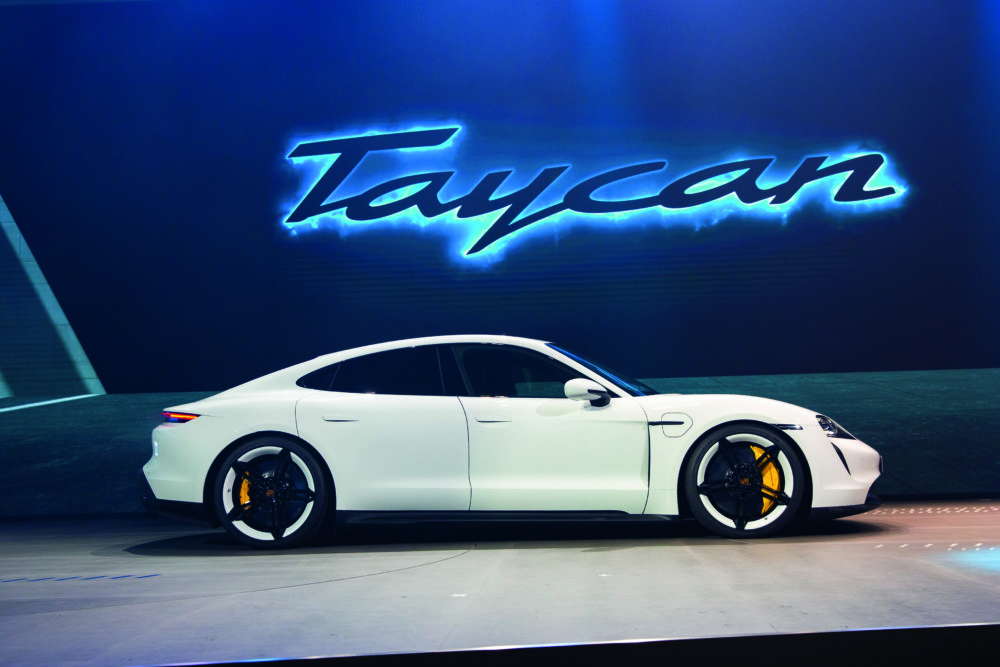 It’s time to dust off the old pith helmet and celebrate the arrival of the new, 21st century Land Rover Defender – arguably the star of the Frankfurt show, which is no mean feat considering it’s propelled by regular internal combustion. It’s been a long time coming, since 2015, and the news that Land Rover’s parent company, Tata, would birth the first all-new version of the quintessentially British off-roader in nearly 70 years was welcome news. Though diehard Defender fans were always going to be critical of the styling and the fact that it’s gone more upmarket and hi-tech than they were expecting, we think it looks the part, and can’t wait to have a go. 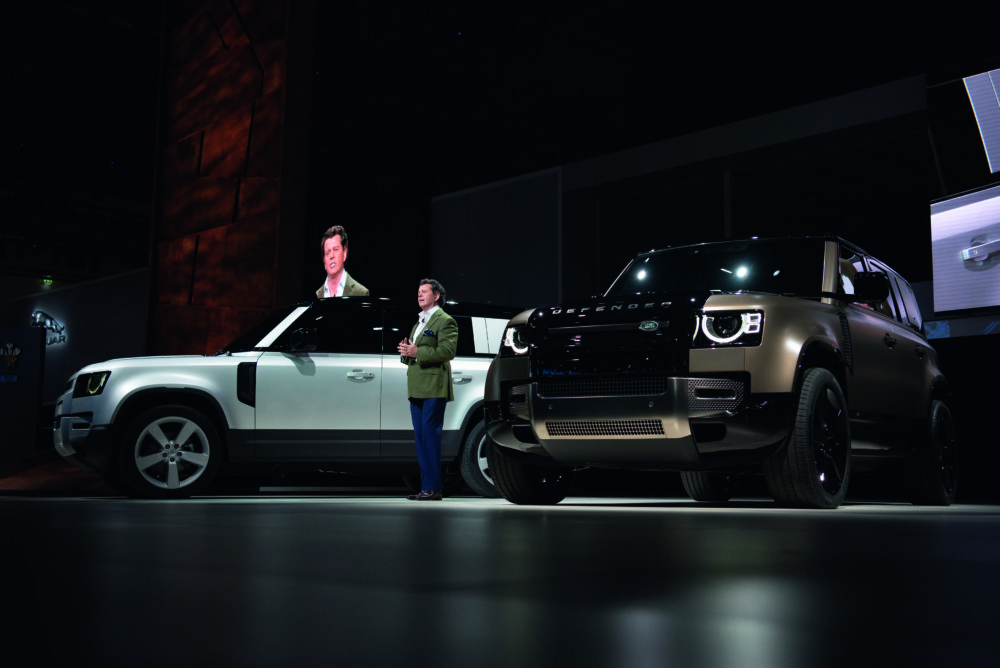 BMW outwitted the competition at Frankfurt by releasing a smörgåsbord of products without jumping wholeheartedly onto the electrification bandwagon. Two standouts for us were the M8 Competition and Concept 4. The former needs no introduction, a four-seater sports car with a big boot that’ll harass supercars. The up-tuned 4.4-litre V8 engine represents all the firepower BMW M currently has to offer, teamed with M-specific xDrive four-wheel drive it is a masterpiece of modern high-performance engineering. The latter, the Concept 4, was the curveball of the show – the unlikely Yorker that had everyone talking up and down the IAA 2019 pitch. Not many technical details were to be had and that’s perfectly ok, because the show car is all about its proportions, the future ideal of the next 4 Series. BMW calls it, ‘the modern essence of a coupe, oozing aesthetic appeal from every pore.’ That’s true from every angle except the front. 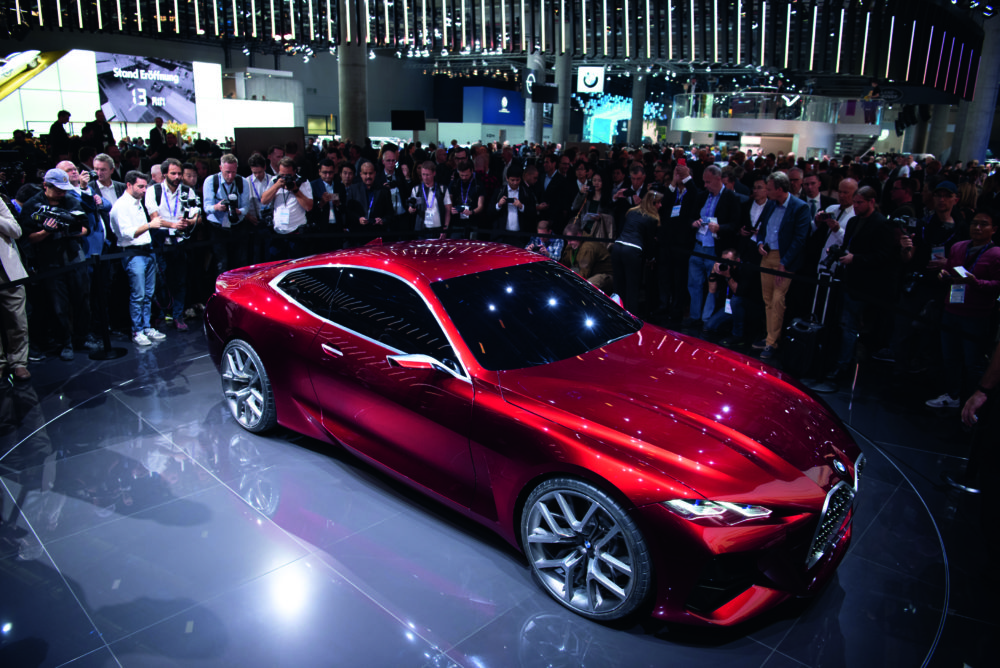 Honda’s electric car, aptly titled the e, was in fact shown at the Geneva motor show earlier in the year, but we couldn’t wait to clap eyes on it for ourselves in Frankfurt. The electric vehicle is very coo-chi-coo in the metal – a sort of retro-futuristic Japanese electric Mini, if you will, paying homage to cars from a simpler era in the ’60s, ’70s with circular headlights and the like. Will it ever reach South African shores? Don’t hold your breath. 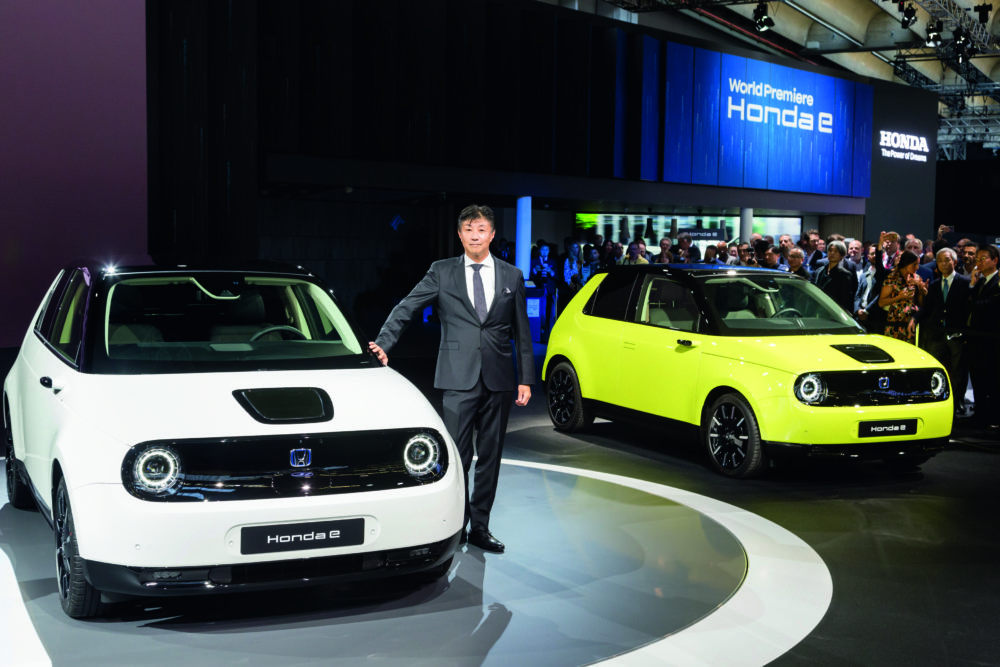 The brand new Lamborghini Sián is testament to the ‘never-say-never’ rule in motoring. Former Lambo boss, Stephan Winkelmann’s bullish stance toward hybrids and electrification couldn’t last forever, and so with the arrival of Stefano Domenicali, former team principal of the Ferrari F1 team incidentally, the firm’s first hybrid hypercar was born. Voila! Granted, its supercapacitor system qualifies as the bare minimum to make it a hybrid, assisting at parking speeds and little more. But hey, it’s progress, nonetheless. And it still looks like a mental Lambo, which is all that really matters. 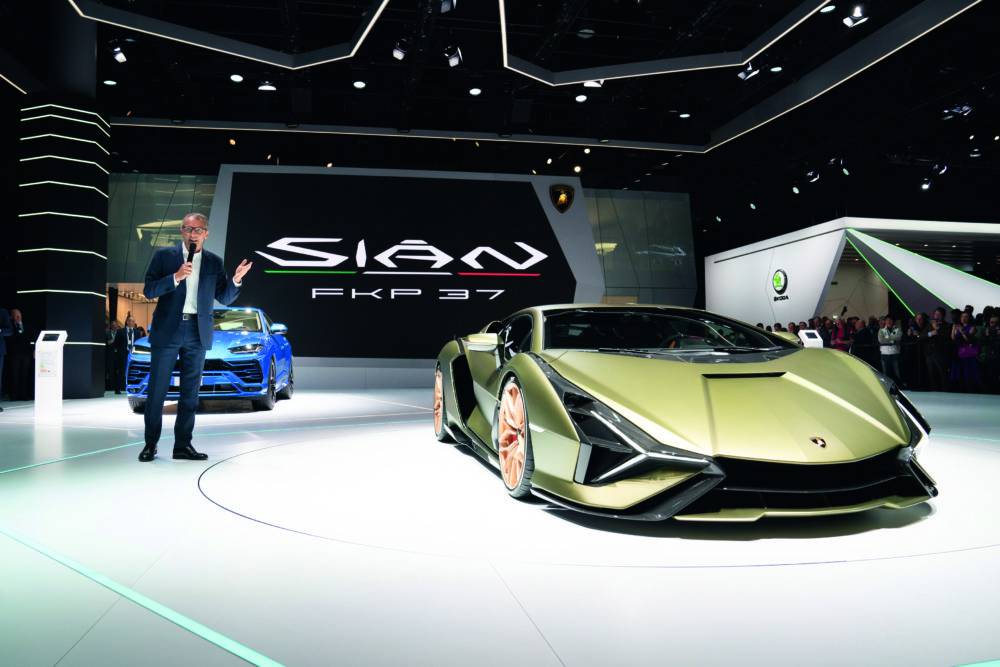 This being the headline European motor show of 2019, the buzz word, of course, is ‘electrification’. To show Hyundai has its finger on the EV pulse, too, it showed off a new electric concept car, named simply 45. Taking the shape of a compact family hatchback, sporting a rear-end full of animated LEDs, designers used Hyundai’s first model from the 1970s, the Pony, for styling inspiration. Right next to it on the stand, however, was something a little more relatable – the limited-edition Project C version of the Hyundai i30 N. The Project C takes its name from the Korean firm’s high-performance testing facility back home – spicily called ‘development area C.’ And it’s a great precursor to the arrival of the i30 N in South Africa early in 2020. Hyundai’s South African distributor has finally seen a business case to bring in the high-performance N in limited numbers. With 202 kW on tap, a six-speed manual gearbox and electronic limited-slip differential you can bet your bottom dollar the Nth degree will be giving VW Golf GTIs sleepless nights. 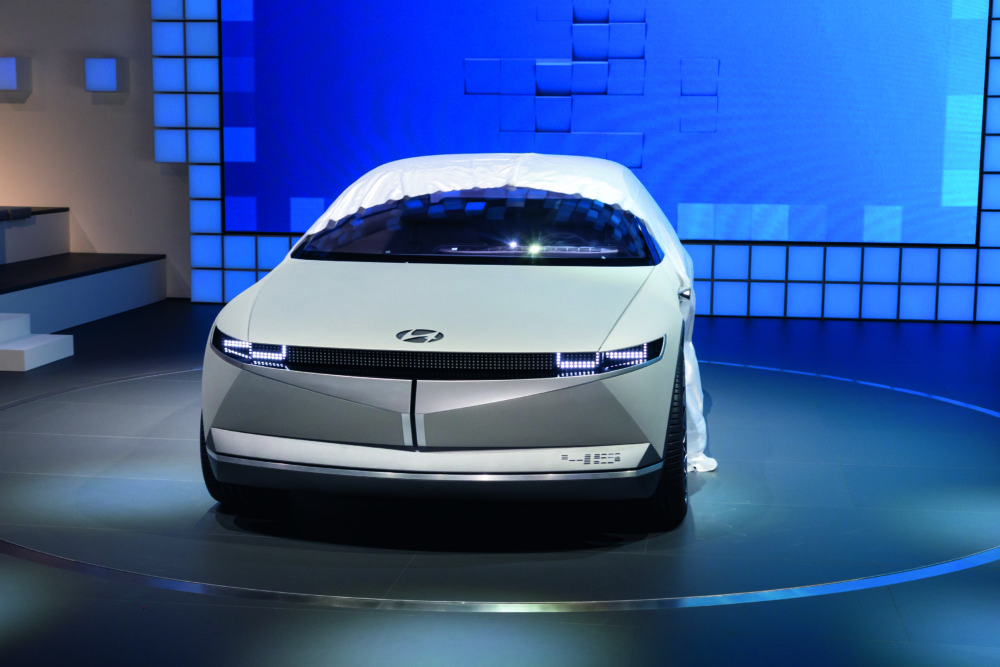