I remember it vividly. Sitting at a red light on Sunset Blvd, West Hollywood, back in 2014. I was in a new Mustang when a ’68 GT Fastback (just like the Bullitt one) pulled up alongside with its window down. ‘Is this the new model?’ enquired the square-jawed Fastback driver with a Western drawl. Before I could answer him with more than a well-meant thumbs up, he popped the clutch, turned right and barrelled up a side street in a cacophony of old-school V8 thump and tyre squeal. Hairs on the back of my neck straight on end! This was the day I found two reasons to love America. It’s legal to turn right on red and the Ford Mustang. 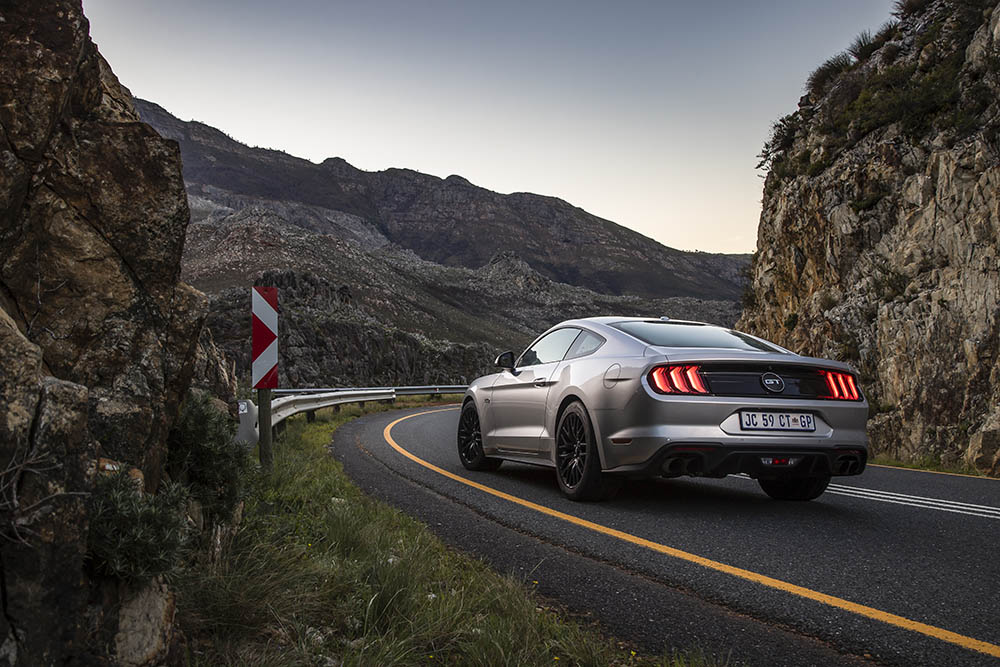 America is another world when it comes to the infamous pony car. Truth be told, they’re a dime-a-dozen over there, with more than 10 million sold since 1964 they’re a fixture on every street corner. No wonder it’s been likened to the ‘affordable sports car for the masses’ by some, and less flatteringly, ‘America’s Corolla,’ by others.  Nevertheless, even into its (second) new generation their rarity is still a thing in South Africa. When you clap eyes on the new one you can’t ignore what a great-looking piece of machinery it is. In America’s big-is-best context its proportions are right on, and the sleek fastback roofline wins the day every day. Depending on the model, each gets a unique grille tailored to its specific powerplant: Active shutters for the four-cylinder EcoBoost, honeycomb detailing with chromed pony emblem in the GT, and a blacked-out shark-bite grille completely debadged for the Bullitt. 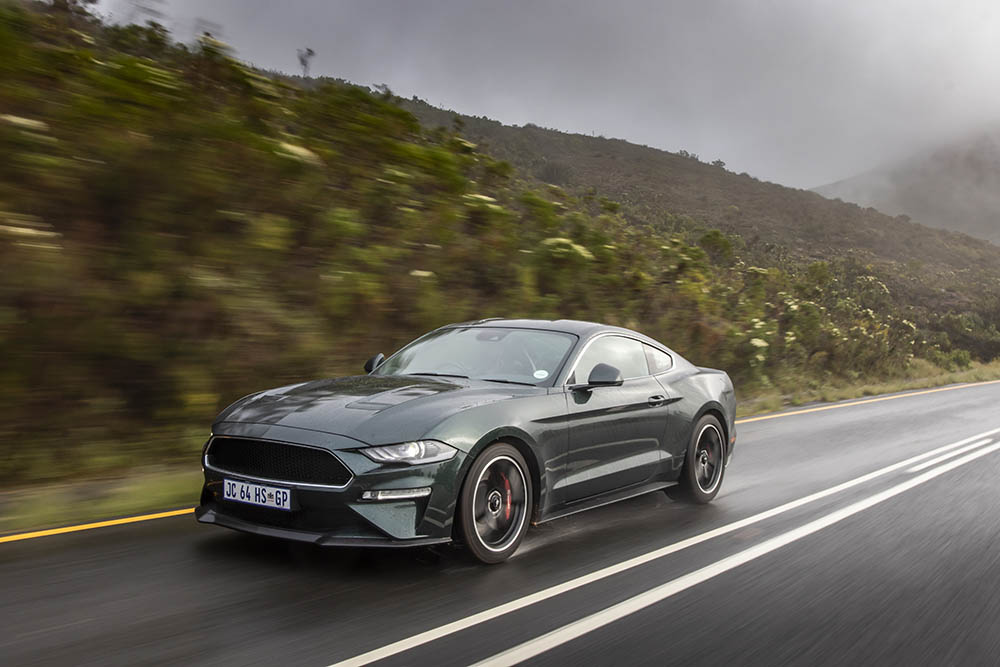 The triple rear taillights are a favourite of ours. Interestingly, in the US, all the lights illuminate when indicating, but it’s legislated on European cars (and ours) that the lenses only flash the outer light when indicating. A subtle difference but a fact you can impress your friends with down at the pub. Pony puddle lights that illuminate the ground from the wing mirrors are a nice touch, too.

The route (or rowt in Americanese) is a relaxed one that takes us out the city, stretching the ponies’ legs as we head to the wonderful Franschhoek Pass. Even Cape Town traffic appears to be in favour of our American convoy because with minimal fuss we’re free of gridlock, heading towards the mountains. I’m in the new 10-speed automatic GT and I’m reveling in the 331 kW (up from 324 kW) of the five point oh when I punch it (more Americanese for yah there). The upgraded V8 Coyote motor benefits from both port- and direct-injection systems, but it’s the new 10-speed gearbox that’s an unexpected boon. The closely ratioed gearbox makes performance so accessible, so infectious. It jumps down several cogs seamlessly when you floor it so you never feel far away from the 529 Nm of peak twist. Giddy up! 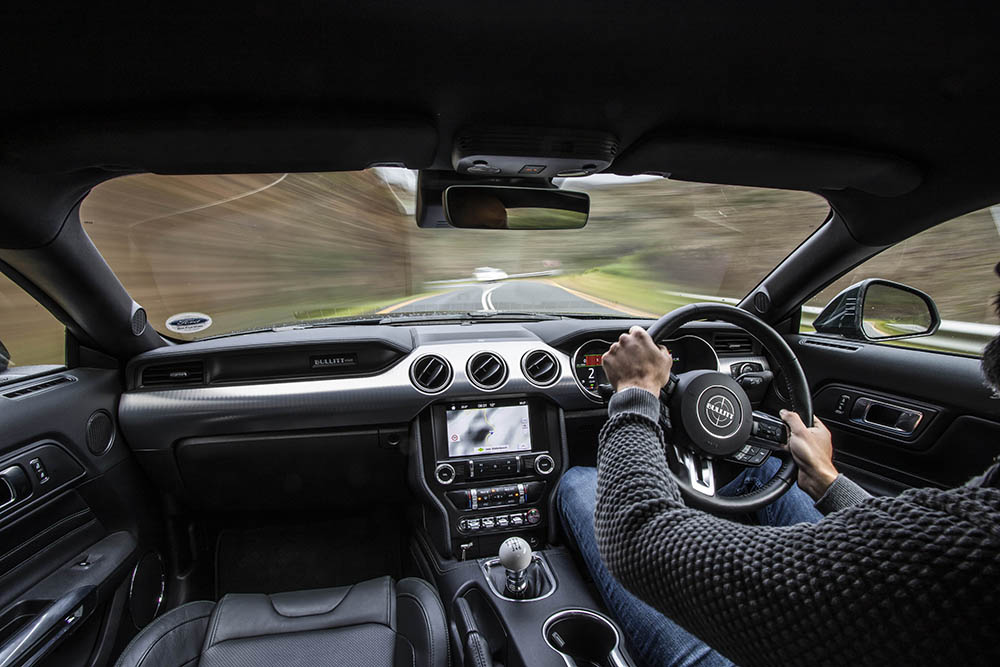 The Bullitt, by contrast, gets a 7 kW bump up to 338 kW, with torque staying the same. Two upgrades borrowed from the Shelby GT350 are responsible for this: a high-flow intake manifold and larger 87mm throttle bodies. To drive it doesn’t feel any quicker than the regular GT. If anything, the alacrity of the punch-it-and-go automatic makes the GT feel quicker. Nevertheless, from the helm, the stomp-and-shift Bullitt feels tough, workmanlike and delivers its performance with unrelenting blue-collar punch. There’s a mellow rumble at low rpm to an almost supercharger-like whine at the top end, and you’ve got to take it all the way to redline to string maximum performance from the Bullitt (peak power lives at 7 250 rpm) but it loves to entertain along the way. 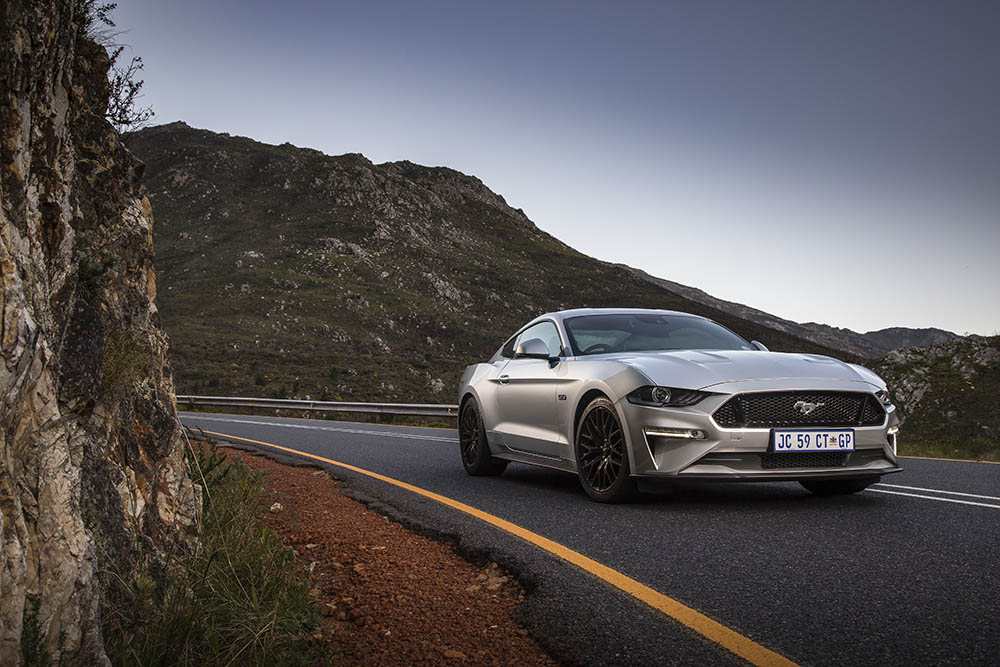 After a few hundred kilometres, and a few driver swaps, it’s hard not to notice how comfortable both cars are, but especially the GT. I was expecting the interior to be a little crude versus the flawless European interiors we’re accustomed to, but they’re both well-appointed and comfortable. The dashboards’ conical shapes intersect with traditional Mustang lines and toggle switches; switches which are a little fiddly to use if we’re being critical, because they only toggle in one direction rather than up and down. There’s even homage to the Mustang’s aviation heritage (the P51 fighter plane of WW2) on the speedometer which says ‘groundspeed’. The Recaro seats are less figure hugging and better suited to large Americans midriffs, shall we say, but they’re a perfect perch from whence to take in the latest Sync 3 fully integrated touchscreen infotainment. 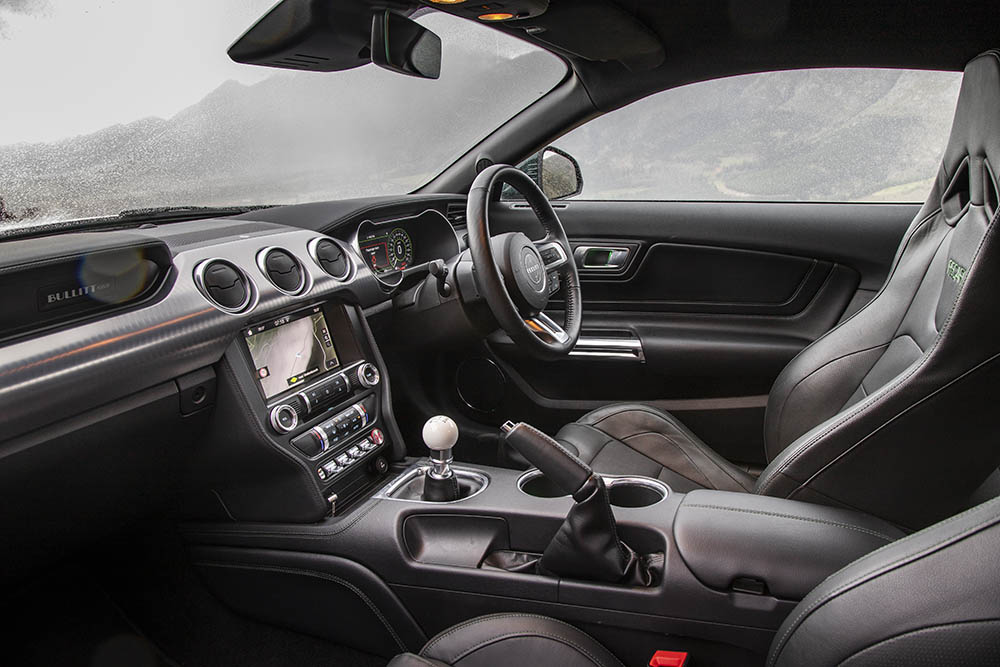 Taking off up the stunning piece of mountain road that is Franschhoek Pass, drive mode selector accessed via the pony button on the steering wheel, I arm it to Race mode, and the driver’s display switches to a motor sport-style horizontal rev counter. The GT instantly shifts from comfy grand tourer to a roaring, salivating V8 stallion, galloping down the road in a manner no classic Mustang owner would be accustomed to. The integral-link rear suspension generates twice as much anti-squat, lift and roll to keep the body level during braking and cornering. Lifelong members of the Mustang live-rear-axle society may protest, but on this demanding road it feels up to the task. Torsional rigidity is up from the previous model, too, but it never feels overly rigid. It’s pliant and well-calibrated for its dual-purpose role; however, optional adaptive damping can be had on the GT to further tailor the ride quality, while Magneride does come standard on the Bullitt. 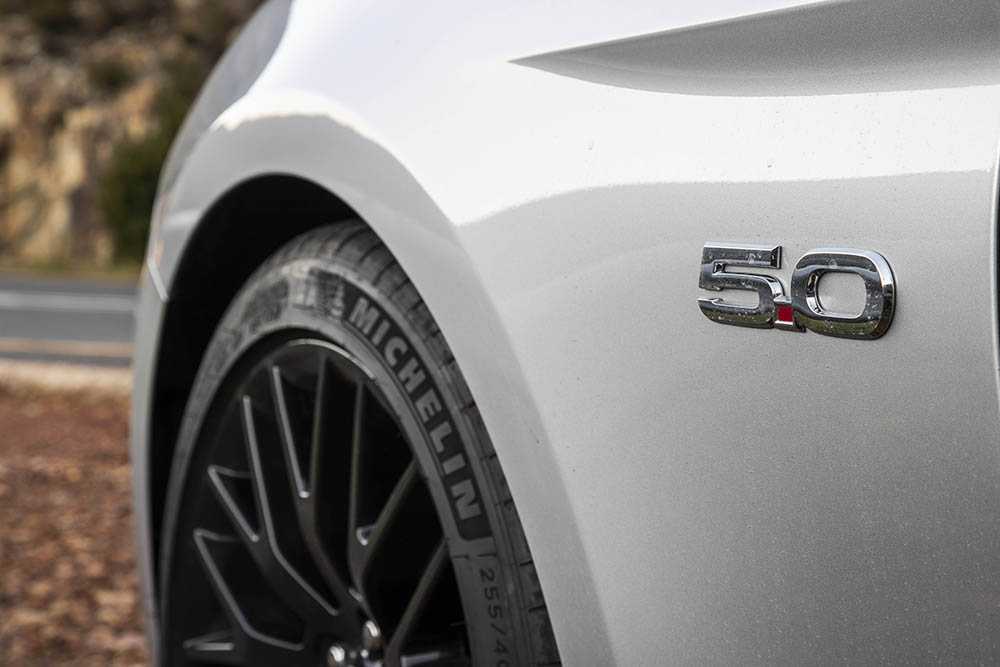 If the suspension communication is a little muted, then the electrically assisted rack is surprisingly responsive, making the long-bonneted front end eager to change direction. Overall, the 10-speed GT requires a lot less from the driver than the Bullitt when driven hard, and as a result it’s probably a little faster point-to-point, too. I can understand Steve McQueen’s strained look of concentration in the movie Bullitt now. But while you’re more likely to be sweating in the Bullitt, it does deliver a rewarding drive all the same, because it by no means does it all for you. This is a Mustang Bullitt after all and you’d feel shortchanged if it did.

After a satisfying Franschhoek blast I swap back to the GT and we mosey on back for a chilled cruise in thickening Cape Town traffic. The verdict being, that while the GT does lack a bit of X factor versus the Bullitt, there are in fact precious few drawbacks to the 10-speed GT and anyone who buys it certainly won’t be shortchanged in the aural and performance department. In-gear thrust and throttle response is every bit as good, if not better than it is in the tall-geared Bullitt. If you can’t get hold of a Bullitt, buy the 10-speed GT, pull off the badges, paint it Dark Highland Green or Shadow Black and away you go. That’s the Mustang way after all. 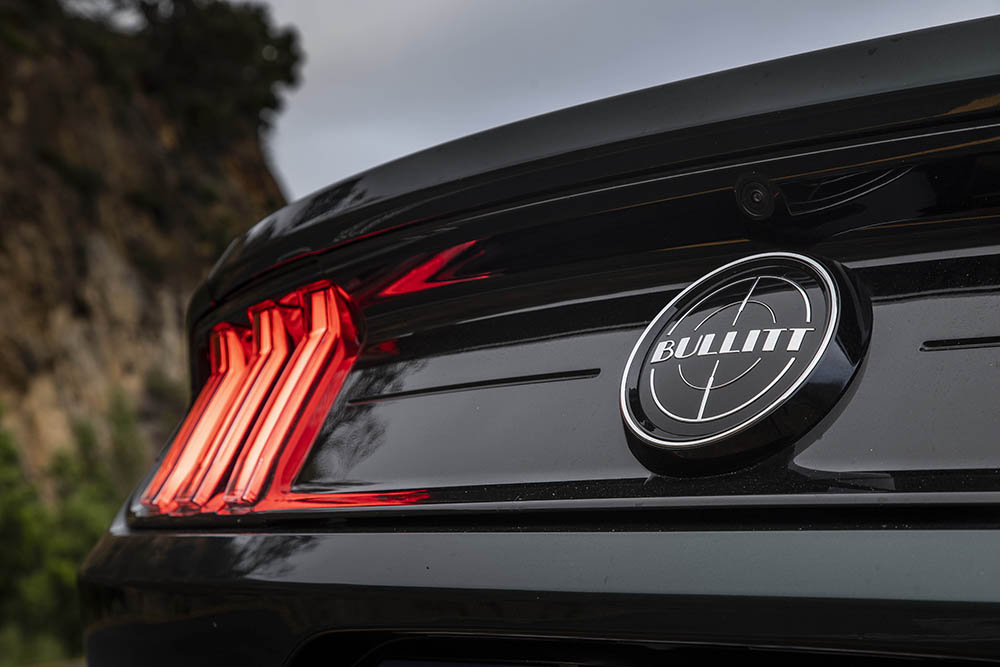 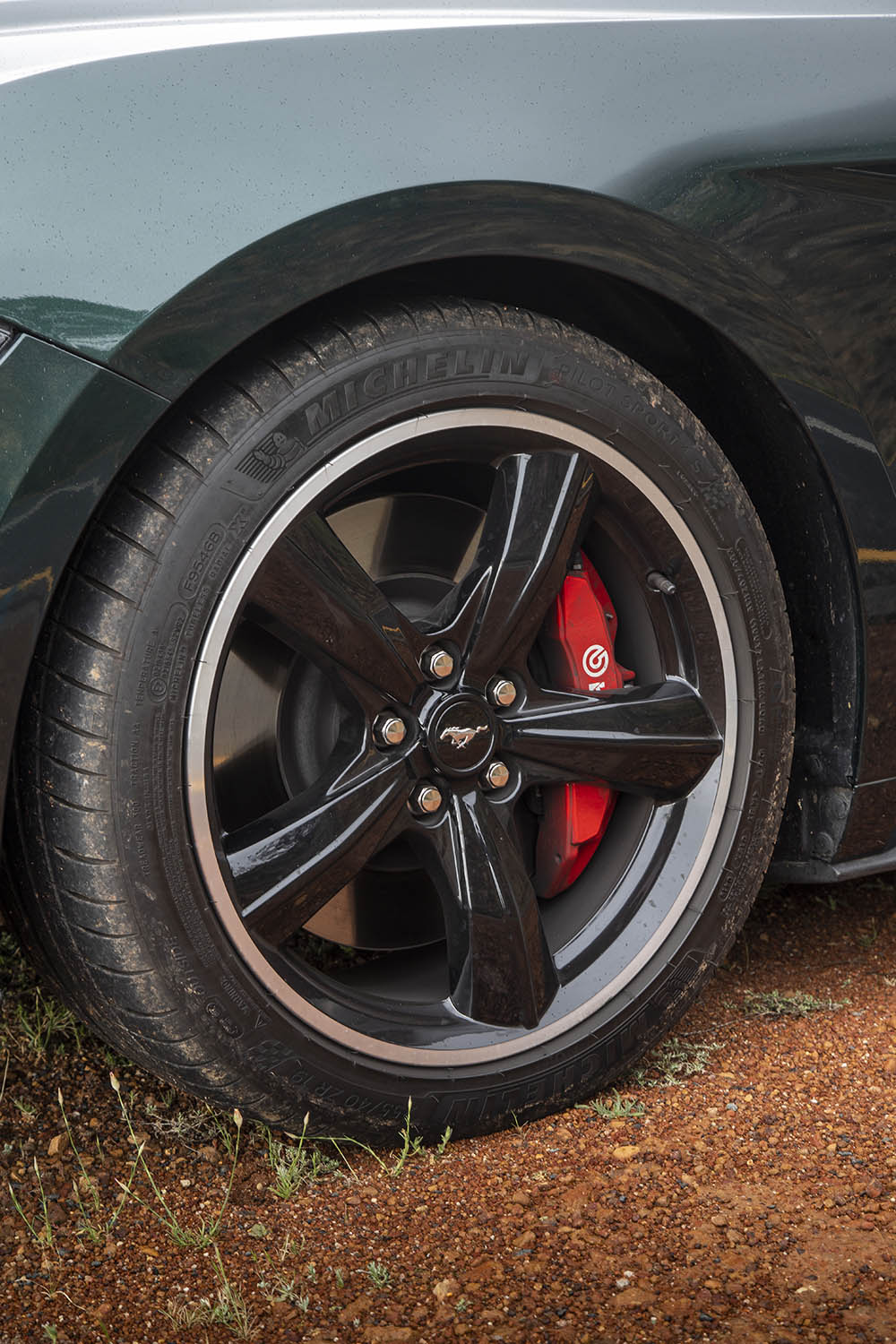 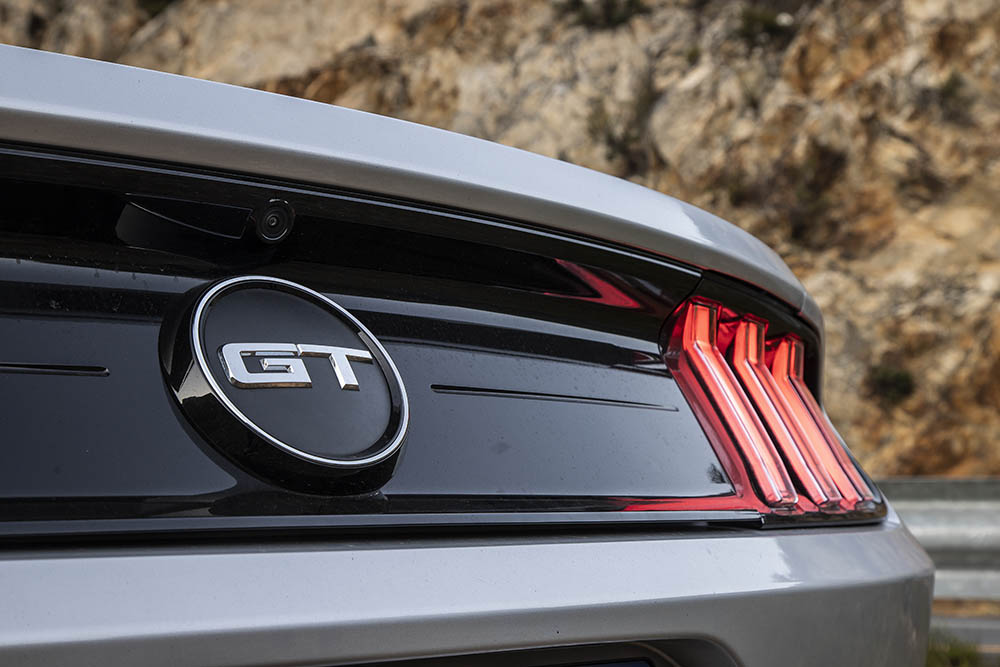 It’s not a Bullitt now is it 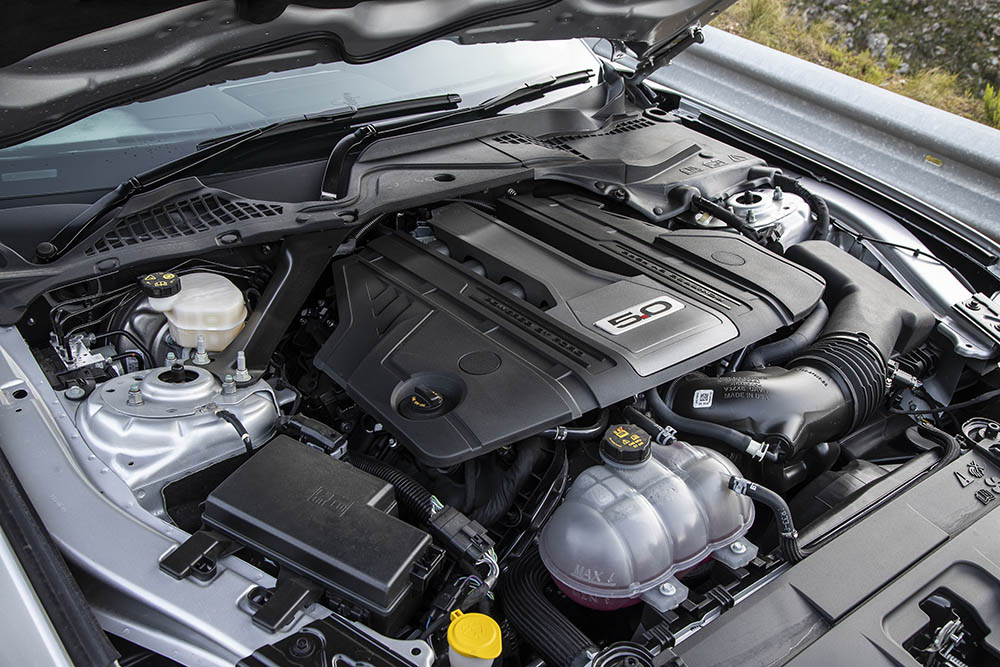 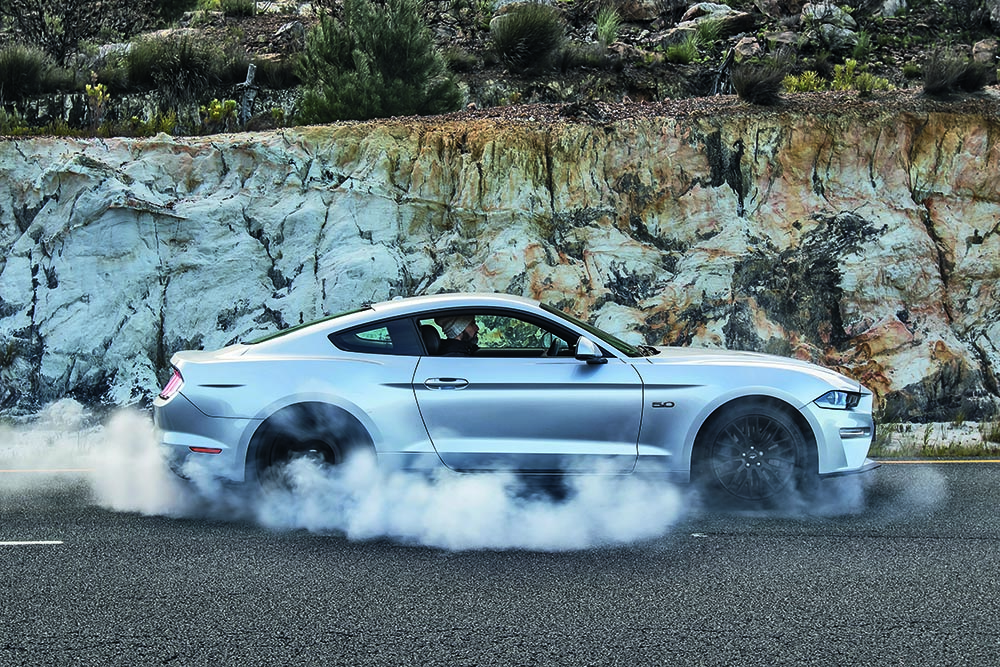