The Overberg district about 70 km outside of Cape Town offers a multitude of flowing well-maintained gravel roads particularly Highlands road connecting the small towns of Grabouw and Botrivier and the Van der Stel Pass road between Botrivier and just outside of Vyeboom. What’s a better way to test a bakkie than to head out to the countryside? Cresting koppies with panoramic views, passing through vineyards and fynbos reserves with tracks that offer steep inclines and slippery declines as well as some tightly banked corners through the mountains. These are all part of the journey and our steed is the Volkswagen Amarok Dark Label special edition. 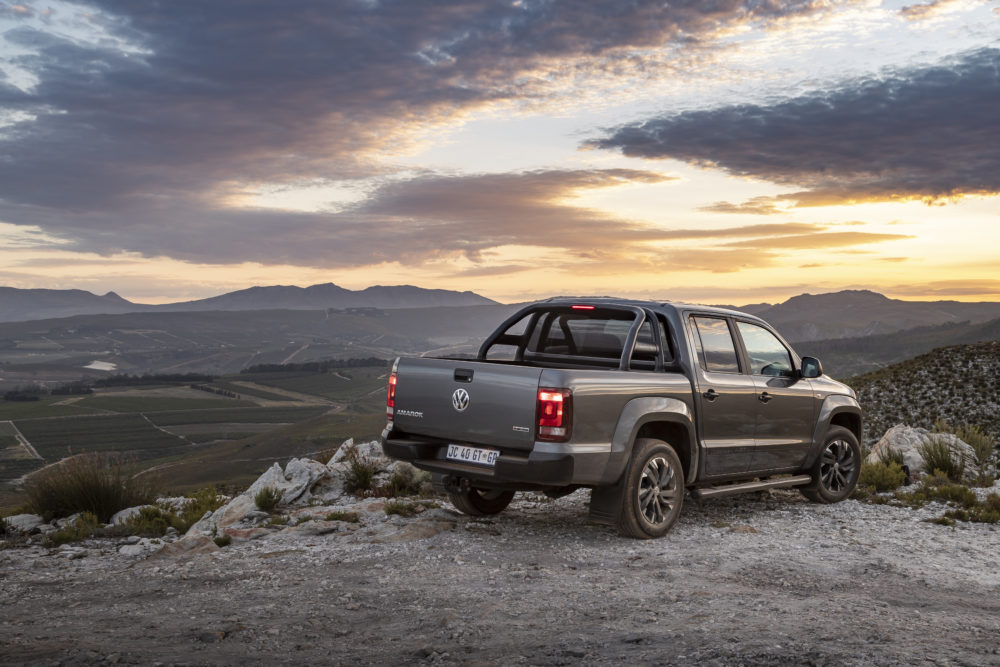 The Volkswagen Amarok has proven itself to be one of the posher bakkies available locally with easy-going suspension and Volkswagens familiar attention to detail. It’s subtly styled compared to its main rivals and its persona is angled towards comfort and on-road refinement rather than hardcore off-road capability. This special edition Dark Label adds to the Amarok’s sophisticated looks providing a very business-like aesthetic, especially when compared to the adventurous V6 powered Honey Orange Amarok Canyon. 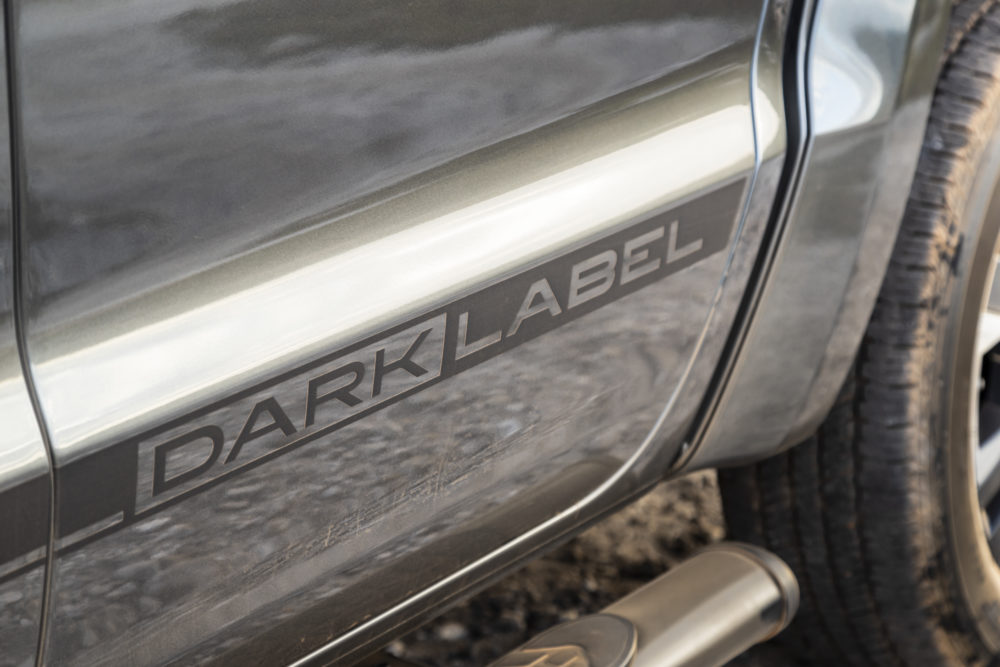 Welcome to the Dark Side

While on test the Dark Label was often referred to as the Black Label. The popular local beer certainly was on the minds of many of the folks that the special edition Amarok came into contact with. That is regardless of the fact that large Dark Label stickers decorate the lower reaches of the rear doors. Apart from the new lettering, the Dark Label receives black finished side steps and a matching matte-black sports bar with Amarok badges embossed on either side. The sports bar is a locally-sourced Maxe item to keep any leisure bakkie fundi happy. Further matte-black finishes on the side mirrors, door handles and front grille add to the menacing styling with smoked taillights, blacked-out B-pillars, dark tinted rear windows and new 18-inch dual-tone Rawson alloy wheels completing the look. Those new wheels look smart but they do stand proud so hardcore off-road enthusiasts may want to invest in a second set of wheels to keep the original items safe from inevitably getting nicked and scraped while attempting to overcome technical obstacles. 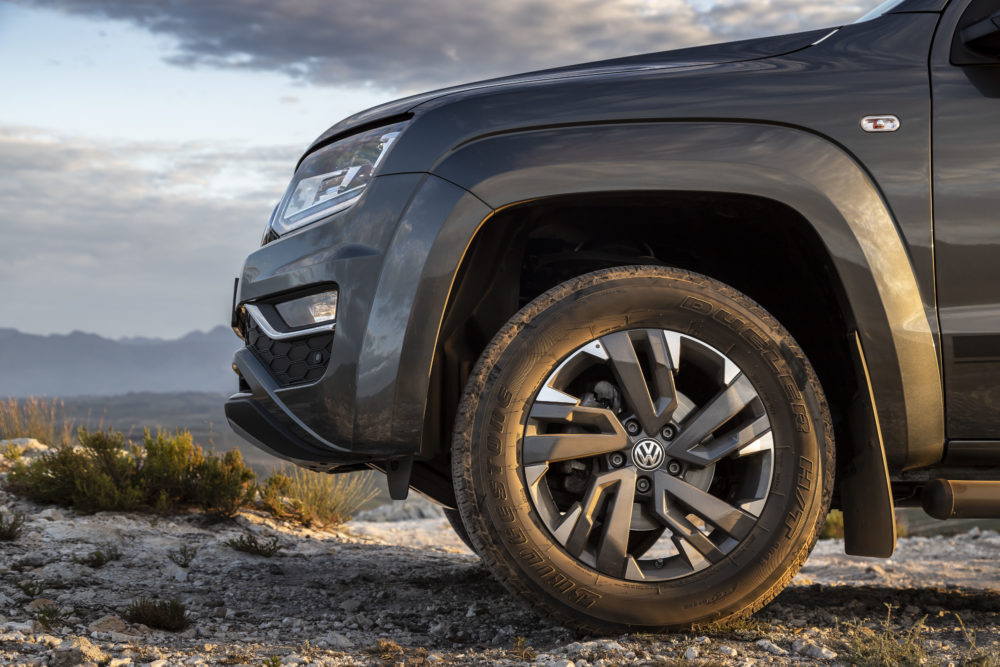 Clamber inside and the special edition touches continue with a black headlining setting the atmosphere for the interior along with black and grey Vienna leather seats. The chairs are comfortable and supportive although manually operated. For over R700 000 you’d at least expect a motorised driver’s seat. The interior may feel a little dated if not somewhat bland when compared to some of its rivals but the quality and comfort of the cabin cannot be faulted. Dark Label motifs are embroidered into the floor carpets too serving as a reminder that you’re inside no ordinary Amarok. 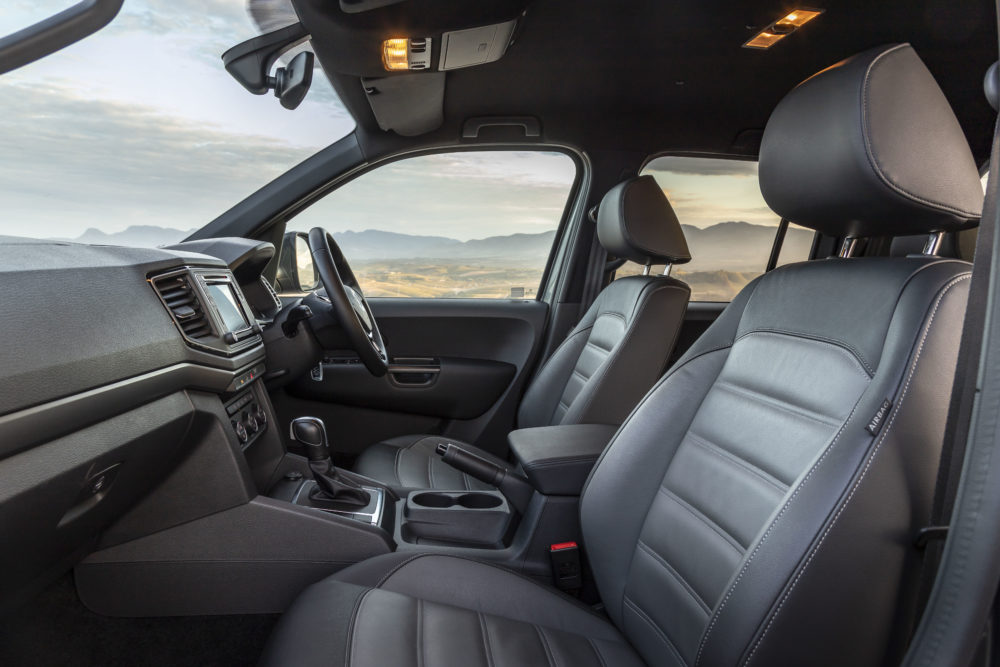 If it ain’t broke…

The fundamental Amarok recipe has remained unchanged since its launch back in 2010 and it is still one of the best riding bakkies on the road. With the arrival of the new Amarok set to be co-developed with Ford, only on the cards for production to begin in 2022, Volkswagen is trying to keep the current Amarok relevant with special editions like this one. Dark Label variants are powered by the well-proven twin-turbo 2.0-litre diesel, the BiTDI in Volkswagen speak. The motor produces a meaty 132 kW and 420 Nm that is mated to a smooth and quick-shifting 8-speed automatic transmission and claims to sip 8.5 L/100 km on the combined cycle. 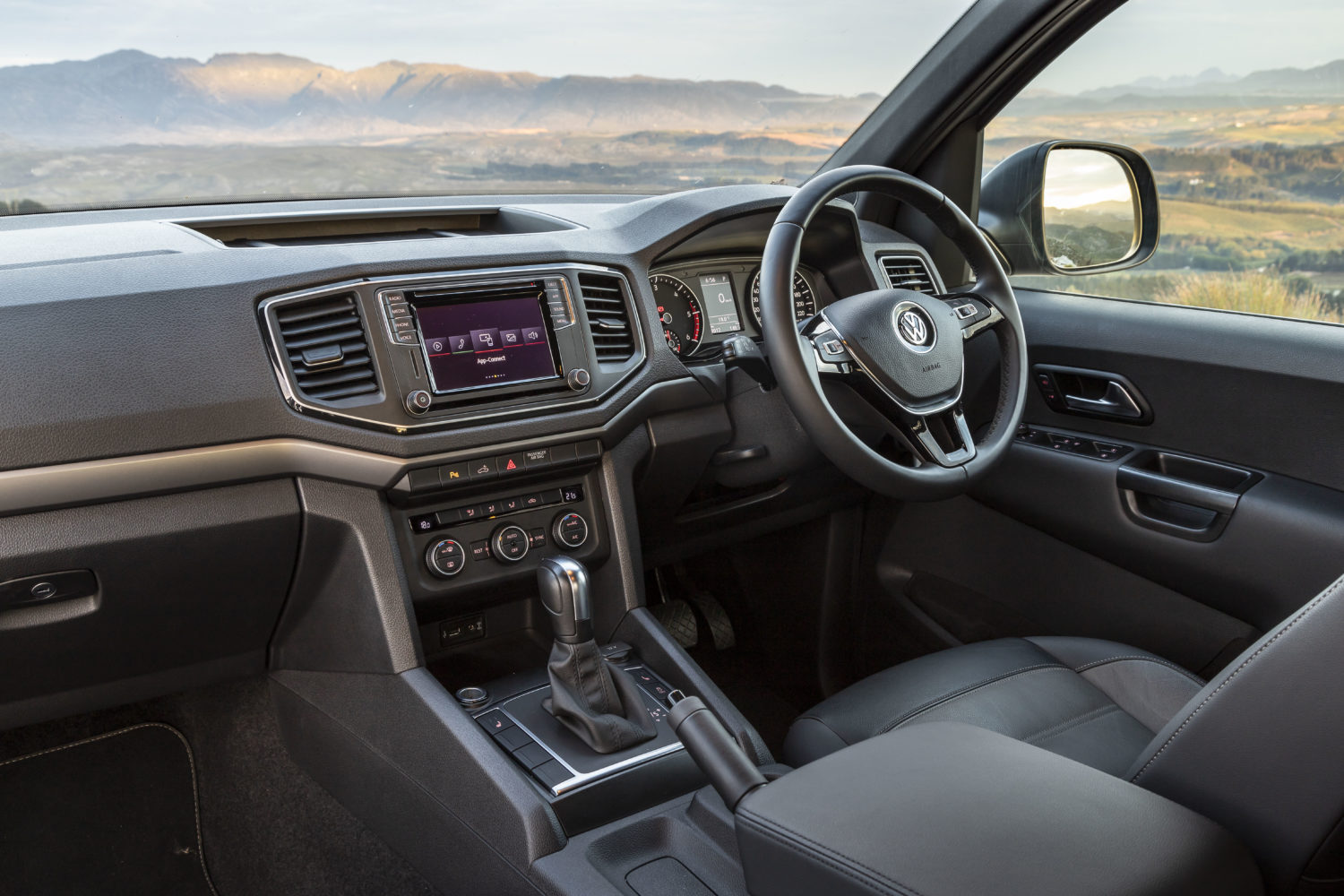 Unlike nearly all 4×4 double-cabs available the Amarok does not come fitted with a low-range transfer case, yet it still offers some seriously impressive capability for when the going gets tough thanks to a low first gear. This blacked-out Amarok may look good when parked at the shops or in the office park, but it’s a bakkie with four-wheel drive so it’s time to get it dirty and see how this new Dark Label Amarok acquits itself off the beaten path. 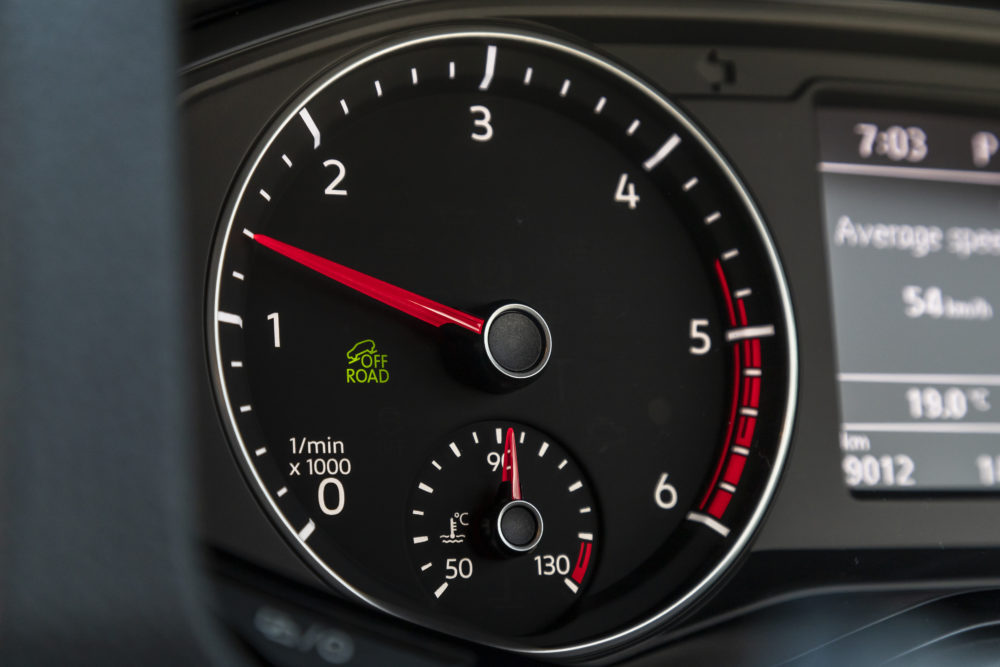 When the asphalt eventually turns to dirt the majority of 4×4 enabled bakkies need the driver to manually engage four-wheel-drive mode either via a button or switch on the centre console to shift from 2H to 4H to ensure optimal levels of traction. For the system to fully engage, the driver often needs to reduce speed and should come off of the accelerator to decrease the load on the drivetrain components for the front axel to successfully engage. Less sophisticated four-wheel-drive bakkies need to come to a complete standstill to engage the front axel and often have a separate lever to pull situated next to the transmission. The Amarok is very different in this regard, there are no levers or switches to control where the power goes. It instead uses Volkswagen’s 4Motion permanent all-wheel-drive system and the bakkie’s onboard brain shuffles the torque around as it sees fit while the traction control and electronic stability programme keep wheel spin in check. To someone who enjoys a good loose surface drive not having to tinker with any 2H to 4H settings can seem a little strange at first. You soon get used to it, however, and put your trust in the capabilities of the clever electronics. Keeping your foot down as the road surface beneath you changes from blacktop to gravel is very satisfying. 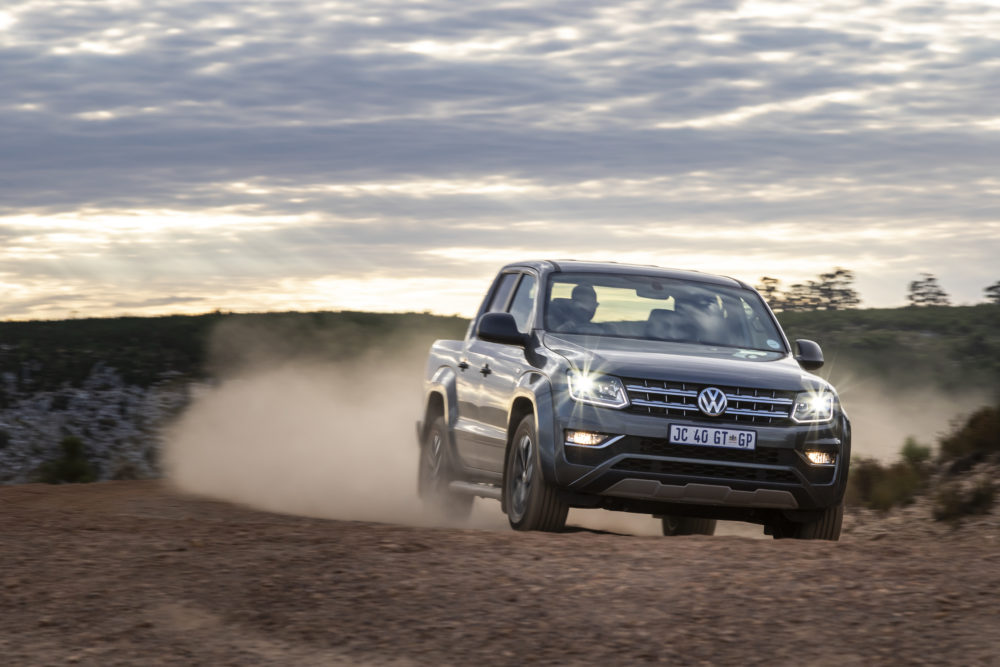 The Amarok has the uncanny ability to isolate the cabin while on gravel, it remains quiet enough to have a hushed conversation while coving dirt at pace. Only the sound of kicked-up rocks hitting the belly of the vehicle remind you that you’re not travelling on a conventional road. The suspension setup feels solid yet is accomplished at soaking up ruts and bumps at speed. The steering system when pushing on is a highlight. The wheel does feel a little too heavy at low speeds but when you up the ante the steering provides superior levels of feedback through the rim into the palm of your hands. This sense of connection allows you to place the big bakkie accurately through tight corners with confidence. Push on beyond the limit of grip and understeer is it’s natural progression and due to the 4Motion system power slides are not a thing. For many enthusiasts, a bakkie that can’t get the tail to slide may seem like sacrilege, however, this is certainly the safer way to go especially if you plan to cover long distances over untarred roads with loved ones onboard. The Amarok feels more like an SUV than an old-fashioned bakkie despite its agricultural leaf-spring rear suspension and the new Dark Label is no different even when fitted with larger wheels shod in road-biased Bridgestone Dueler H/T tyres. 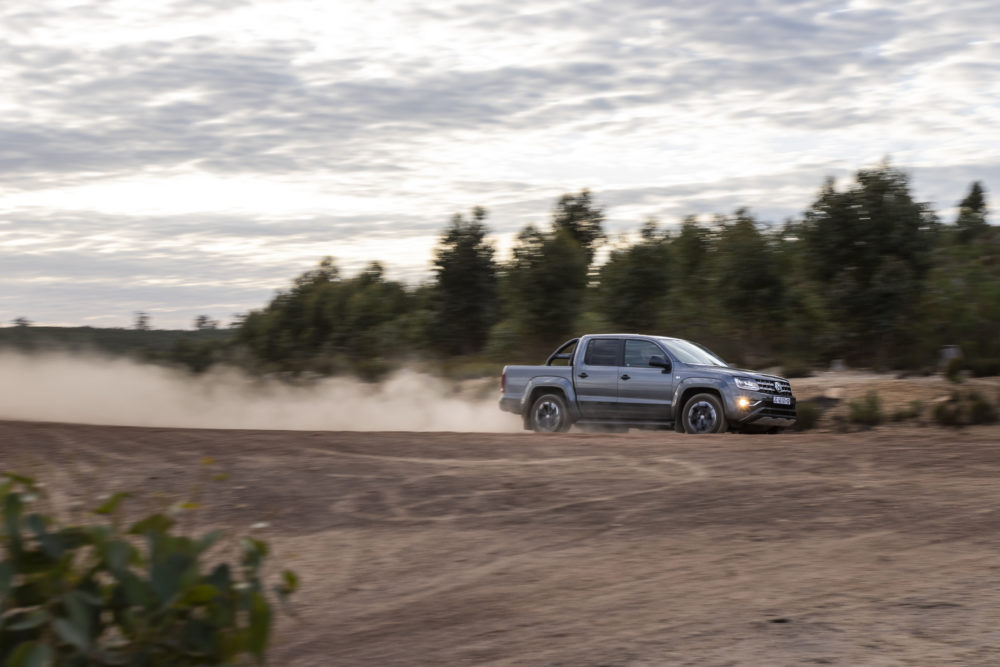 Once the dust has settled

At R709 700 it’s more expensive than the equivalent 4×4 automatic double-cab special edition Nissan Navara Stealth (R683 200) and Toyota Hilux Legend 50 (R689 000) yet it offers better value than its slightly higher-specced sibling in the Amarok Highline Plus which comes in at R732 600. The overall package remains well sorted if not a little too monochromatic for some tastes. When it comes to generating a massive cloud of dust in the rear-view mirror the Dark Label doesn’t disappoint. It remains comfortable and balanced and for a quick dirt-road drive it feels solid and predictable from behind the wheel. For completing seriously tough off-road tracks it’s probably not the obvious double-cab choice with the lack of a low-range transfer case. However, for someone who plans to have a bakkie as the family daily driver with the odd gravel road sojourn in mind, it’s still ahead of the class when it comes to overall comfort and refinement. 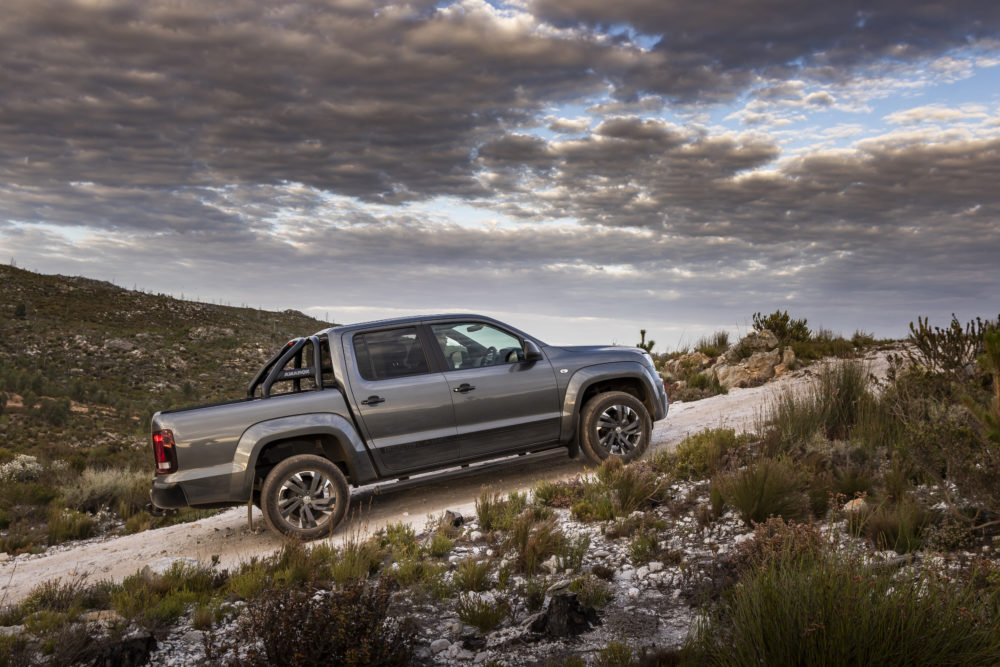 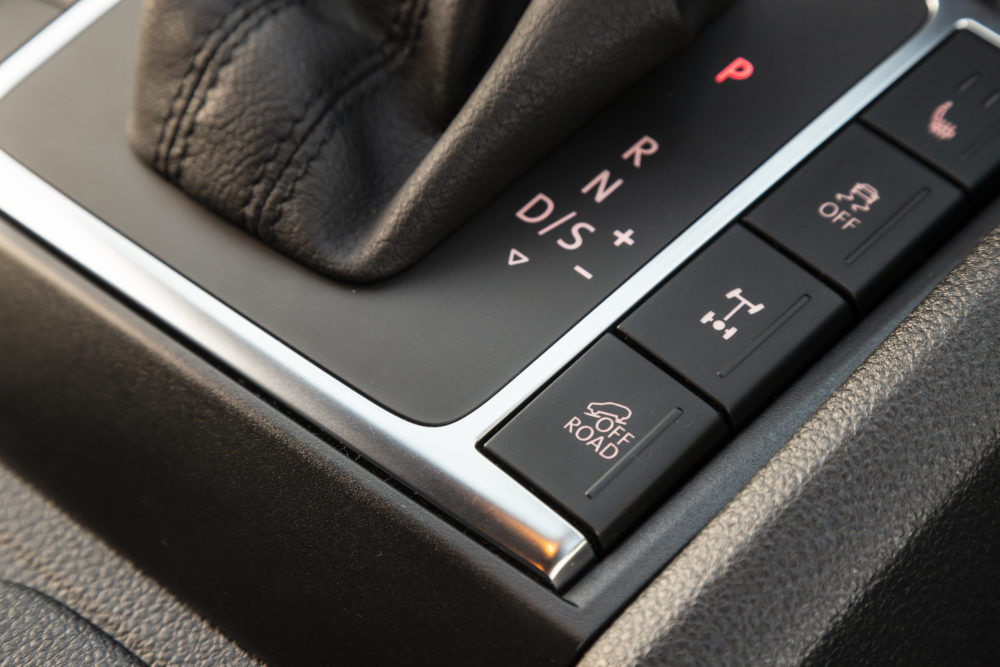 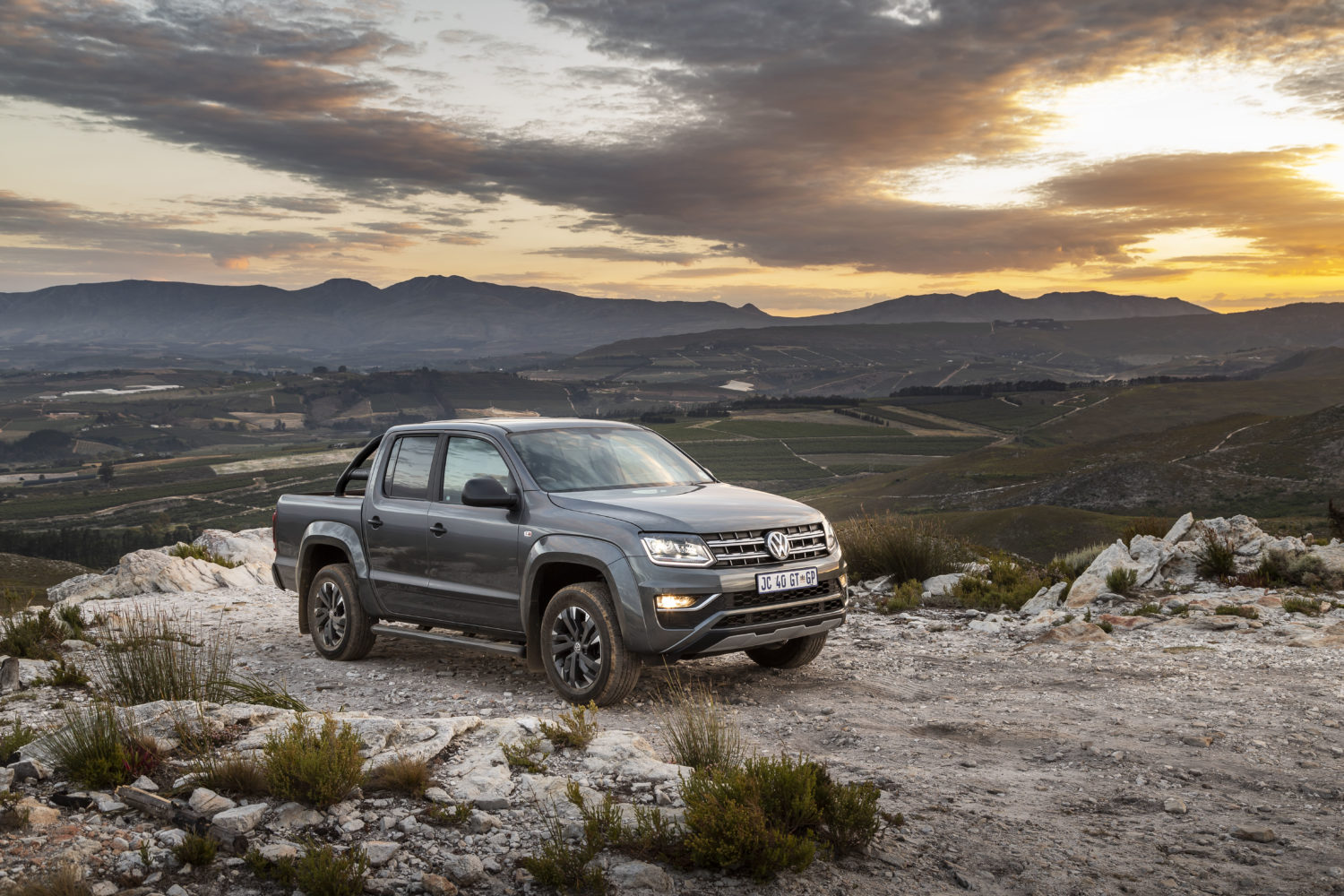