These new fast crossover contenders aim to be all the car you’ll ever need, with niche styling, decent practicality and mighty engines. We find which is best

Top of the class 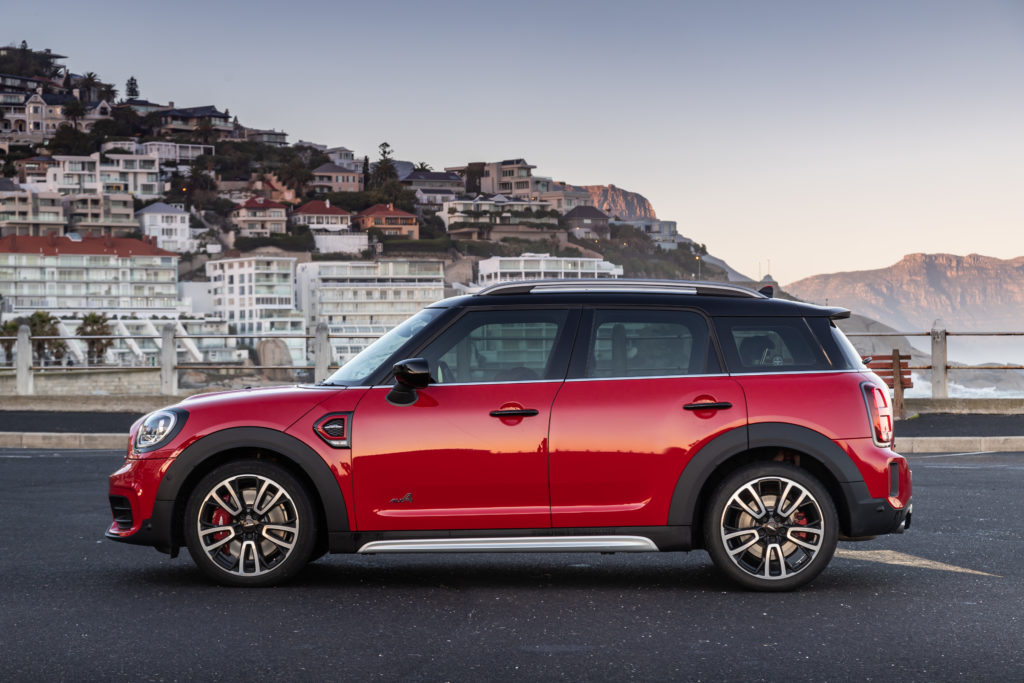 As their badges – RS and JCW – would suggest, both the Audi Q3 and Mini Countryman are top-dog crossovers, fitted with bombastic turbo-petrol engines and enough model-specific exterior items to trumpet their flamboyant performance-orientated personas. The most notable items distinguishing them from their garden-variety stablemates are their deep bumpers, flared wheel arches, RS- and JCW-specific alloy wheels, and chunky tailpipes. And as far as grabbing attention, both have perfectly adhered to the brief. 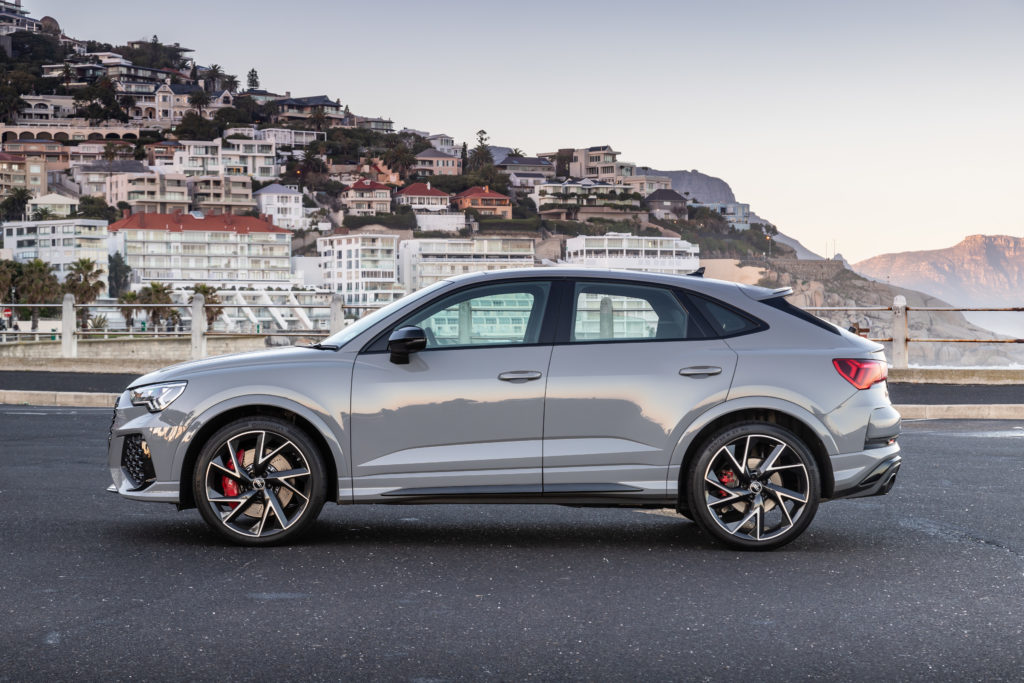 Surprisingly, it is the RS Q3 – dressed in a seemingly conservative Nardo Grey hue – that turns the most heads. The Sportback’s sloped rear suits the RS Q3’s unique SUV shape to a T. The Mini JCW, on the other hand, while more conventional, is far from demure, though its bodywork adorned in red paintwork and accents is less of a showstopper. 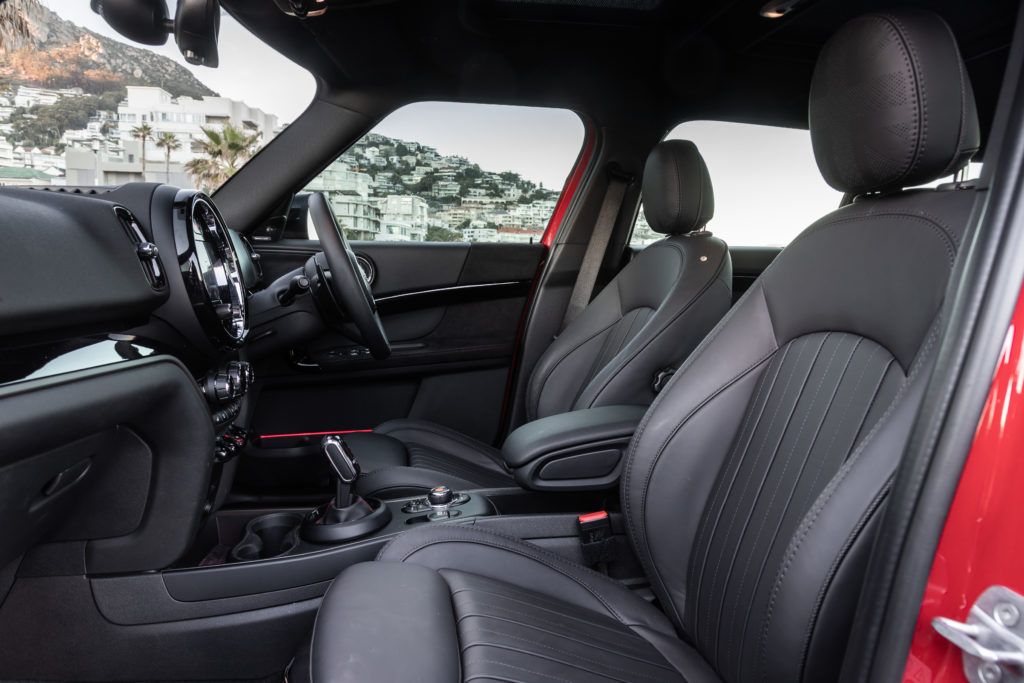 Opening the front doors of the Audi and Mini (via keyless entry) reveals cabins with polar-opposite approaches to interior design. Brimming with modern tech, the JCW Countryman maintains its familiar, true-to-its-roots cabin layout. As we’ve become accustomed to from the British marque, the Mini’s interior is lathered with unique details and – as this is the sportiest Countryman – myriad JCW-specific fittings. It’s an event being onboard thanks to the sporty touches and Mini-specific design. Like its Cooper and Cooper S stablemates, the most notable revision is the addition of a digital instrument binnacle. Ahead of the driver is a 5.0-inch multifunction display flanked by a tachometer and fuel gauge that relay all the necessary driving information, such as speed, mileage and navigation. Look really closely and you’ll notice that the steering-wheel-mounted instrument binnacle, although perfectly legible, is slightly off-centre from the steering wheel, which is a bit odd. While it is familiar and funky Mini fare, the cabin now features an array of additional technologies, such as our test unit’s Apple CarPlay- and satnav-enabled 8.8-inch infotainment touchscreen, operable via the multifunction steering wheel or centre-console-mounted analogue dial. The user interface was good, but the system felt dated and not a big step up from that found in previous Minis. 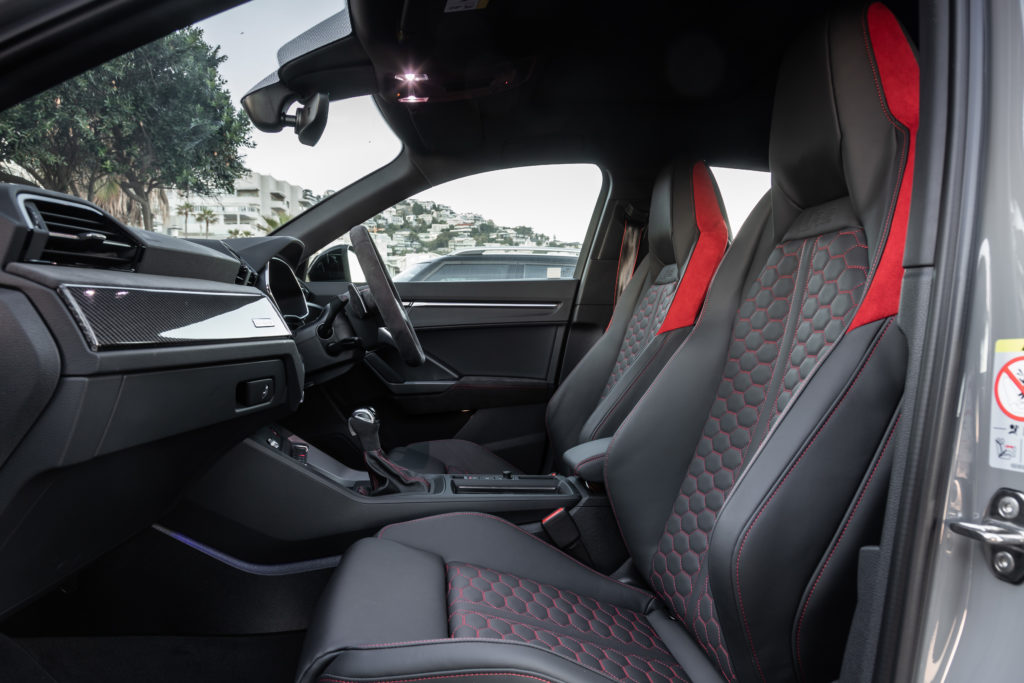 The RS Q3, on the other hand, takes a more straightforward, stereotypically German approach to interior design. We’ve written extensively on how well built and neatly laid out Audi cabins are and the flagship RS Q3 is no exception. Despite the lack of the dual touchscreen arrangement of its bigger RS Q8 sibling, we welcomed Audi’s decision to maintain the single 10.1-inch infotainment display with screen mirroring and sat-nav, and pleasingly tactile dials for the dual-zone climate control. Located ahead of Audi’s leather-trimmed steering wheel, featuring a configurable RS button, is Ingolstadt’s 10.25-inch Virtual Cockpit. Like the corresponding item in the Mini, it provides the driver with all the necessary information in a bright and clear display. Although not as flamboyant, it was the Audi’s interior that is the better executed space between these two hot crossovers.

Time to be entertained 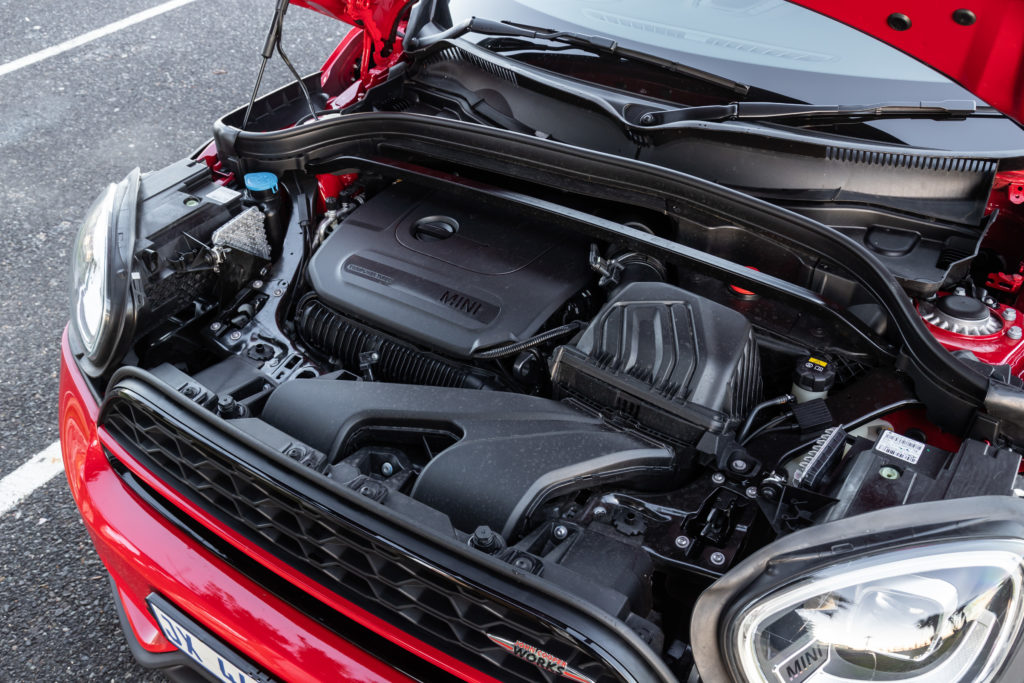 Dialling in your preferred driving position is a cinch in the Audi thanks to the electrically adjustable RS-specific driver’s seat. The Mini, curiously, makes do with only manual adjustment, but once you’re settled in the JCW Countryman, it’s comfortable. Pressing the Audi’s start button unleashes a vociferous five-cylinder snarl. The inline 2.5-litre provides arguably one of the best soundtracks this side of Audi’s sonorous V10. Activate Dynamic on the drive select system and the RS Q3 begs to be let off the leash and driven hard. On the move, it feels typical of what you may expect from any Audi Sport product: ballistically fast in a straight line, with tons of grip into a corner thanks to the quattro all-wheel drive. Even on its tippy-toes in crossover form, body movement is kept in check, although the steering felt lighter than expected, but still direct enough for precise direction changes. 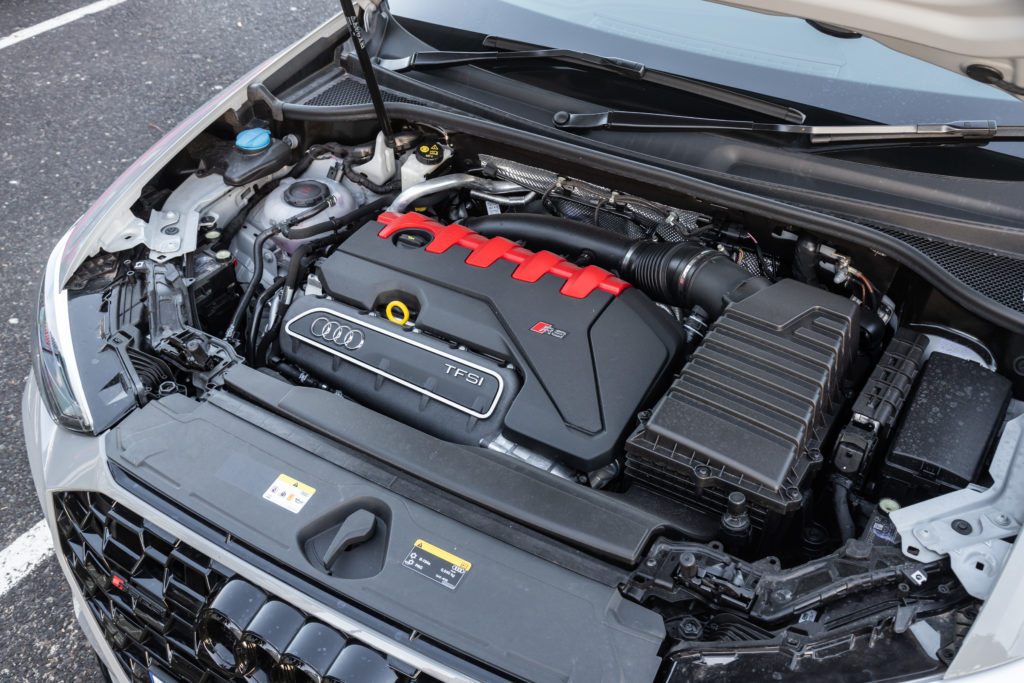 Even before starting up the Mini, there’s theatre, surprise and delight, the red starter button aglow, urging you to fire up the engine. The Mini’s BMW-sourced 2.0-litre turbo petrol in Sport driving mode provides pleasant pops and bangs on the overrun as you travel along. It may not be as powerful as the Audi, but piloting the Mini is hugely entertaining. The JCW Countryman’s steering is more direct, sharper than the Audi’s, if anything. Mini may have gone a bit too far for some as it feels a touch heavy to manoeuvre at lower speeds, but this adds to the aggressive nature of the car. The boxy Brit also showed a bit of body roll when cornering. Still, thanks to its extra wheel travel and suppler suspension, it’s easy to agree that the JCW Countryman had the more resolved ride of the two around town.

Race against the clock 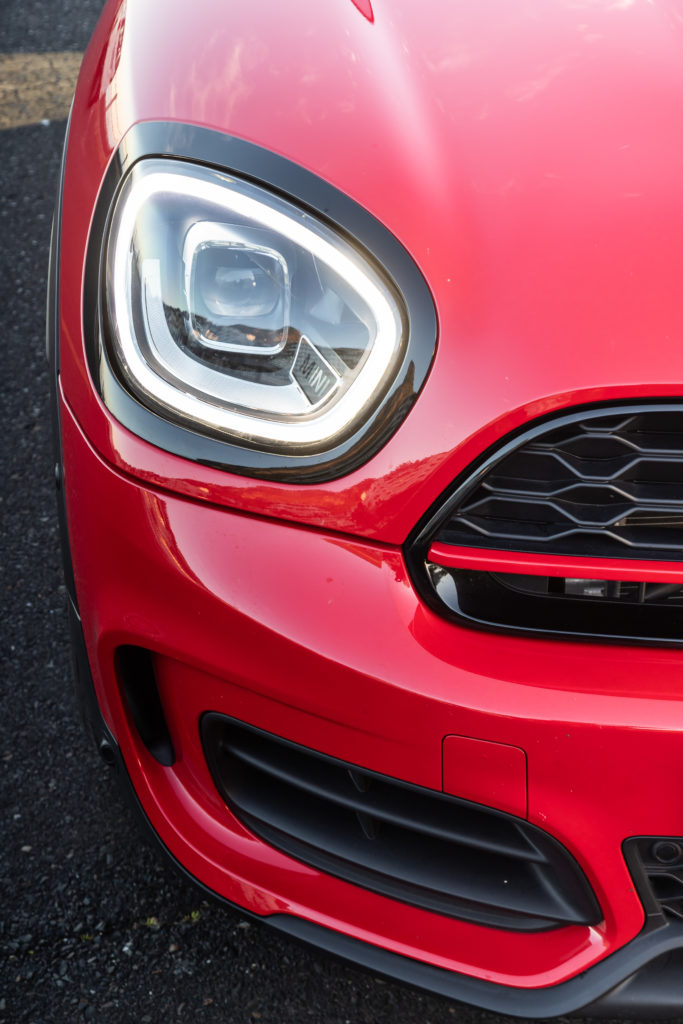 Against the stopwatch, the test results registered by our two combatants made for interesting reading. In the 0–100 km/h sprint stakes, the powerful RS Q3, with its sonorous 294 kW and 480 Nm five-pot, bested the Mini by a fraction of a second – 0.22 seconds to be exact – with an acceleration time of 4.93 seconds. This figure was 0.43 seconds slower than Audi’s claimed 4.50-second benchmark time. The RS Q3’s launch control system displayed a slight hesitancy between engaging and the vehicle setting off. Beyond that, the quick-shifting seven-speed S tronic transmission moves rapidly through its gears. The JCW Countryman’s 0–100 km/h time, while slower at 5.15 seconds, was just five-hundredths of a second off Mini’s claimed time. The zero to 40 km/h, to 60 km/h and 80 km/h sprint times delivered even more data to chew over. The RS Q3 was but one-hundredth of a second quicker to 40 km/h than the Countryman. To the 60 km/h marker, the Mini was 0.08 seconds quicker. From zero to 80 km/h, the Mini was again quicker than the Audi, with a tested sprint time of 3.64 seconds compared to 3.81 seconds. Fractions of seconds, we agree, but notable all the same. 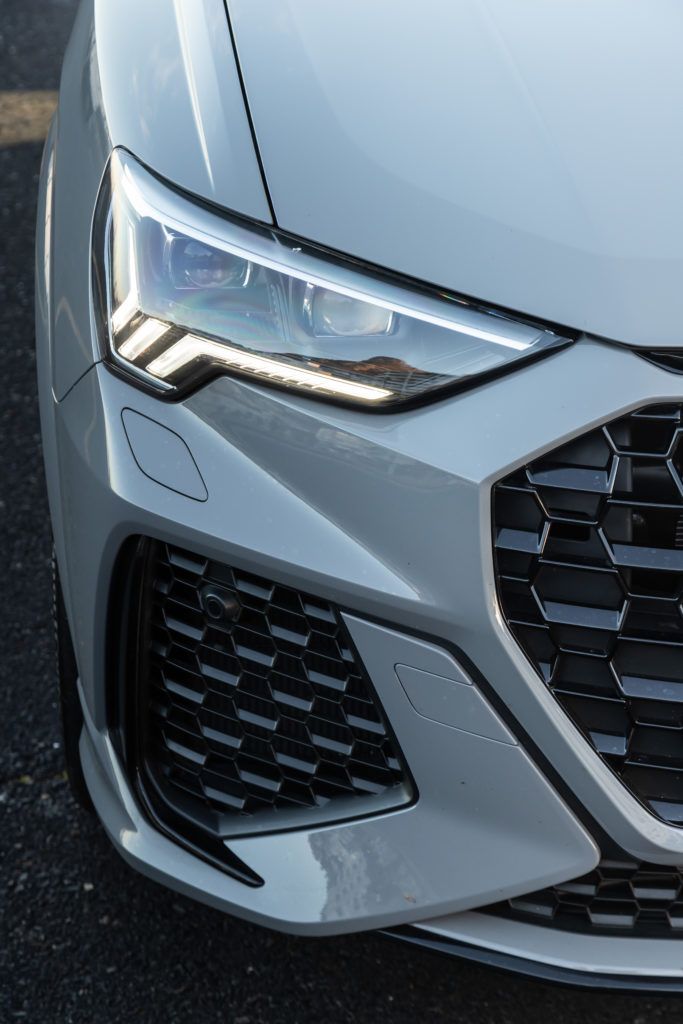 The Mini, with its smaller 2.0-litre four-cylinder motor, managed to keep pace with the rip-snorting RS Q3. Reasonable explanations for this are that the Mini makes peak torque fractionally lower in the rev range (1 750 rpm compared to the Audi’s 1 950 rpm) and, critically, the JCW Countryman’s lighter body saves 50 kg over the RS Q3. The RS Q3 did best the Mini from zero to 120 km/h and zero to 140 km/h and during in-gear acceleration, the Audi’s dual-clutch ’box did a commendable job of hustling through the speed range. From 60 km/h to 100 km/h and 100 km/h to 140 km/h, the RS Q3 registered times of 2.57 seconds and 3.51 seconds respectively, 0.35 seconds and 0.93 seconds quicker than the Mini. 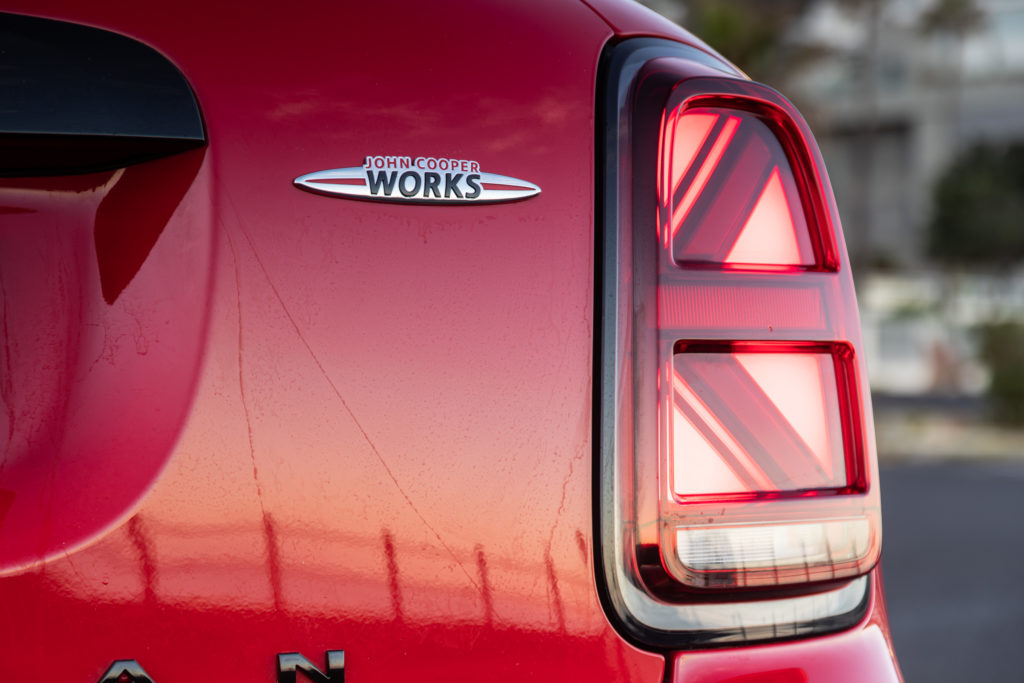 If the Audi is the king of acceleration, it’s Mini that receives the nod for outstanding braking capabilities. Fitted with a redesigned sport brake system featuring four-piston callipers all-round, the Mini’s ventilated 360 mm fore and 330 mm aft discs brought it to a halt in an excellent time of 2.95 seconds over a distance of 37.38 m. Although the RS Q3’s six-piston RS steel discs (measuring 375 mm fore and 310 mm aft) managed to bring proceedings to a halt 1.02 m sooner, it was, on average, eight-hundredths of a second slower. 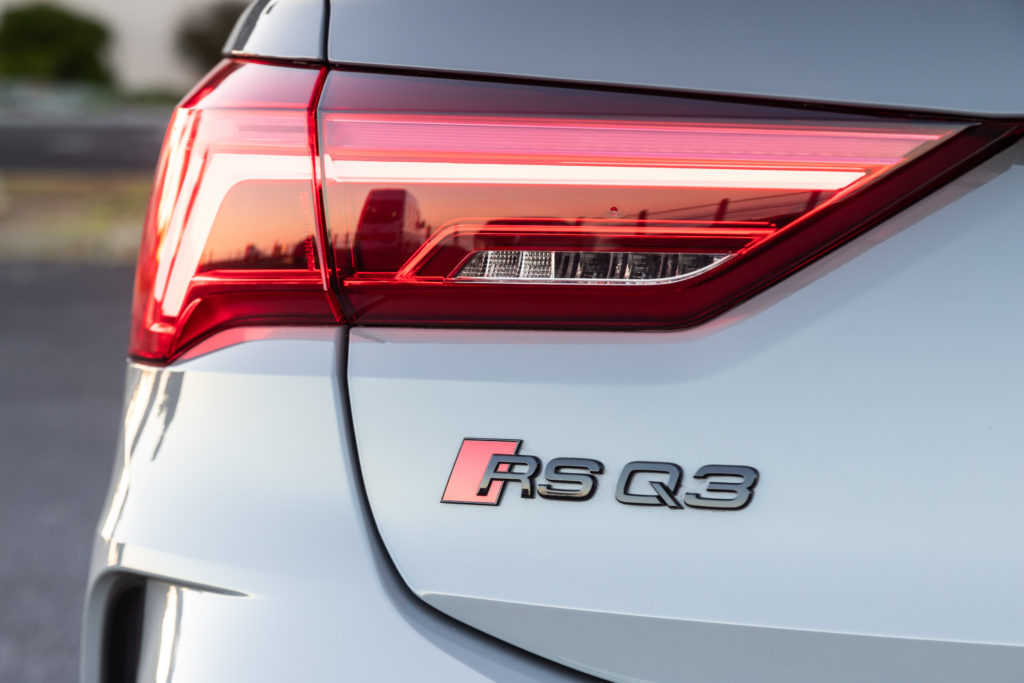 When all is said and done

If we were pressed to differentiate between the performance crossover duo, the RS Q3 is the better-sounding and more performance-orientated crossover, although the hesitancy off the line did take some lustre off its performance; this lag, however, is characteristic of Audi’s five-cylinder motor. The Mini JCW Countryman, on the other hand, exudes character from the first press of the starter button and is entertaining to drive more of the time. The performance gap between the two is marginal on the road and both are faster than you would expect. That said, we cannot ignore the Audi’s steeper price tag. After much consideration, it’s the JCW Countryman that, by an absolute whisker, takes the win here. That said, in this instance, both the JCW Countryman and RS Q3 proved what fast crossovers are all about.