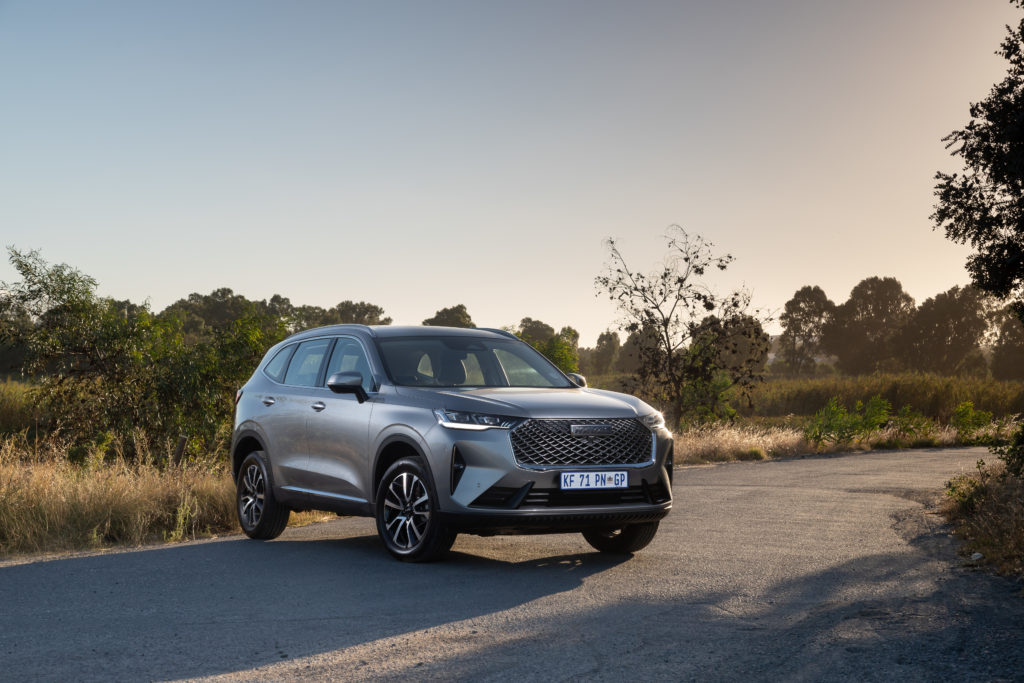 From looking at the Haval H6 and Chery Tiggo 4 Pro, one thing is obvious – these guys have stepped up their game in the design department. The H6 cuts a commanding figure with its large, vertical grille and angry LED headlights, and the rear end, with its full-width LED strip and roof spoiler, looks fantastic. It’s built on the same high-strength, low-weight platform as the Jolion, but has a bit more heft to it, befitting its segment, and the whole design just works. The Tiggo 4 has an altogether more playful feel to it, not entirely as slab-sided, while retaining a sporty ruggedness – definitely helped on by the black alloy wheels on our Elite model – and the soft metallic blue of our test unit is really quite pretty. Both cars feature a grille with a kind of three-dimensionality to them, quite nice to look at, and neither really has any bad angles, looking chunky and curvy in all the right places. 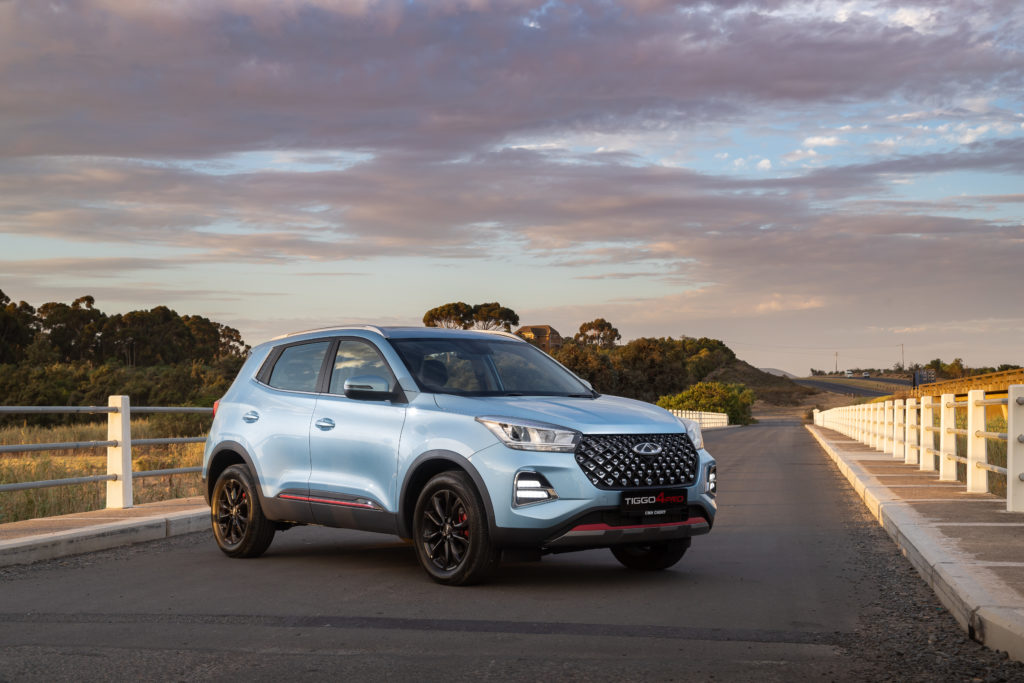 If you’re into gadgets, bells and whistles, you’re going to feel very comfortable in the H6 or Tiggo 4 Pro. The entire H6 range has leather seats, a leather steering wheel, smart start/stop, auto wipers, keyless entry, start/stop button, rear parking sensors and camera, variable driving and steering modes, paddle shifters, an electric driver’s seat, six airbags and all the connectivity you want: Apple, Android, USB, Bluetooth, you name it. In everything above the entry-level model, it’s a 360° camera, one-touch windows, a bigger 12.3-inch infotainment screen, adaptive cruise control with lane keeping, pre-collision warning and traffic sign recognition, and the simple aircon becomes automatic dual-zone climate control. The Tiggo isn’t far behind regarding its feature set; it’s all basically the same stuff you get in the H6, except only regular cruise control, and parking sensors and camera at the rear only. It does, however, come with ambient lighting in the form of a discreet line that runs across the dash and the front and back doors. Nice. Believe us when we say neither of these cars really want for much when it comes to features. And again, this isn’t a direct comparison. Neither car offers anything in the way of options, with the trim levels adding more standard features as you level up. We don’t mind this; the price on the tag is the price you pay. 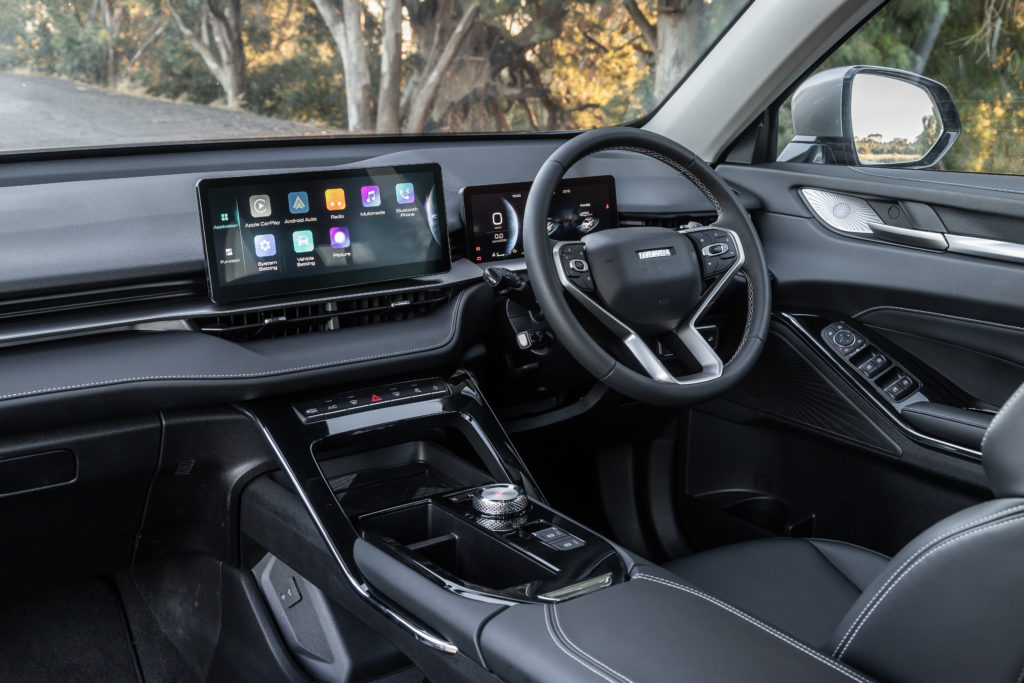 In the H6, the sound system, drive modes and climate control are all operated via the infotainment screen, with hardly any physical buttons on the dash. The 360° camera’s full-screen display takes over whenever you’re manoeuvring at low speed, or when you’re stationary with the indicator on. Stationary at a traffic light, for example, is a great time to, say, select music to play, adjust the aircon, or select a different driving mode, but if you have the indicator on, sorry. And there’s no way to override it. Having to swipe across to the second home screen to find drive modes while driving isn’t great either. The little sill to the right of the steering wheel would’ve been perfect for a drive mode selector. That said, the touch screen is big and clear, and everything works pretty intuitively. Another great touch is the gear shift. The H6 uses a rotary dial gear shift, but where some iterations have been finicky, this one is genuinely great. It’s made of heavy, knurled metal, with only R, N and D/M around the perimeter and P on a big button in the middle of the dial. To select reverse, just flick it to the left. Drive, flick it to the right. It’s easy, tactile and, well, feels cool to do. The instrument cluster is also quite interesting, in that it’s not been recessed, but rather set proud ahead of the steering wheel. The display here is also crystal clear, with light conditions never affecting visibility of our revs, speed, or driving info. There’s also plenty of storage space; we quite like the double-decker console. 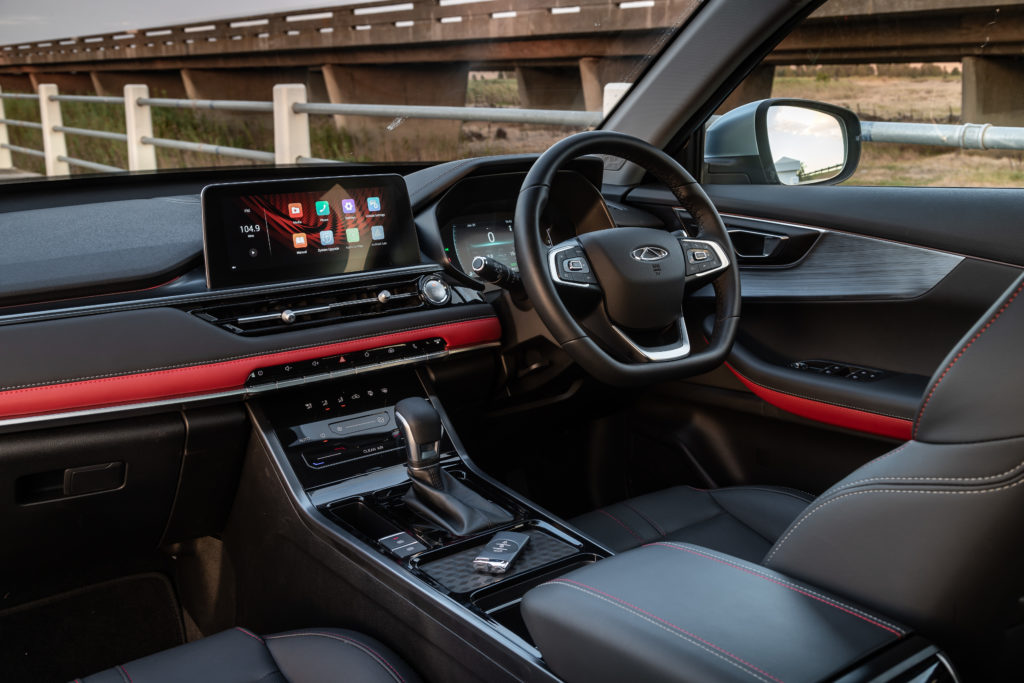 The Tiggo has a number of nice touches, too and is really quite endearing. The leather-covered fascia looks sporty, especially with the red leather accents and ambient lighting in our test model. The sliders on the air vents feel heavy and well made, as do the door handles. When you approach the car, it wakes up and the mirrors pop out, like a puppy hearing ‘Walkies’. The mirrors also project ‘Tiggo’ on the ground next to the car. It’s so silly, we love it. Oh, and if you’re doing 60 with the cruise control still set to, say, 120, activating the cruise control will make the Tiggo 4 enthusiastically mash the accelerator pedal, as if it really wants to please you. The 10.25-inch central infotainment screen is clear and intuitive, but media handling is odd; maybe we just couldn’t find it, but we couldn’t select albums or artists, so we heard every song on our flash drive in alphabetical order. There also aren’t audio EQ settings – treble, bass, balance and the like. The Tiggo has physical air-con controls and a button for driving modes, which we like. The console is shiny black plastic where the H6 has piano black. The piano black is maybe 30% nicer, but also 80% more likely to collect fingerprints, so this is an okay trade-off. Its digital instrument binnacle is more traditionally placed, and also clear and easy to read. 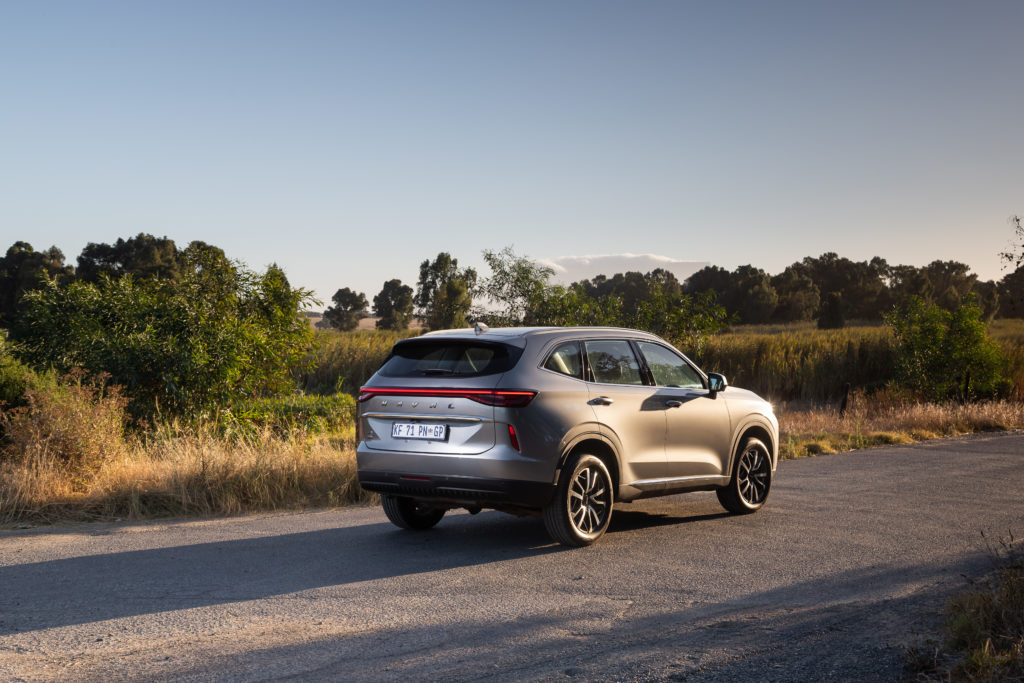 Taking it to the street

The all-wheel-drive H6 Luxury we had has specialised driving and terrain modes – Standard, Eco, Sports, Snow, Sand and Offroad, with the last three being AWD-only. Tearing down dirt roads in
the Cape winelands, the H6 always felt composed, with the on-board safety systems only needing to
step in when we had more throttle than sense. The entire range gets ESC, traction control, cornering brake control, brake assist, anti-roll and secondary collision mitigation, and up- and downhill assistance. Everything we got to try out worked perfectly. On the road, the H6 feels comfortable and easy, with ample power – you’ll appreciate the adaptive cruise control when you see how eager and sensitive the throttle is. You only need to feather it very lightly to get the car properly moving. The ACC was also a godsend in traffic, and we followed comfortably at a slow crawl. It does seem a bit nervous on long bends, though; we think it sometimes sees cars one lane over, but then technically in front of it, as cars in its lane. Nothing dangerous, and we realise no one’s adaptive cruise control is really perfect. But we’re really nitpicking here; having this little to complain about makes a blank page look pretty scary. 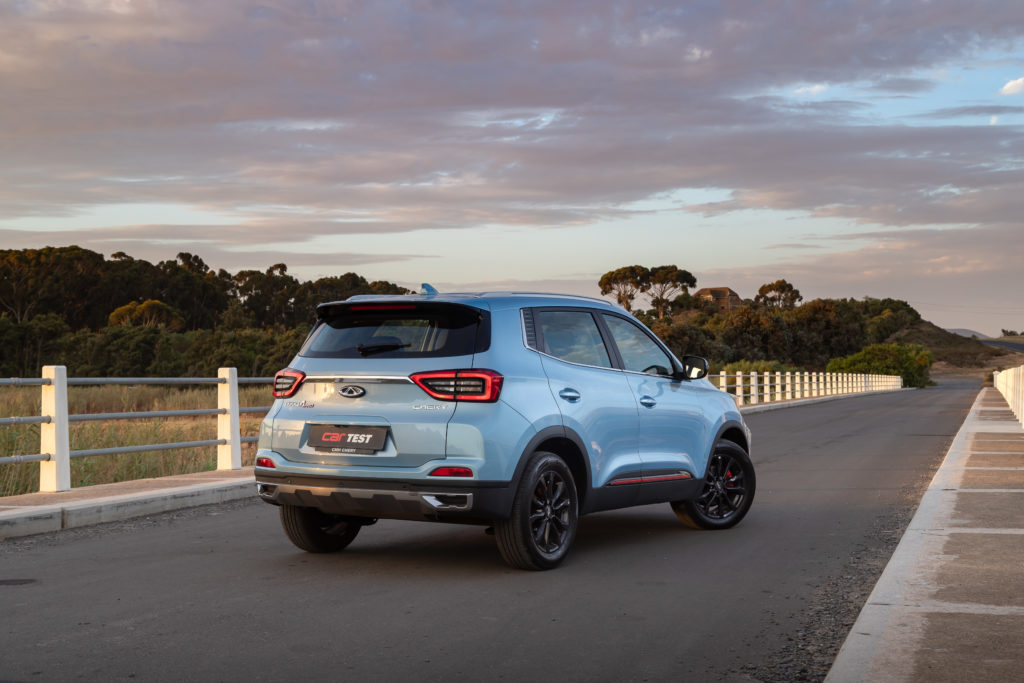 The drive in the Tiggo, too, is perfectly comfy, if a little bit unengaging. The 1.5 turbo does its job, but isn’t a racer – not that it’s trying to be. And as you know, motoring journalists are required by law to complain about CVTs (we are obliged to object to the sound, you see), so you can see the bind we’re in. Jokes aside, if you’re a normal person and don’t mind CVTs, you won’t mind this one. If you do mind them, we can report that a six-speed manual we got to drive around the block a couple of times feels reasonably good and keeps the revs where you want them, so there’s an option. The car feels nimble in town, and stable and planted at highway speeds, with noise not really a problem, even taking our manufactured outrage at the CVT into account. Generally, it’s just a nice little car to drive.

It’s remarkable how far these companies have come in their short time catering to the whims of western markets. There’s really not much to complain about in either of these cars – build quality, fit and finish and mechanicals all seem fantastic – and the things we moaned about could be changed with a single software update. And if we were to gauge by the number of friends, neighbours and strangers asking about both the Haval H6 and the Chery Tiggo 4 Pro, it’s clear that there’s interest in more affordable options for SA consumers, as long as the quality is there. And considering how much you’re getting for your money in terms of features and build quality, it’s really tempting to ask where they’ve cut corners or costs. Nothing feels cheap. The interiors are genuinely lovely. Everything works fine. Chery is even confidently offering buyers a million-km/ten-year single-owner engine warranty, something that would’ve been hilarious if it came with an old QQ3. The only thing standing in either company’s way for the time being is that they’re still the new kids on the block here in SA. But that won’t last long. Remember when Kia and Hyundai were weird, unknown brands from a country we don’t buy cars from? Exactly. 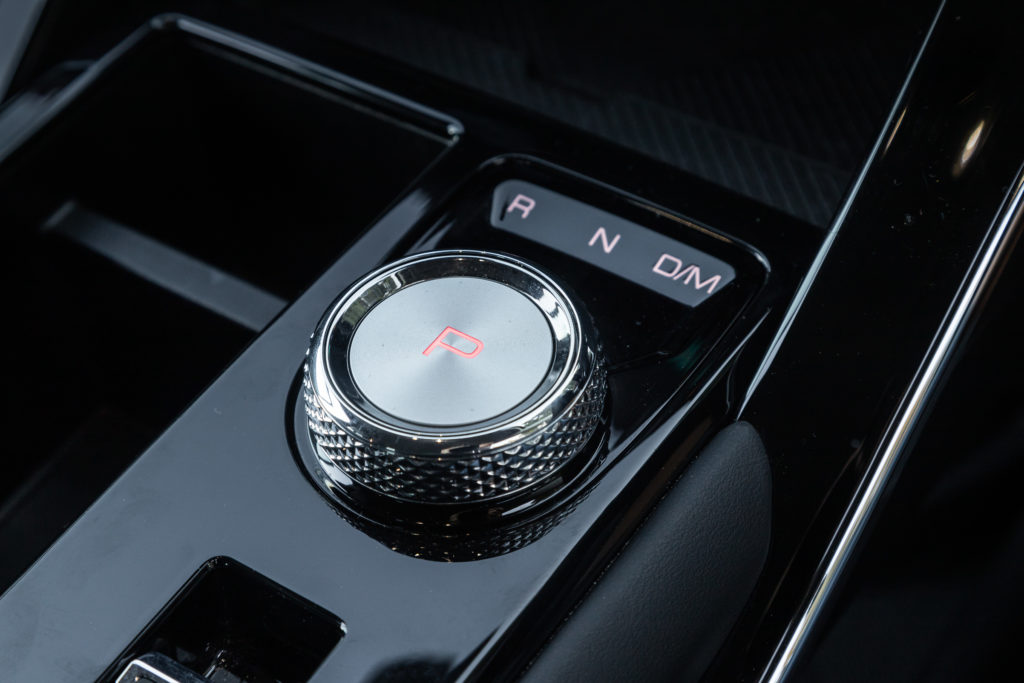 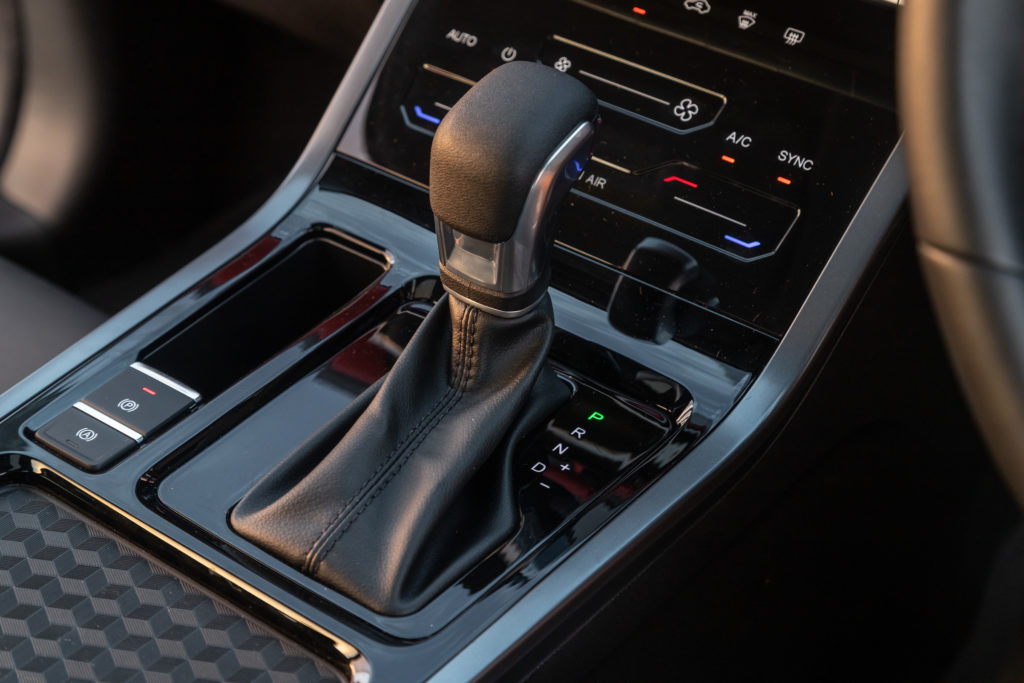