Any discussion on the Mercedes-AMG A 45 S is inevitably peppered with hot-hatch superlatives: Its new 2.0-litre power train is the world’s most powerful series-production four-cylinder engine; its claimed zero-to-100 km/h sprint time dips under four seconds; it costs more than a million rand…

The thought of a seven-figure price tag for a hatchback could make your stomach churn, but what I can tell you right now is the 310 kW engine (that’s 155 kW per litre) does, in fact, feel heroically muscular. Allied with the traction afforded by the 4Matic+ all-wheel-drive system, 3.9 seconds to hit 100 km/h sounds like an entirely plausible figure (although entirely otherworldly, too – this is a midsize hatchback, after all). 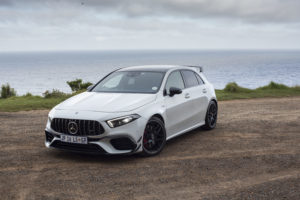 Revealed in 2013, you guessed it, the world’s most powerful series-production four-cylinder (265 kW), the original A 45 quickly asserted its dominance among hot hatches. As is their habit, however, the German brands engaged in a ruthless power war and Audi finally unleashed an RS 3 with 294 kW, besting the facelifted AMG A 45’s figure by 14 kW.

It’s proven to be a tough figure for its German rivals to beat, as even the latest RS 3 that’s yet to land in SA retains the 2.5-litre, five-cylinder engine. Perhaps more telling of the AMGs day-to-day character, however, is the neck-straining 500 Nm of torque and how it’s delivered. Where other turbocharged engines offer as wide a torque spread as possible, often at the cost of top-end surge, the  A 45’s maximum torque output is developed across just 250 rpm high in the rev range. The headline 310 kW figure, meanwhile, kicks in at 6 750 rpm and the engine revs to a heady 7 200 rpm. Transferring this significant amount of twist to the 19-inch wheels (wrapped in 245/35 rubber) is a newly configured eight-speed dual-clutch transmission promising quicker shift times than the outgoing seven-cog unit. 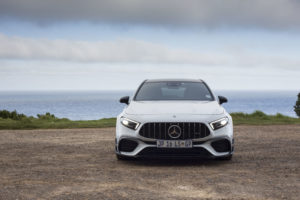 Suspension-wise, the 45-series utilises a MacPherson strut arrangement up front, with a four-link layout aft. AMG Ride Control damping is standard and can be toggled between Comfort, Sport and Sport+ (with three further programmes – slippery, individual and race – on offer). Likewise,  the ferocity of the exhaust system can be changed between balanced or powerful; the ESP system offers tweaks between basic, advanced, pro and master; and the response of the engine has its own four settings. It’s a bit befuddling at first meeting but, thankfully, an AMG-specific display within the MBUX system shows you at all times which parameters are set to which mode.

Which did I choose? Well, initially, I set out in Sport mode, which strikes a fine balance. Set so, the hatch demonstrates deft body control, leaning ever so slightly into the longer sweeps, the front suspension compressing a touch under heavy braking and the rear-end gently edging aside when booting it out of a tight corner. The steering, however, feels too light in Sport and doesn’t weight up much when the tyres start encroaching on their traction limits. 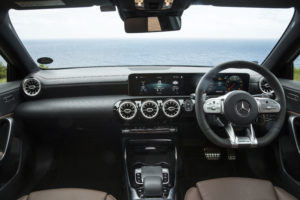 Best to turn the new steering-wheel-mounted dial to Sport+, which sharpens the throttle even more and firms up the suspension and steering. Here, the tiller has sufficient heft to work against (although real feel is still absent), the suspension retains enough compliance to suggest this mode is usable on-road, and the throttle is sensitive without resorting to the hair-trigger effect of some AMGs in Sport+.

I must mention the brakes here, which are some of the best on any sports car. The stoppers bite firmly right at the top of the brake pedal’s travel and the four-piston monobloc front calipers and single-piston floating unit at the rear repeatedly slowed down the test car, which had more than 19 000 km on the clock without detectable fade. They’re hugely confidence-inspiring and are no doubt assisted by the aggressive Michelin Cup 2 tyres, which are easily the most aggressive tyres we’ve experienced on a hatchback. It must be mentioned that on a cold and wet day these tyres are useless but in the dry the grip on offer is incredible. 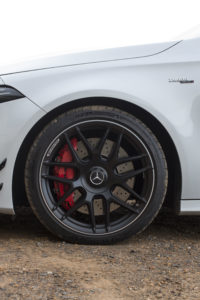 Heading out to some of our favourite Western Cape roads there are switchbacks aplenty, stretches of clearly sighted bends, climbs and dips, and only a sprinkling of cyclists. And its here where the A 45 S shines. The ride is unquestionably better than on the old model. While still firm, there’s adequate compliance in the more benign driving modes to suggest the little AMG should work well on our patchier surfaces. The overly light steering, meanwhile, bothered me less and I appreciated the engine’s razor-sharp response to throttle inputs; the dazzling composure under heavy braking, even mid-corner; and the eight-speed transmission’s speediness, in stark contrast to the previous unit’s occasional obstinacy.

Question time, then: how does the A 45 S compare to the RS 3 (and the BMW M2 Competition to the CLA 45 S)? Certainly, the Audi has the more characterful engine – the AMG’s is loud but monotonous – and it feels as potent. I’d give the advantage in terms of perceived quality to the Audi, too. While the AMG’s interior looks great, some plastics (the door handles, for example) feel basic at seven figures. The Mercedes, however, has the superior chassis, resisting understeer better than the Ingolstadt-based brand’s offering and with the ESP turned off it will slide when provoked on cold tyres at the exit of a corner. 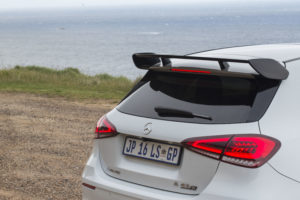 The BMW, meanwhile, is unique in offering a playful rear-wheel-drive platform and its M3-derived inline-six engine is fantastic. The cockpit, though, feels vintage and, when you are not in the mood, the coupé can be hard work when just cruising in traffic.

Perhaps of more importance to Affalterbach fans is that AMG’s engineers have managed to broaden the scope of the A 45, imbuing it with more refinement while elevating its performance and making it more fun to drive. It feels like a product of the same stable as such lairy models as the C 63 S and GT, and that fact alone may go further than you’d think to justify a R1.2 million price tag. It’s a hatchback that can seat five and it will roast some more expensive supercars from A to B. We simply cannot ignore its speed and composure and will take ours in this stunning Polar White.